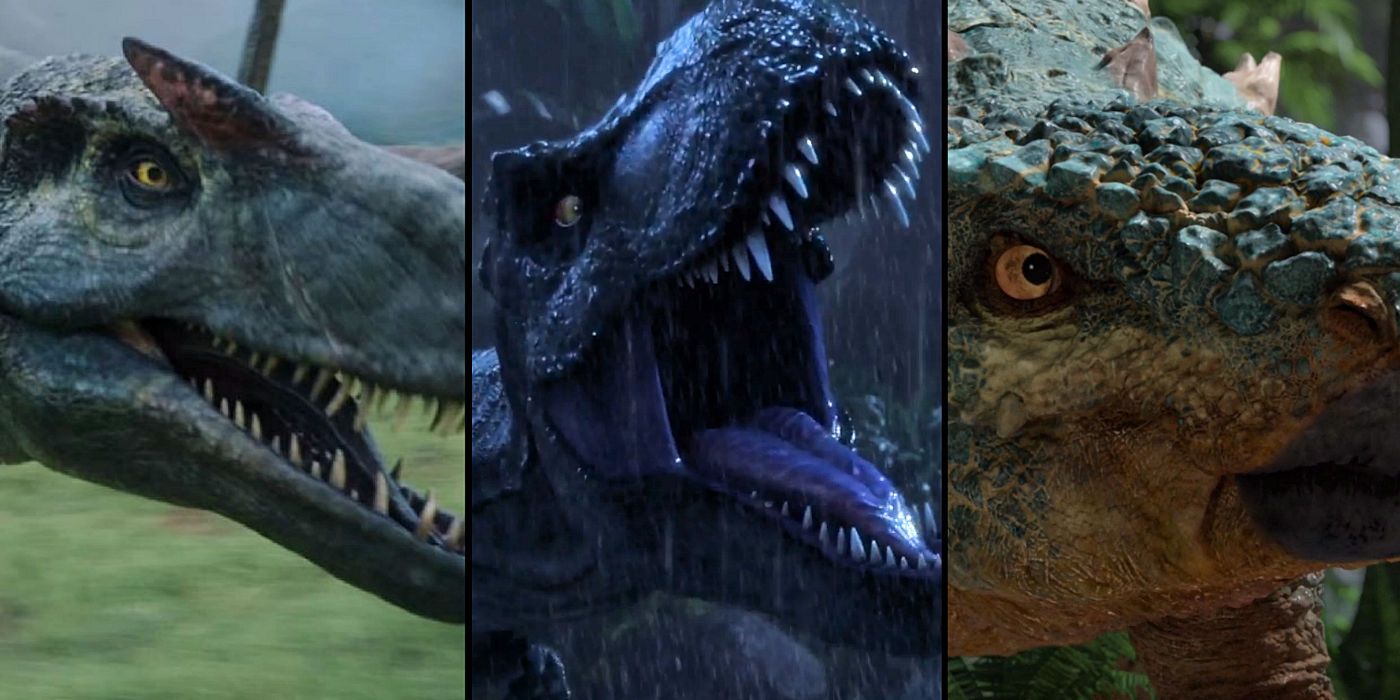 Jurassic World: Dominion is set to include an exciting cast of dinosaurs and other prehistoric creatures. The third entry in the Jurassic World trilogy, and the sixth Jurassic feature overall, will release in 2022, four years after the debut of 2018’s Jurassic World: Fallen Kingdom. Dominion is also being touted as a finale of sorts for the series and will conclude the story that began all the way back in 1993’s Jurassic Park.

Following Fallen Kingdom‘s escape-focused ending, Jurassic World: Dominion will follow the cast of the previous Jurassic World movies and returning favorites from the Jurassic Park trilogy as they struggle to survive in a world where dinosaurs have finally reached the mainland. With the genetically modified creatures no longer restricted to a remote island or a contained facility, the world must come to decide what the ultimate fate of these once-extinct beasts will be. Described by director Colin Trevorrow as a science thriller, the film will bring the Jurassic story to its dramatic and long-awaited ending.

No Jurassic Park or Jurassic World film would be complete without a roster of dinosaurs, both new and familiar. Among all the specific dinosaurs already confirmed to return, such as the terrifying T-Rex and Blue the Velociraptor, there are several brand-new dinosaurs that are making their first appearances in the franchise. There are even a few unconfirmed dinosaurs that, if rumors are true, might just pop up in the film. Here’s a complete look at every dinosaur confirmed or speculated to appear in Jurassic World: Dominion.

It wouldn’t be a Jurassic film without a T-Rex, and Jurassic World: Dominion is no exception. The iconic predator is the unofficial mascot for the series, with its skeleton serving as the logo for the park both in real life and in films. Of all the T-Rexes in the franchise, none is more beloved than the first Rex from Jurassic Park. Dubbed “Rexy”, this is the same T-Rex that fought the Indominus in Jurassic World and escaped into the wild at the end of Fallen Kingdom. Rexy will face new challenges in Dominion and is already confirmed to have an extended sequence set at a drive-in theater during the film.

After the T-Rex, the other most iconic dinosaur in the Jurassic franchise is undoubtedly the Velociraptor. Jurassic World introduced audiences to a specific raptor named Blue, who was trained from birth by Chris Pratt’s Owen Grady. At the end of Fallen Kingdom, Blue escaped into the wild alongside a horde of other prehistoric beasts, and Dominion will continue to follow her journey and develop her relationship with Owen.

One of the most memorable dinosaurs from the original Jurassic Park was the Gallimimus, a bird-like creature that traveled in large herds. In Jurassic Park, a big group of Gallimimus is seen stampeding across a meadow on the island, trying in vain to avoid an attack from the recently freed T-Rex. The Gallimimus was among the dinosaurs confirmed to have been saved in Fallen Kingdom prior to Jurassic World’s destruction and was able to escape onto the mainland. Although its numbers have been reduced, it’s possible that Jurassic World: Dominion will see the Gallimimus make a comeback as a species.

Although not a dinosaur, pterosaurs like the Pteranodon have a significant place in the Jurassic franchise. After being briefly glimpsed in The Lost World: Jurassic Park, the creatures played a huge role as one of the main antagonistic “dinos” in Jurassic Park III. In fact, the Pteranodon is one of the only genetically bred creatures from Jurassic Park to actually make it to the mainland years before Fallen Kingdom, making them ideally suited to succeed in their new, non-island habitat.

One of the more threatening dinosaurs to inhabit the volcanic Isla Nublar, Isla Sorna, and now the mainland is the Compsognathus, or “Compy” for short. These little dinos might only be the size of a chicken, but when they attack in a swarm, they can be deadly. The beginning of The Lost World showed a group of Compies attacking a little girl on Isla Sorna, and there’s no telling what trouble these tiny terrors will cause on the mainland.

These peaceful but heavily armored plant-eaters have made appearances in multiple Jurassic films before, and have proven themselves to be more than capable of defending themselves. With Ankylosaurus loose in the modern world, nothing will be safe, be it an encroaching predator or an unaware vehicle.

One of the breakout prehistoric stars of Jurassic World, the Mosasaurus has quickly become one of the most iconic animals in the entire franchise, even getting to kill the mutant Indominus Rex. It also holds the distinction of being the first of the park’s residents to break free and leave the island behind. The Mosasaurus is presumably still cruising the oceans in Dominion and is likely to remain an unpredictable force of nature within the sequel.

Related: Fast & Furious Crossover Would Save Jurassic World From A Boring Ending

The carnivorous Allosaurus made its debut in Jurassic World: Fallen Kingdom, where at least five examples of the species were shown to have made it back to the mainland alive. One of these surviving Allosaurus was purchased in the film’s dinosaur auction, and another was observed doing battle with a stubborn Nasutoceratops in the short film Battle at Big Rock.

The Nasutoceratops, a relative of the more famous three-horned Triceratops, made its Jurassic World debut in the short film Battle at Big Rock, where it battled an Allosaurus. The creature is confirmed to return in Jurassic World: Dominion.

In addition to returning favorites, there are several new dinosaurs that have been confirmed to appear in Dominion. These include the Lystrosaurus (a small beaked dinosaur) and the Atrociraptor (a 6.6-foot relative of the Velociraptor). The film is also set to begin with a 65-million-year flashback sequence that will include several other dinosaurs, including Dreadnoughtus, Iguanadon, Moros, Oviraptor, the pterosaur Quetzalcoatlus, and the massive Giganotosaurus, which is seen killing the T-Rex that eventually supplies its DNA to the cloned Rexy.

Multiple dinosaur names have come up in rumors regarding the prehistoric cast of the film. The iconic Dilophosaurus that killed Dennis Nedry in the original Jurassic Park has long been rumored to return and even made a cameo via a hologram in Jurassic World. Another Jurassic Park favorite is the Triceratops, which made a huge impression in 1993. The creature has since appeared in several other films but remains unconfirmed for the final entry in the franchise. Lastly, there’s the most infamous predator from any Jurassic film: the Spinosaurus. Although referenced in Jurassic World with a massive skeleton, the idea of bringing the Spinosaurus back as a surprise dinosaur in Jurassic World: Dominion is one that many fans want to happen, and some rumors suggest that the creators behind the film might share that opinion.

Next: Jurassic World 3’s Opening Delivers On What Spielberg Dreamed Of

When he’s not writing about film, he can be heard discussing it on a number of podcasts. His original fiction can also be found in publications including Kaiju Ramen Magazine.

His life goals include a return trip to Japan, getting a podcast off the ground, finishing (at least one of) his novel, and yes, buying even more monster toys.