Did The Universe Have A Beginning? 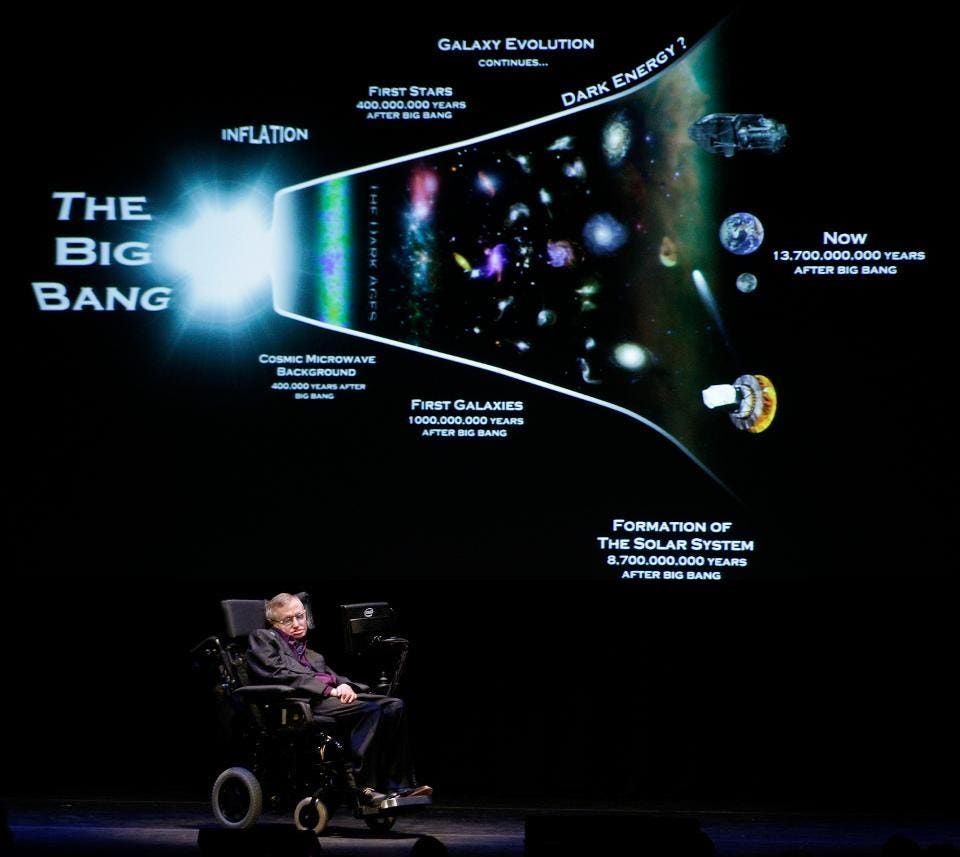 If you ask anyone about the origin of some phenomenon that we’ve observed, they’ll usually default to the same logical thought process: cause and effect. Whenever you see anything occur, that’s the effect. The processes that occurred earlier and led to the effect occurring are what we typically refer to as the cause: the reason for the effect occurring. Most of us are perfectly willing to extrapolate the phenomena we see back in time in an unbroken chain of cause-and-effect events.

Presumably, this didn’t go back in an infinite chain, but rather there was a “first cause” that led to the very existence of the Universe itself. For a long time, this picture was supported by the notion of the classical Big Bang, which seemed to imply that the Universe began from a singularity: an infinitely hot and dense state from which space and time themselves emerged. But we’ve known for many decades that the Big Bang was the start of many important things — our “Universe as we know it” if you like — but not of space and time themselves. The Big Bang was just another effect, and we think we know what caused it. It reopens the question of whether the Universe had a beginning at all, and the answer so far is that we aren’t sure. Here’s why.

The Big Bang, originally, was an idea that attempted to explain the Universe we observed based on two pieces of evidence:

General Relativity, almost immediately after it was put out into the world, was shown to imply certain inevitable consequences. One of them was that the Universe could not be evenly, uniformly filled with matter and remain stable; a static, matter-filled Universe would inevitably collapse into a black hole. A second one was that a Universe that was evenly filled, not merely with matter but any type of energy, would either expand or contract according to a particular set of physical rules. And thirdly, that when the Universe expanded or contracted, the wavelength of any waves (including de Broglie waves, for matter particles) would also expand or contract by the exact same proportional amount.

Putting these pieces of information together led to a phenomenal possibility. The more distant an object is from us, the longer it takes the light it emits to reach our eyes. If the Universe is expanding as the light travels through it, then the longer it takes that emitted light to complete the journey to our eyes, the greater the amount that light’s wavelength will lengthen due to the Universe’s expansion. And the farther away we look, the farther back in time we’re seeing. At the greatest distances of all, we’re seeing the Universe as it was:

The first person to realize this was Georges Lemaître, all the way back in 1927. He put together some early distance-determining data from Edwin Hubble with Vesto Slipher’s spectroscopic observations showing the redshifted light from distant galaxies, and concluded that the Universe must be expanding today. Moreover, if it’s getting cooler, larger, and less dense today, then it must have been hotter, smaller, and denser in the past. Lemaître immediately extrapolated this as far as he could: to infinite temperatures and densities and an infinitesimal size. He called this initial state the “primeval atom,” and noted that space and time could have emerged from a state of non-existence from a singularity at the very beginning.

There’s a big difference, however, between identifying a possible beginning to our Universe and discovering the necessary evidence to discern between this possibility and all of the others. It wasn’t until the 1940s that George Gamow came along and uncovered the key predictions of this “Big Bang” scenario:

Although, at present, there’s strong support from all three observable signatures, the proverbial smoking gun for the Big Bang came in the mid-1960s, when Bell Labs scientists Arno Penzias and Bob Wilson discovered that all-sky glow at just ~3 K: what was initially called the “primeval fireball” (in a nod to Lemaître) and what’s known today as the Cosmic Microwave Background.

Even as the evidence supporting the Big Bang (and conflicting with all of the alternatives, like Tired Light, Plasma Cosmology, and the Steady-State Universe) was mounting throughout the 1960s and 1970s, there were some puzzles that emerged as well. In science, a puzzle doesn’t always take the form of, “we saw this thing we didn’t expect and can’t explain,” but sometimes takes the reverse form of, “we calculated something that we expected should have been there, but when we looked, it wasn’t.” The three big puzzles that emerged in the aftermath of the Big Bang’s widespread acceptance were as follows.

The monopole problem: if the Universe got arbitrarily hot in the past, there should be high-energy relics from that very early state still remaining in our Universe, but none have ever been observed.

The horizon problem: if the Universe began from an extremely hot, dense state, then there should be an upper limit to the size of structures and to the scale of uniformity in the Universe, but the observed scales of both are larger than the predicted limits.

The flatness problem: assuming the Universe came into existence with a certain density and a certain expansion rate, those rates must balance perfectly to avoid the Universe either immediately recollapsing or expanding into total, empty oblivion, yet there’s no explanation for this perfect balance.

When we have a set of puzzles like this, there are only two reasonable ways to deal with it in a scientific context. One is to appeal to initial conditions: the Universe was simply “born” with the properties we observe it to have, and there is no further explanation. This line of thought sometimes applies, as it does in the case of our Solar System. Just like all of the ~1024 star systems in the observable Universe, ours was born from a protostar with a nebula and a disk around it, which then spawned planets, asteroids, and frozen, icy, outer bodies, leading to the system we inhabit today. Lots of chances will lead, inevitably, to some low-probability outcomes, like the emergence of intelligent life, on some of them.

But this approach relies on there being a large number of possible outcomes, all with their own likelihoods, and a large number of chances for those outcomes to occur. The other approach is frequently more fruitful: to search for a mechanism that could set up and give rise to the initial conditions we’ve observed. Such a mechanism needs to rise to the threefold challenges of reproducing all of the successes of the theory it’s attempting to supersede, of explaining the problems or puzzles the prevailing theory cannot, and of making testable predictions that are different from the pre-existing idea.

A little more than 40 years ago, that was precisely what the idea of cosmic inflation attempted to do. Pioneered by Alan Guth and others (including Alexei Starobinskii, Andrei Linde, Paul Steinhardt, and Andy Albrecht), inflation posited that there was an epoch to the Universe prior to the hot Big Bang where space expanded differently from how it expands today. In a Universe filled with stuff, the expansion rate is directly proportional to the energy density of that “stuff,” whatever it is. So that means if your Universe is filled with:

That was the big idea behind inflation: that the Universe was dominated by some form of energy inherent to space, that it underwent a period of exponential expansion, and that when the quantum field behind inflation decayed into matter-and-radiation, inflation came to an end and the Universe “reheated,” and the conditions that we identify with the hot Big Bang then arose.

This possible solution was brilliant, but would it work? It took some substantial theoretical work to modify Guth’s original, promising idea until it could reproduce the Big Bang’s successes. It was immediately clear how it resolved the monopole, horizon, and flatness problems: the Universe reached a maximum temperature at the end of inflation, preventing the “monopole problem” pathologies, the Universe has larger-scale uniformity and structure than anticipated because inflation “stretched” various regions of space to larger scales that the traditional (non-inflationary) cosmic horizon, and the Universe is flat, today, because inflation’s dynamics determined both the initial energy density and the initial expansion rate.

In addition, there were four new predictions that were made concerning cosmic inflation where the predictions differed from the hot Big Bang, and throughout the ‘90s, ‘00s, and ‘10s, all four were tested.

All four of these predictions have now been tested, and inflation, as compared to the non-inflationary hot Big Bang, is 4-for-4 in its successes.

So, then, where did inflation come from?

Was it eternal, or did it only last for a finite amount of time? In 2003, a theorem was published — the Borde-Guth-Vilenkin (BGV) theorem — that showed that inflating spacetimes are what we call “past-timelike incomplete,” which means that inflation cannot describe a “beginning” to the Universe. But that doesn’t necessarily mean the Universe had a non-inflationary beginning; it only implies that if inflation was not an eternal state, it must have arisen from a previous state that, perhaps, did have a beginning. (It is also uncertain whether the BGV theorem will apply to a fully quantum theory of gravity.)

If inflation did arise from a pre-existing state, then what was that state like? Using the rules of quantum field theory that we presently understand, it could have arisen from a non-inflationary spacetime with a condition very much like a Bunch-Davies vacuum, and then gave rise to the inflationary state that set up the hot Big Bang.

Theoretically, there are many uncertainties, many unknowns, and many admissible possibilities.

Both experimentally and observationally, however, there’s no information accessible to us, here, in our visible Universe, that would allow us to determine how inflation arose, or even whether inflation arose at all. In fact, because of the relentless expansion of the Universe during inflation, it can take a region as small as the Planck length on all sides — the smallest possible size at which the laws of physics make sense — and that region will be stretched to larger than the presently observable Universe in under ~10-32 seconds.

Observationally, this final fraction-of-a-second of inflation is the only interval that has any way of imprinting itself onto our Universe. Anything that occurred prior, including earlier phases of inflation, the beginning of inflation (if it had one), or whatever occurred previously, has been wiped clean from our Universe by the dynamics of inflation itself. The Big Bang wasn’t the beginning of time and space, and cosmic inflation, which preceded it, cannot be the beginning either, unless it went on for an eternity. After a century of cosmic revolutions, we’re right back where we started: unable to answer the most fundamental question we can ask, “how did it all begin?”

Denial of responsibility! TechCodex is an automatic aggregator of the all world’s media. In each content, the hyperlink to the primary source is specified. All trademarks belong to their rightful owners, all materials to their authors. If you are the owner of the content and do not want us to publish your materials, please contact us by email – [email protected]. The content will be deleted within 24 hours.
alan guthbeginningBig Bangborde-guth-vilenkincosmologygeorge gamowGeorges Lemaîtreinflation
0
Share

Dizo Star 300 vs Nokia 105: Comparison of the two feature phones with the same price