Did a giant radio telescope in China just discover aliens? Not so FAST… 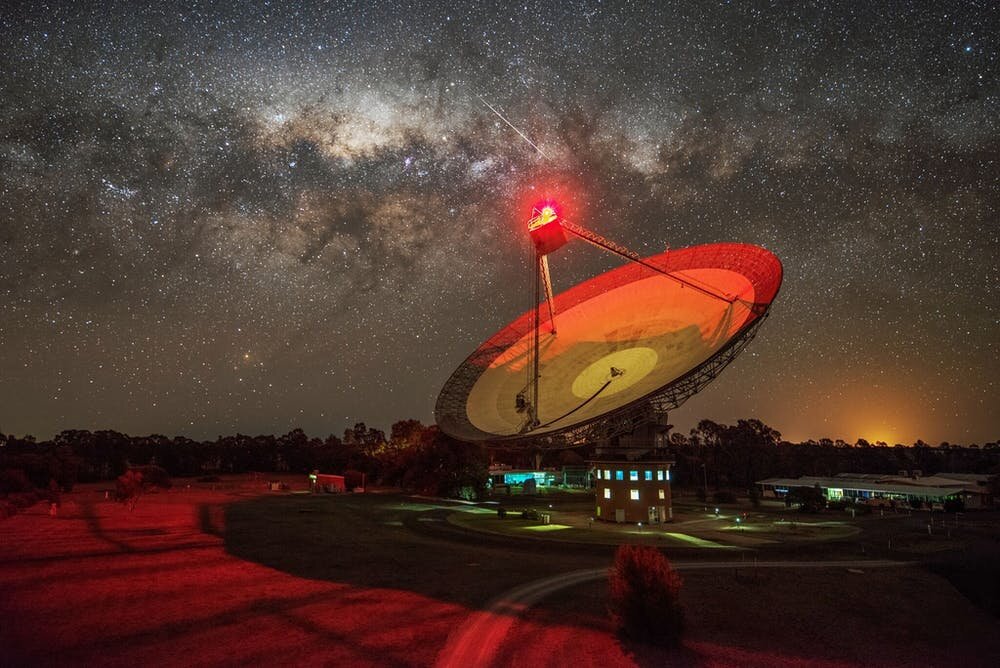 “Extraordinary claims require extraordinary evidence,” said Carl Sagan. This phrase is the standard that astronomers will be applying to a curious signal captured with China’s “Sky Eye” telescope that might be a transmission from alien technology.

An article reporting the signal was posted on the website of China’s state-backed Science and Technology Daily newspaper, but was later removed. So have astronomers finally found evidence of intelligent found life beyond Earth? And is it being hushed up?

We should be intrigued, but not too excited (yet). An interesting signal has to go through a lot of tests to check whether it truly carries the signature of extraterrestrial technology or is just the result of an unexpected source of terrestrial interference.

And as for the deletion: media releases are normally timed for simultaneous release with peer-reviewed results—which are not yet available—so it was likely just released a bit early by mistake.

An eye on the sky

Sky Eye, which is officially known as the Five-hundred-meter Aperture Spherical Telescope (FAST), is the the largest and most sensitive single-dish radio telescope in the world. A engineering marvel, its gargantuan structure is built inside a natural basin in the mountains of Guizhou, China.

The telescope is so huge it can’t be physically tilted, but it can be pointed in a direction by thousands of actuators that deform the telescope’s reflective surface. By deforming the surface, the location of the telescope’s focal point changes, and the telescope can look at a different part of the sky.

FAST detects radiation at radio wavelengths (up to 10 cm) and is used for astronomical research in a wide range of areas. One area is the search for extraterrestrial intelligence, or SETI.

SETI observations are mainly done in “piggy-back” mode, which means they are taken while the telescope is also running its primary science programs. In this way, large swaths of the sky can be scanned for signs of alien technology—or “technosignatures”—without getting in the way of other science operations. For special targets like nearby exoplanets, dedicated SETI observations are still carried out.

The hunt for alien technology

Technosignature searches have been ongoing since the 1960s, when the American astronomer Frank Drake pointed the 26-meter Tatel telescope toward two nearby Sun-like stars and scanned them for signs of technology.

Over the years, technosignature searches have become far more rigorous and sensitive. The systems in place at FAST are also able to process billions of times more of the radio spectrum than Drake’s experiment.

Despite these advances, we haven’t yet found any evidence of life beyond Earth.

FAST sifts through enormous amounts of data. The telescope feeds 38 billion samples a second into a cluster of high-performance computers, which then produces exquisitely detailed charts of incoming radio signals. These charts are then searched for signals that look like technosignatures.

With such a large collecting area, FAST can pick up incredibly faint signals. It is about 20 times more sensitive than Australia’s Murriyang telescope at the Parkes Radio Observatory. FAST could easily detect a transmitter on a nearby exoplanet with a similar output power to radar systems we have here on Earth.

The trouble with sensitivity

The trouble with being so sensitive is that you can uncover radio interference that would otherwise be too faint to detect. We SETI researchers have had this problem before.

However, it turned out to be very strange interference (not aliens). To uncover its true nature, we had to develop a new verification framework.

With BLC1, it took about a year from when it was initially reported to when peer-reviewed analysis was published. Similarly, we may need to wait a while for the FAST signal to be analyzed in depth.

Professor Zhang Tongjie, chief scientist for the China Extraterrestrial Civilization Research Group, acknowledged this in the Science & Technology Daily report: “The possibility that the suspicious signal is some kind of radio interference is also very high, and it needs to be further confirmed and ruled out. This may be a long process.”

And we may need to get used to a gap between finding candidate signals and verifying them. FAST and other telescopes are likely to find many more signals of interest.

Most of these will turn out to be interference, but some may be new astrophysical phenomena, and some may be bona fide technosignatures.

Will FAST’s extraordinary signals meet the burden of extraordinary evidence? Until their work is reviewed and published, it’s still too early to say, but it’s encouraging that their SETI search algorithms are finding curious signals.

Between FAST, the Breakthrough Listen initiative, and the SETI Institute’s COSMIC program, the SETI field is seeing a lot of interest and activity. And it’s not just radio waves: searches are also underway using optical and infrared light.

As for right now: Stay intrigued, but don’t get too excited.

Assassin’s Creed Origins Is Now Free to Play This Weekend

Tom Hanks May Not Swear Much In Movies, But He Sure Dropped An F-Bomb After Fans Knocked Into Rita Wilson