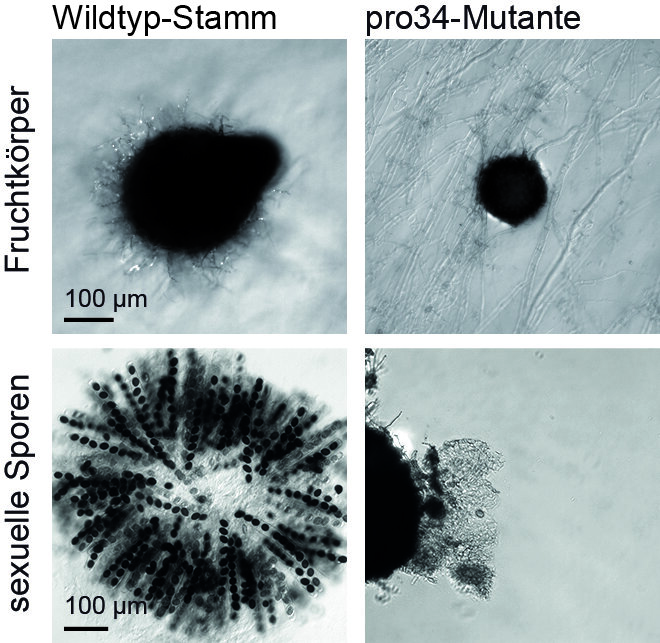 If a fungus has to take a circuitous route to achieve cellular respiration, it lacks the energy to build fruiting bodies.

The formation of fruiting bodies for sexual reproduction is a central developmental process in fungi. Even though genetic methods have been applied in recent decades to identify a large number of factors involved in this process, we still lack an understanding of how the formation of different cell types is regulated.

A research team from Bochum and Frankfurt has gained new insights by studying a mutant sac fungus that is infertile. The mutant is impaired in its respiratory chain, thus lacking the energy to form fruiting bodies. The researchers present their findings in the cover story of the October issue of the Journal of Fungi.

Sordaria macrospora is a model system for studying the development of fruiting bodies in sac fungi, so-called filamentous ascomycetes. Using conventional mutagenesis, more than 100 developmental mutants were generated for this fungus in the 1990s.

Assistant Professor Dr. Ines Teichert from the General and Molecular Botany group at the Department of Biology and Biotechnology at the Ruhr University Bochum, Germany, in cooperation with Dr. Andrea Hamann and Professor Heinz D. Osiewacz from the Goethe University Frankfurt, has been studying such a mutant: unlike the wild-type strain, the so-called pro34 mutant doesn’t form mature fruiting bodies and sexual spores, and in addition has a slower growth rate.

Through genome sequencing, the researchers identified a major gap in a gene, which they named pro34. In the wild-type strain, this gene is affected by RNA editing during fruiting body formation; this means that a new variant of the RNA and protein is generated at this point, which may have a specific function.

Compensating for a defect consumes energy

But what is the function of PRO34 in the first place? “Using fluorescence microscopy, we successfully localized PRO34 in the mitochondria,” explains Ines Teichert. These cell organelles contain the respiratory chain, a series of protein complexes that, to put it simply, help generate energy in the form of adenosine triphosphate (ATP). In the mutant, one of these complexes is missing.

The mutant is nevertheless viable; this is because fungi as well as plants possess various alternative pathways in the mitochondrial respiratory chain to compensate for such defects. “However, this compensation is insufficient to cover the high energy demand during fruiting body formation, and thus the mutant remains sterile,” says Ines Teichert.

A surprising discovery was that the so-called alternative oxidase (AOX) is likewise activated in the pro34 mutant. “According to previous findings, AOX usually compensates for other defects and must therefore fulfill additional functions,” points out Ines Teichert.

The authors speculate about a protective function of AOX against oxidative stress, since a defect in the mitochondrial respiratory chain leads to increased formation of oxygen radicals. “An explanation could also be that AOX helps in the assembly of certain mitochondrial complexes,” believe the authors. “Consequently, the pro34 mutant is an excellent starting point for subsequent analyzes.”