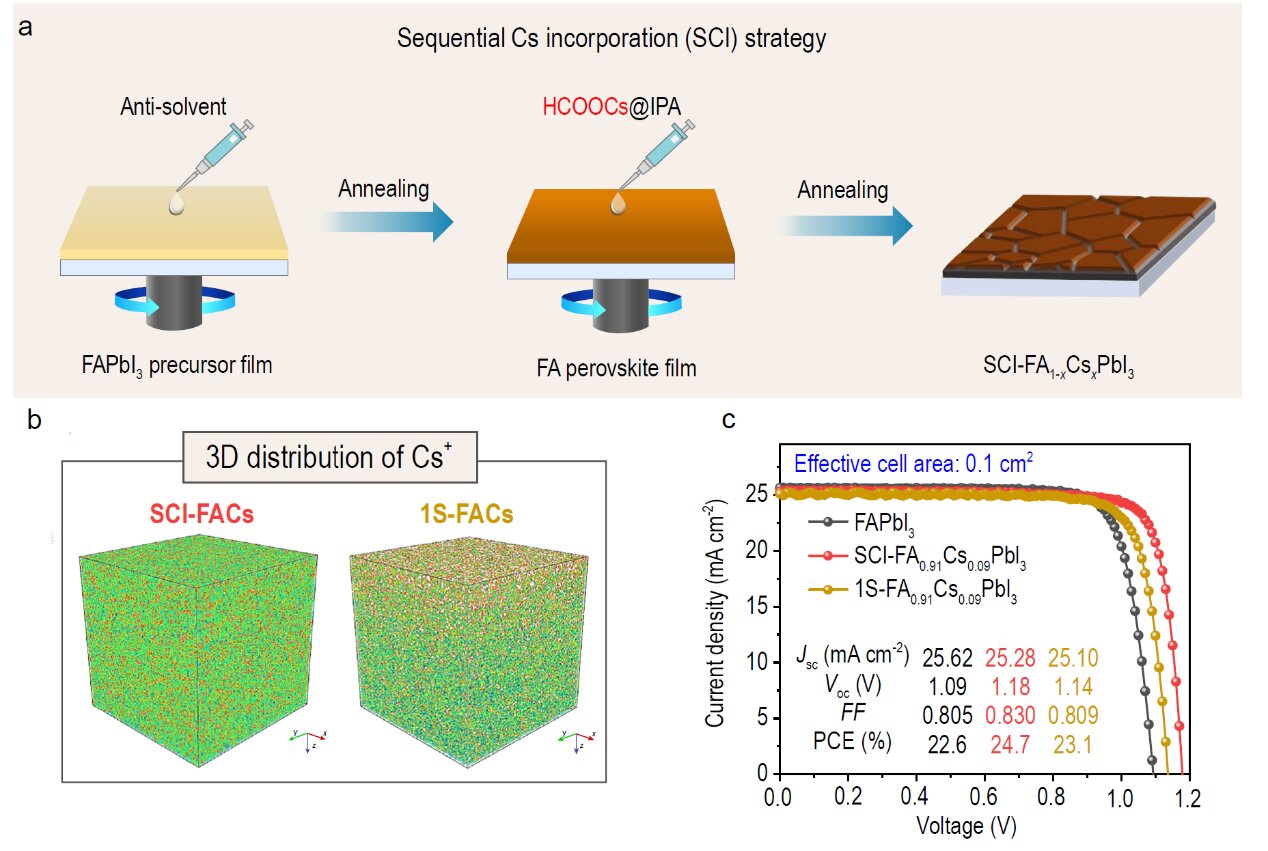 Metal halide perovskites (ABX3) have emerged as promising candidates for various optoelectronic applications due to their excellent optoelectronic properties and low-cost fabrication. At present, the light-absorbing layer of the highest-efficiency single-junction perovskite solar cells (PSCs) is almost all based on FAPbI3 perovskite, achieving power conversion efficiency (PCE) that is comparable to commercial crystalline silicon cells.

Notably, alloying FA+ with Cs+ to formpure-iodide FA-Cs perovskite (FA1-xCsxPbI3) is an ideal approach to obtain PSCs with high efficiency and stability. However, due to the complex crystallization kinetics between FAPbI3 and CsPbI3, FA1-xCsxPbI3 perovskite prepared by typical one-step (1S) crystallization exhibits poor compositional homogeneity and high trap density, which limits the device performance and long-term stability.

In this work, cesium formate (HCOOCs) as a cesium source is sequentially introduced into high-quality FA precursor film. By cooperating with Professor Feng Gao from Linköping University, a new stabilization mechanism for Cs doping to stabilize FAPbI3 is also revealed. This research article is published in National Science Review.

In their work, high-quality FA1-xCsxPbI3 (x=0.05-0.16) perovskites are obtained by the SCI method. The ratio of FA to Cs in these SCI-FA1-xCsxPbI3 perovskites can be facilely tuned by adjusting the content of the cesium source.

Compared with the conventional one-step-prepared 1S-FA1-xCsxPbI3 perovskites, SCI-FA1-xCsxPbI3 perovskites have demonstrated a much more uniform Cs distribution. “The uniform composition distribution of Cs is the key to the enhancement of device performance,” Zhao says, while the PSCs based on SCI-FA0.91Cs0.09PbI3 films achieved a PCE of 24.7% (certified 23.8%), which is the highest value among the FA-Cs triiodide PSCs reported so far.

Moreover, the collaboration with Gao’s group further revealed a new stabilization mechanism for this Cs doping. The incorporation of Cs into FAPbI3 significantly reduces the electron-phonon coupling strength and lattice fluctuation, thereby suppressing ionic migration and the formation of iodide-rich clusters. As a result, the stability of FA-Cs based devices has been greatly improved.

Overall, this work opens up new possibilities to strategically develop high-quality mixed-cation perovskites with good control over the crystallization kinetics, presenting a milestone towards the rational construction of highly efficient and stable perovskite-based optoelectronic applications, including but not limited to solar cells, light-emitting diodes, and lasers.