If you think all of Idea Factory International’s RPGs are purely about cute girls doing cute things and beating up dogoos, you haven’t been paying up attention to the Death end re;Quest series. The first one was familiar to longtime fans of IFI’s style of combat system, only with those cute girls winding up getting murdered in gruesome fashion. Now, the upcoming Death end re;Quest 2 aims to continue the bloody trend with a sequel that starts off with cold-blooded murder the moment you hit the start button.

The newest member of the Wordsworth girls dormitory in Le Choara is Mai Toyama, a young shut-in with a penchant for hacking into servers like the World’s Odyssey game. How did she get there? After her parents’ messy divorce, Mai’s forced to live with an abusive father and the opening moments of Death end re;Quest 2 start with her defending herself and hacking her father to death with an axe. In doing so, she’s send to Wordsworth, a place that also holds a key for her missing sister who was last seen at this very same academy.

Death end re;Quest 2’s greatest strength lies in the quality of its writing. With a sadistic story penned by the same scenario writer behind the brilliant Corpse Party series, Makoto Kedouin, DERQ2’s narrative was more gruesome than what I can remember playing from the first entry. While the first game relied upon managing life both inside and outside of a virtual MMORPG, Mai’s adventures revolve around daylife at a dormitory for foster children and a midnight stroll through the town of Le Choara. It’s during this witching hour that the townsfolk disappear and a myriad of monsters and ghouls wander the foggy streets. 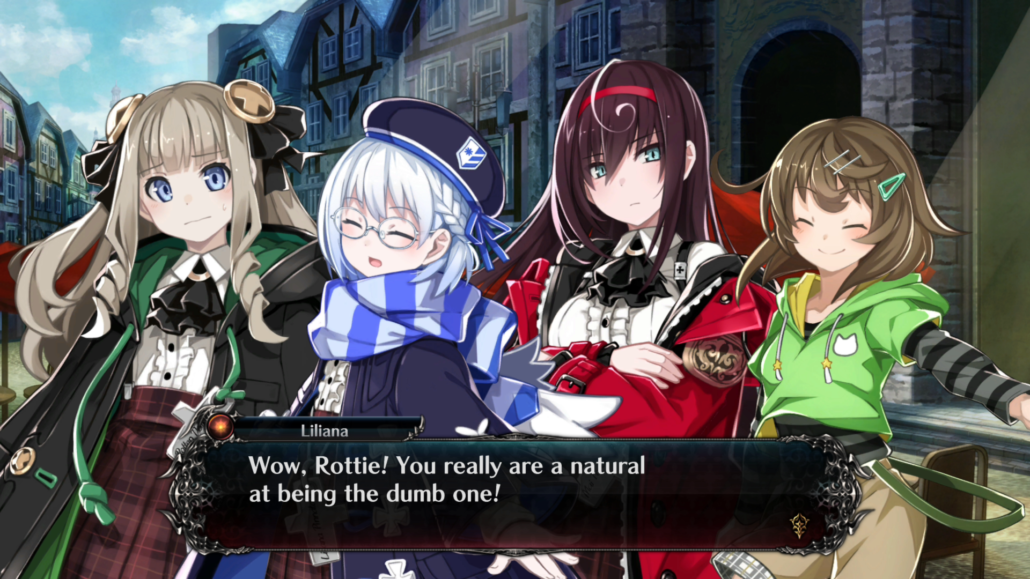 This time around, the story is far more linear and easy to follow through until the end with only a minimal number of choices that can lead to an early demise. I counted less than ten bad endings throughout the sequel, whereas the first Death end re;Quest had about twenty-seven poor choices to make. Much like the first game, Death end re;Quest 2 rewards the player for actively seeking out these bad endings with money and valuable items that will make continued playthroughs easier. If caught up in a bad ending, the player merely reverts back to the multiple choice that lead to their initial death rather than to the last save point which might be an awful long time ago depending on how frequently the player saves their game.

What will kill the player more often than a bad ending are the invulnerable Berserkers that wander the dungeon corridors and can invade battles on a whim. Touching one of these slow-moving shadows on the dungeon map will instantly wipe out the entire party without giving the player a chance to react or run away. Thankfully these Berserkers are slow enough that you can juke them and run around them in another direction but with many of the maps featuring tight corridors and environmental objects that impede your progress (trees and short fences being two of the worst offenders), trying to run away only to rub up against an impassable blockade can result in a quick death. 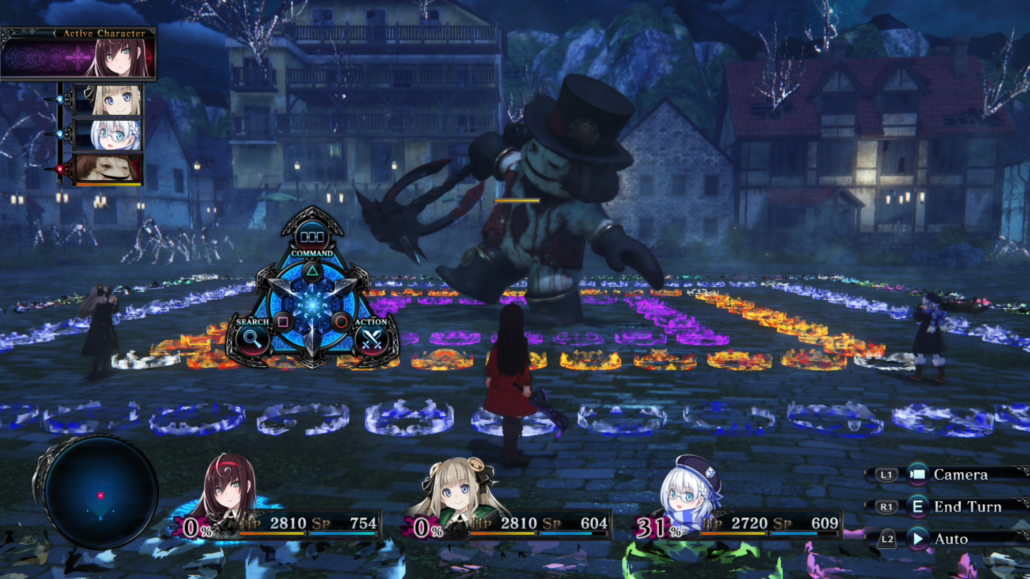 The first time I encountered a Berserker and was told to run away, I instinctively tried engaging it in hopes of triggering a bad end (trust me, it doesn’t get you anything) and wound up losing twenty minutes of progress because of a forgetfulness to save; the second, third, fifth, etc times I ran into a Berserker and died, it was my own fault for trying to run around it. however, be on the lookout for a couple of choice instances where the game will decide to spawn in a Berserker right in front of the party as they’re running forward. Berserkers can also show up in battle randomly and will also kill the player if they’re struck by one. A Berserker will telegraph its move by showing a danger zone of where its attacks will land and kill anyone in the path after a few turns if they’re standing in the red. When Auto-Battle is turned on, the AI party has a tendency to stand in these areas, so be extra mindful when mindlessly grinding out experience.

Death end re;Quest 2 has a pacing issue that ripples out into any segment where the player isn’t actively reading the visual novel-based segments. Dungeon exploration is pretty minimal and many areas are little more than running from point A to point B, killing a few enemies along the way, and using one of your three character’s special abilities (Mai can hack security cameras to reveal hidden doors and passcodes written on walls, Rottie can ‘jump’ to higher platforms, and Liliana can hit curse balls with her weapon to break through certain doors). Since all of the exploration takes place in Le Choara, the player will often start the midnight hour from outside the dormitory and run off in the direction of their next objective, triggering event flags and locked gates along the way. 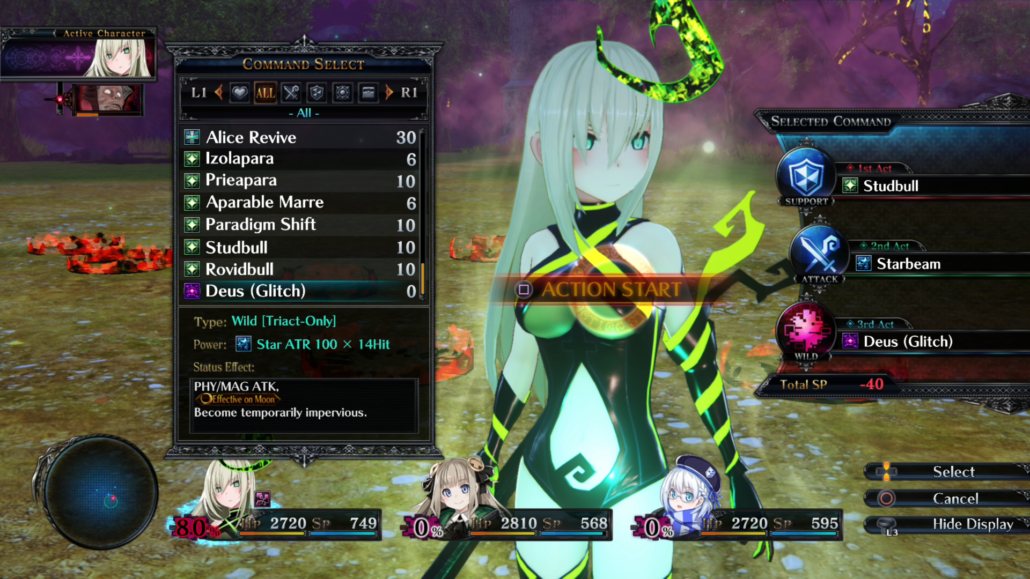 During the first day of each chapter, the players will spend an hour or so in conversations with Mai’s fellow orphans before venturing out at night, reaching an event and some sort of small fight, returning back to the dormitory, and repeating two or three times before making it to the end of that town’s segment. This is repeated during most every chapter of Death end re;Quest 2 and I found myself getting bored of anything that wasn’t reading the sadistic story that was going on around Mai’s circle of friends. In fact, I even resorted to merely using auto battle for, well, nearly all of the game due to the boredom of standard combat. Some specific bosses can automatically counter attacks that strike their elemental weakness but these tells are usually quite obvious and only a select few bosses take advantage of this mechanic.

Combat in Death end re;Quest 2 follows a very similar formula to the first game (as well as many other Compile Heart RPGs) with the open field of battle. Players can freely run around the battlefield to position themselves and take up to three actions in a turn between consuming items or attacking/spellcasting with certain ability combinations fusing together to unlock new skills. Every monster encountered is one of three main elements (Sun, Moon and Star) with a rock-paper-scissors approach to spell effectiveness against each. In the latter half of the game, enemies are severe HP sinks and if you aren’t actively exploiting their weakness or gathering up glitch bugs to power yourself up and enter a temporary OP state with powerful combo enders. How there are AI bugs like the first game when Le Choara takes place in the real world is another story but just go with it. 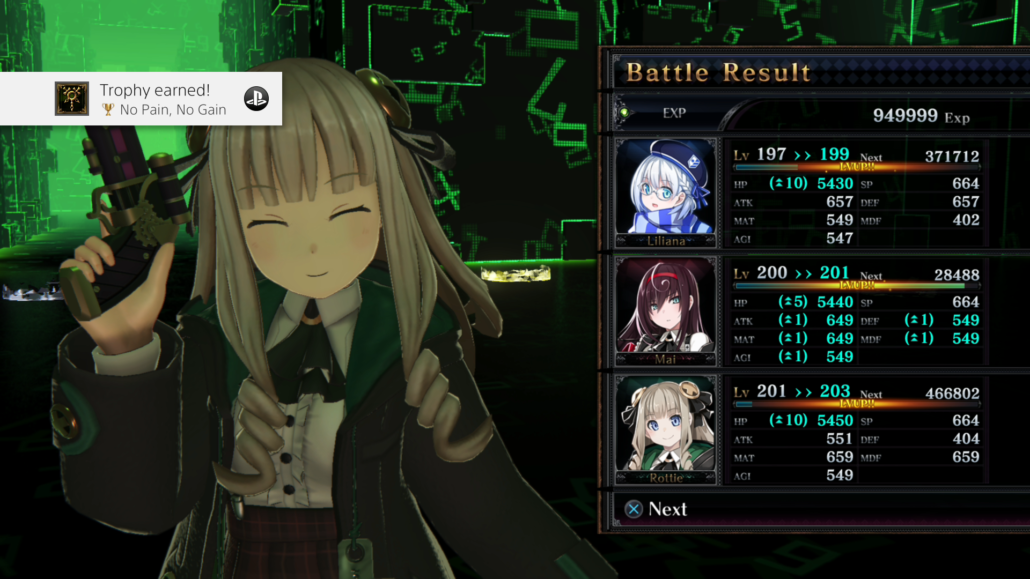 While Death end re;Quest 2 focuses on Mai and her two friends, there are more characters that can join your party later on. Presented in bulk, players can add in the main characters from the previous game to help fill your roster which helps for story moments when Liliana or Rottie leave the team for a chapter or two. Even when I had a full party, I almost never opted to use the bonus characters from the first game but it’s a nice addition to have as fan service from the first game.

Despite being a sequel, much of the story to Death end re;Quest 2 does operate as a standalone game. Shina and the other cast do make an appearance in the narrative but aside from Shina, most of these other characters only supplement the story at few integral parts without much overlapping between the two games. It’s only in new game plus when new story scenes are injected into the daytime events that more of the story is bridged between these two RPGs.

Death end re;Quest 2 is more visceral than the first game and still just as easy to play through, assuming you can stomach the written depictions of blood and gore. While the RPG aspects are fairly weak and the pacing drags on despite such a short runtime, it’s the writing that makes Death end re;Quest 2 worth playing.

[Editor’s Note: Death end re;Quest 2 was reviewed on the PlayStation 4 Pro. Review code was provided by the publisher.]

The sadistic events that surround the town of Le Choara are what makes Death end re;Quest 2 such a compelling read. While the combat is passable by IFI standards, it’s the quality of writing that makes this such a memorable title on its own.

Fallout 76 is Bringing Back the Brotherhood of Steel, Game is Free to…