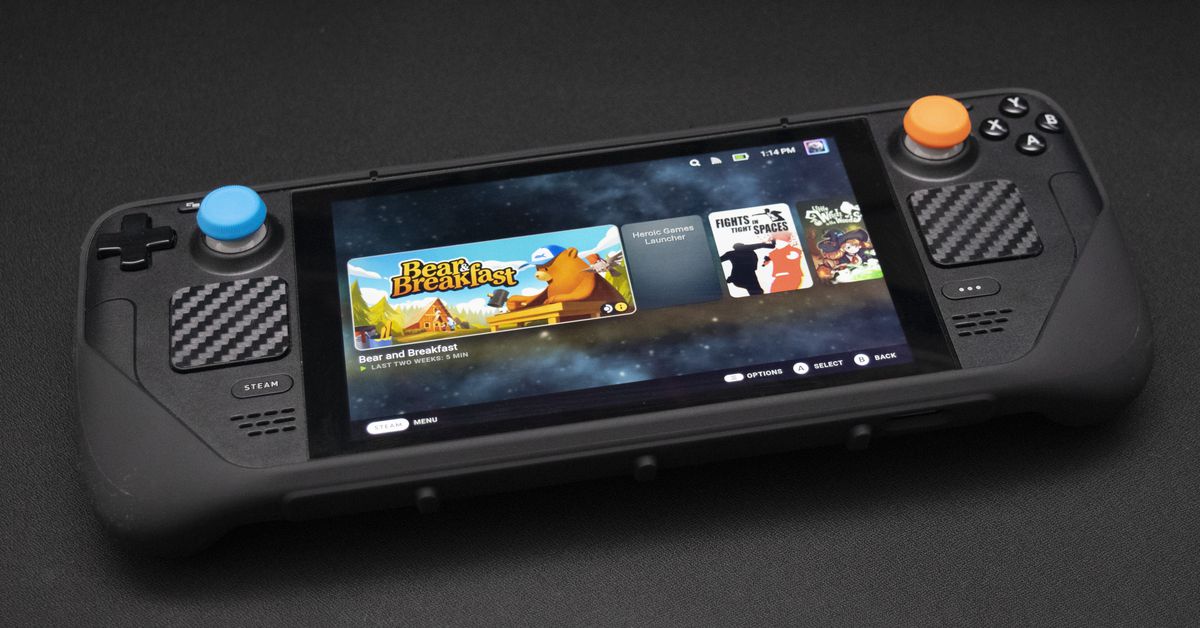 In high school, I’d keep my CD player from getting crushed in my bookbag by wrapping it in a wool sock. Considering that the CD player was probably the most expensive thing I owned at the time, I probably could’ve done better. This is how I felt with the first case I bought for my Steam Deck. It was definitely a step up from mismatched footwear, but I knew a device like this demands a little more respect without keeping it constantly locked away inside the case that it was packaged with.

Dbrand, maker of accessories for your phone, AirPods, and even your PS5, shares this sentiment and made “Project Killswitch.” Killswitch is designed to be a better protective skin for the Steam Deck and started development shortly following Valve’s announcement of the device.

The Killswitch case is a semi-flexible cover that fits snugly over your Steam Deck; the part of the case covering the handles has a nice, grippy finish to it that’s similar to Dbrand’s phone cases. The top and bottom of the case have raised edges to keep the buttons clear of any direct impacts (but the analog sticks are still exposed), while the back of the case has cutouts for the back paddle buttons and fan vents in addition to a raised area for the magnetic kickstand.

However, we wouldn’t recommend using the kickstand in its current state if you already have a Killswitch. The magnets used in the kickstand are incredibly strong, but their position can cause them to interfere with the fans used in certain earlier models of the Steam Deck. We tested this on the review model of our Steam Deck and had the fan speeds drop by 1500 to 2500 RPM with the kickstand installed. When we used this same method on a Steam Deck that was delivered back in July and another modded with an aftermarket fan, the impact was far less pronounced.

Here’s a video showing you the impact on our Steam Deck review unit:

Here’s a closer look at how the magnets can disrupt the fan:

Dbrand is aware of this problem and has issued a disclaimer alongside the public release of the Killswitch. Until Dbrand can manufacture a version of the kickstand that doesn’t use magnets you have a few options. If you’re someone that reserved a Killswitch during its development and ordered one back on the 25th, you can either return it for a full refund or hang onto it, and Dbrand will send you both a replacement case and kickstand (ones that do not feature magnets) as soon as they’re available. If you want to reserve an order now, you can currently order a kit off the Dbrand website with an estimated ship date of Q1 2023. Dbrand has also stated that any future production of the Killswitch will only be made with a mechanical kickstand and has issued a formal statement detailing the issue and the path forward on r/dbrand.

Moving on from magnets and fans, the other half of Project Killswitch is the travel case, a hardened piece of plastic that clips securely onto the face of the Steam Deck with the Killswitch case installed. The travel case has a beveled surface with a pair of larger feet protruding from either side. When it’s installed, the travel case doesn’t come into direct contact with the screen and protects the joysticks.

The essential Project Killswitch kit is be priced at $59.95 and includes the Killswitch case, the kickstand, and a Vinyl skin of your choice. The travel kit is also be available for $74.95, which includes all of the aforementioned loot but also throws in a pair of stick grips and the travel cover for the Killswitch.

It’s worth noting that every Steam Deck already comes with a case that’s honestly pretty damn good. But considering that your Steam Deck is likely spending most of its time out and about, having a little extra insurance allows you to feel a little less precious about your new handheld.

Protection aside, perhaps the most important aspect of the Killswitch is that, unlike some of the other Steam Deck cases I’ve tried, it doesn’t ruin the device aesthetically. Sure, all of those silicon sleeves might keep your Deck safe, but they feel terrible, look worse, and are an absolute magnet for hair and dust.

Cases, skins, and other protective accessories have been available for the Steam Deck since day one but are mostly what I’d consider a “better than nothing” solution. The Killswitch is something I’d actually want to dress my Steam Deck in. The issues surrounding the kickstand are a bit disappointing, but I’d still pay $59.99 for the fit and finish of the Killswitch case alone. Until something better comes along, the Killswitch case is my first and second recommendation for anyone that wants to get serious about protecting their Steam Deck. We would’ve liked to see a better product out of the box, but Dbrand is on the right track, and we’re looking forward to their next development.

Maverick’ Star Hits the Big Time by Joining the…