That day that a lot of people have been waiting for is near. After a few delays, much to the chagrin of many awaiting gamers, in just 20 days we’re going to see the launch of Cyberpunk 2077. For those getting ready for the launch of CD Projekt Red’s next release on the PC, the system requirements have been revealed over on Twitter and they’re not small.

CD Projekt has also listed RT requirements, for those of you who are looking to get some ray tracing on your Cyberpunk 2077. To say that you’re going to need a powerful rig for ultra settings with ray tracing is an understatement. I’ve got a spare kidney not being used, that may be getting sold to reach that ultra mark.

Cyberpunk 2077 Life Paths Influence the Game Past the Prologue; Melee Combat Is Viable, and Very Satisfying 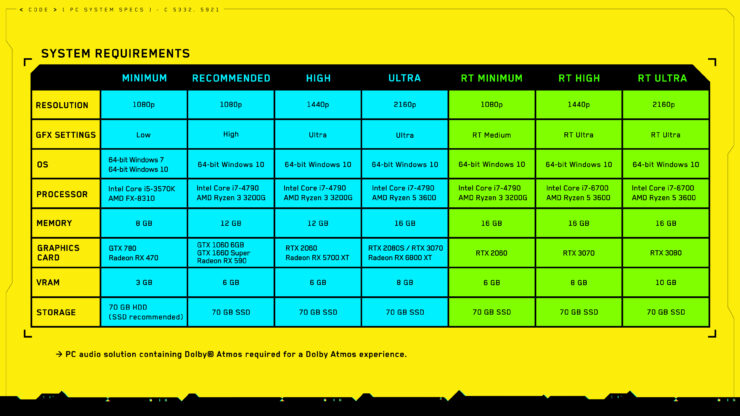 It’s no surprise that the requirements are so high for Cyberpunk 2077. We’ve seen a few videos already, both on the PC and on consoles. You can also see some ray tracing gameplay in a video that I’ll embed at the bottom of this piece. Needless to say, the amount of detail is huge and it would be hard to argue with the statement that this is the first game to truly show off what next-gen and ray tracing can provide.

Another interesting part for me is that this is probably the first game I’ve seen that has an SSD listed as essential for anything above minimum requirements, even recommending an SSD for the minimum requirements. Games are certainly heading in that direction, as we’ve heard from titles like The Medium and World of Warcraft: Shadowlands, but with how much is on show, and the amount of detail, it’s not a huge surprise.

I personally will be having to play the game on High settings. I have the RX 5700 XT in my rig, so there’ll be no ray tracing or ultra specs for me, not that I’m worried about that. How about you? Is your PC ready for Cyberpunk 2077 or will you be playing it on a console?

Persona 5 Strikers Lands In The West Next February