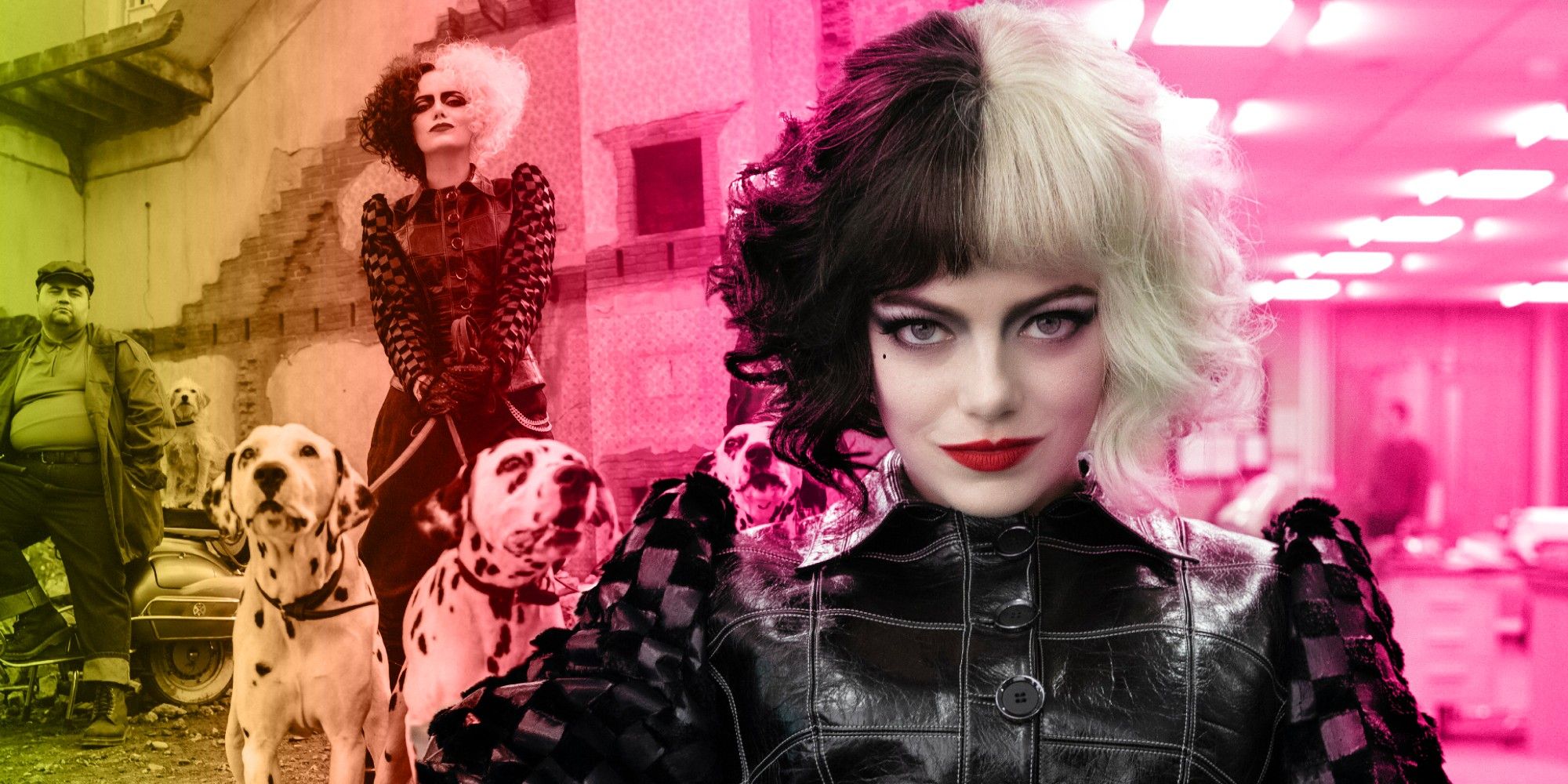 The hit movie Cruella features a wonderful soundtrack compiling a range of hit 1960s and ’70s British rock’n’roll, but the officially released soundtrack for the movie doesn’t include all the music that’s featured in the movie. Emma Stone as Cruella herself puts in an incredible performance, which is perfectly accompanied by the compelling blend of rock, R&B, pop, and punk music that underscored the character’s narrative and key plot points. While it may cause controversy that Disney has decided to turn all of its animated properties into live-action movies, this film certainly achieves a lot by the selection of music that soundtracks it.

Acting as a prequel to the classic animated 101 Dalmations, Cruella shows the childhood of Estella, a precocious girl who has a liking for dogs, and how she grows up to become the icon of the title. The movie finds its setting during the 1970s punk rock movement in London, and Cruella finds her footing in the city as an aspiring fashion designer who is at war with Britain’s upper class – and, in particular, with Emma Thompson’s Baroness von Hellman, an established designer who shares a history with Cruella’s family. As she comes to flex her artistic genius over the course of the movie, she embarks on a mission of revenge, challenging the establishment and the Baroness. The music backing Estella’s transformation is the ’70s punk that laid the foundation for heavy metal and grunge.

More than 30 sings released throughout the 1960s and ’70s feature in Cruella, and they range from classic funk to feminist power ballads. The soundtrack is able to create a strong sense of time and place, despite (or because of) its variety – centering around British beat music of the 1960s for which The Beatles are known. Also on the soundtrack are some of the British Invasion’s major hits from famous bands such as The Zombies, The Rolling Stones, and The Animals. It’s all inescapably English, and, more than that, inescapably the music of London plucked from the height of the British rock’n’roll movement – the perfect underscore for Estella Miller’s transformation into Cruella de Vil.

“Bloody Well Right,” by Supertramp (1974). Cruella opens with a classic anti-establishment hit plucked straight from 1970s London. The steady backbeat of Supertramp’s “Bloody Well Right” plays during a montage of Estella’s early years at primary school, a.k.a. elementary school. Estella, like many artists and musicians of the time, chafed against the strict British school system, instead embracing her wild nature. Estella’s rebellious attitude is reflected in the opening lyrics of the song, “So you think your schooling is phoney, I guess it’s hard not to agree. You say ‘It all depends on money and who is in your family tree.‘”

“Whisper Whisper,” by the Bee Gees (1969). The progressive rock song — picked from what is widely considered the best Bee Gees album of the 1960s — plays as Estella’s mother, Catherine, pulls her car up to a mansion where she hopes to get financial assistance.

“Inside-Looking Out,” by The Animals (1966). What better to kick off the first action scene of the movie than a bluesy rock hit from the early days of The Animals? “Inside Looking Out” has a relentless beat that kicks in as Estella starts wreaking havoc at the Baroness von Hellman’s ball, and keeps driving forward as the infamous Dalmations break free for a chase. Eric Burdon’s vocals slide easily from bass to soprano, creating a wild feel culminating in Catherine’s death.

Related: Every Live-Action Disney Remake, Ranked From Worst To Best

“Watch the Dog That Bring the Bone,” by Sandy Gaye (1969). Cruella starts getting funky when Estella moves to London, with Gaye’s soulful single creating a “nothing in life is free” vibe. The song accompanies a scene where Estella flees from the police and makes a lasting connection with fellow street urchins Jasper and Horace and, as an added bonus, fits the movie’s dog theme.

“She’s A Rainbow,” by The Rolling Stones (1967). Ten years later, a groovy, modern tune serves as the introduction to adult Estella, who is helping Jasper and Horace pull off complex cons by designing high-fashion disguises. Estella’s artistic genius, shown onscreen in a colorful burst of outfits, is also reflected in the song lyrics, “She comes in colors everywhere. She combs her hair. She’s like a rainbow.”

“Time of the Season,” by The Zombies (1968). Estella’s entry into the world of fashion through a renowned London department store is accompanied by this well-known psychedelic pop song … only to end in disappointment when the audience discovers she’s been hired as a janitor.

“These Boots Are Made for Walkin’,” by Nancy Sinatra (1965). Estella, who start exhibiting Cruella tendencies, sings along to this ultra-popular country hit as she decides to walk away from her job in a drunken fit of rebellion, destroying/redesigning the Liberty’s front window.

Related: When Cruella Is Available To Watch For Free On Disney+

“Five to One,” by The Doors (1968). Another R&B song bordering on hard rock accompanies the entrance of the Baroness, the best fashion designer in London, who hires Estella on the spot before her chaotic escape from the police.

“Feeling Good,” by Nina Simone (1965). The oft-covered jazz standard plays as Estella walks into the House of the Baroness, reflecting her visceral pleasure at making it big.

“Fire,” by the Ohio Players (1974). Cruella takes another turn toward funk right before Estella meets Artie, with the distinct sound again marking an important moment of transition in her life as she spots a red dress in the window of 2nd Time Around.

“The Wild One,” by Suzi Quatro (1974). Quatro’s feminist anthem is the first song in the movie to embrace the 1970s punk rock movement — when much of the movie is set — so it’s appropriate that it acts as an introduction for the villainous Cruella, who eventually becomes a punk icon in her own right. The song’s apropos lyrics, “You can’t hold me down. I’m the wild one,” play as Cruella makes her entrance at the Baroness’ ball.

“Livin’ Thing,” by the Electric Light Orchestra (1976). Orchestral string music gives way to soft rock in ELO’s hit single, matching the complete chaos that descends on the Baroness’ ball when Horace crashes into a cake and rats are let loose.

Related: All The Live-Action Disney Remakes In Development

“Stone Cold Crazy,” Queen (1974). The frenetic pace and lunatic lyrics of “Stone Cold Crazy” are an obvious match for Cruella’s state of mind as she speeds away from the Baroness’ party. Having discovered that the Baroness murdered her mother, Cruella is going slightly mad.

“Car Wash,” by Rose Royce (1976). The famous disco tune sets a steady beat for Japer, Horace and Cruella as they go to work, accompanying scenes of kidnapping dalmations and recruiting Artie.

“Boys Keep Swinging,” by David Bowie (1979). A close examination of London’s rock n’roll scene wouldn’t be complete without an homage to David Bowie, whose look seems to have inspired Artie’s costumes.

“One Way or Another,” by Blondie (1978). As is frequently the case in movies, this power punk-pop song turns ominous as it plays to a montage of Cruella embarking on a mission to destroy the Baroness and take over the fashion world.

Related: Why Glenn Close Is Credited On Cruella 2021

“I Get Ideas (When We Are Dancing),” by Tony Martin (1951). A romantic ballad turns literal when the Baroness gets ideas and steals Cruella’s dress design.

“Should I Stay or Should I Go,” by The Clash (1981). Cruella reaches peak punk when The Clash’s chart-topping single accompanies a scene where Stone’s character turns garbage into haute couture. The ironic statement is one of Cruella’s best publicity stunts and embodies the “stick it to the man” ethos of punk.

“I Love Paris,” by Georgia Gibbs (1953). An old-fashioned Cole Porter crooner brings some humor to the literal dirty work Jasper and Horace are doing as they swing a metal detector over dog poop.

“Love Is Like A Violin,” by Ken Dodd (1960). The lush “easy listening” music of 1940s makes a surprise appearance in Cruella as the Baroness takes credit for a dress designed and created by Estella. The scene creates some contrast between the two characters — where Estella is in love with fashion, the Baroness seems to be in love with power and status.

“I Wanna Be Your Dog,” by John McCrea. Cruella renews its focus on dogs with an original cover of The Stooges’ 1969 proto-punk hit. The garage band song plays during Cruella’s moment of victory — a flash mob fashion show in the park after she destroys the Baroness’ formal fashion event. This scene also marks the first appearance of Cruella’s famous Dalmatian coat (which she doesn’t actually make from puppy hides).

“Smile,” by Judy Garland (1963). Garland’s sweeping cover of Nat King Cole’s 1961 jazz classic provides a striking contrast to a scene where Cruella is near death. The song foreshadows John’s rescue of Cruella after the Baroness sets fire to her home and leaves her to die. At Cruella’s lowest point in the film, perhaps there are still seeds of hope?

“Gettin’ Out,” The J. Geils Band (1974). This toe-tapping rock song is the backdrop to Jasper and Horace’s jailbreak.

“Come Together,” by Ike & Tina Turner (1970). The Cruella soundtrack continues to pay homage to the history of British rock n’ roll with a cover of the lead-off track to The Beatles’ famed 1969 album, Abbey Road. The song plays as Cruella and her friends literally come back together, regrouping for their final attack on the Baroness.

Related: 2021 Now Has An Insane Amount Of Blockbuster Movies

“Cruella de Vil,” by Mel Leven (1961). In a post-credits scene, Disney pays tribute to the original 101 Dalmatians by having Roger (Kayvan Novak) sing a verse of “Cruella de Vil,” hinting at his future composition in the 1969 animated movie.

More: What To Expect From Cruella 2

Thor 2 Director Open To Making His Own Snyder Cut

Jasmine Gallup is a writer for ScreenRant, covering fantasy, science fiction and superheroes. She’s worked as a freelance reporter since 2018.

By day, Jasmine writes for a small North Carolina newspaper near her hometown of Cary. By night, she explores the depths of film and television alongside her twin sister.