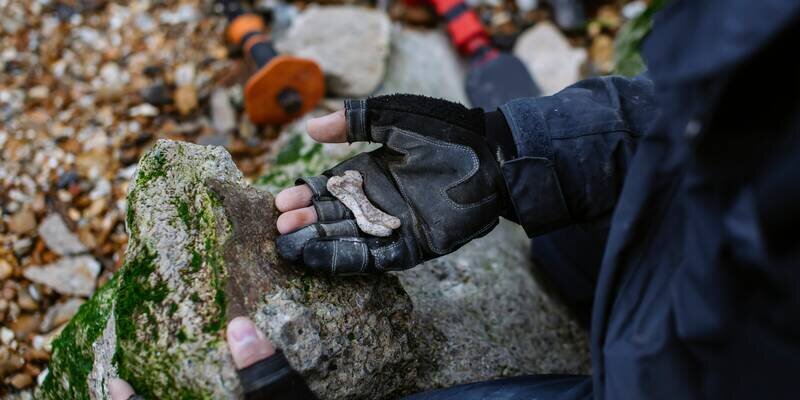 A group of students who headed to the beach last year for some fresh air amid the gloom of the pandemic, chanced upon a crocodile bone in the old seawall that led to the discovery of other fossils.

The University of Portsmouth students have since discovered five turtle bones, six crocodile teeth and some other unidentifiable bones over the past year.

They are convinced there are still more to be revealed.

Second year palaeontology student, Hamzah Imran, says that “my friends and I were at the beach when I noticed a rock with a thick black line. I’ve spent years fossil hunting and thought it must be a bone of some sort.

“We started hitting it with rocks at first—a rather Neanderthal attempt to free it, but then decided to return later that day with chisels and hammers. After four hours, we managed to break out the bone, but it was actually the rest of the rock that made us scream with excitement—there was a crocodile leg bone at the other end.”

The students’ finds almost certainly came from Dorset, but crocodiles likely lived along the entire southern coast of Britain 140 million years ago in swamps and lagoons.

The group of friends sought permission from the council to break out other fossils and have since found numerous other specimens.

“One of our best finds was the shoulder blade and shell of a turtle as well as other turtle limbs.”

The fossils were found on Southsea beach opposite the Portsmouth Naval Memorial between Clarence Pier and Southsea Castle, where new sea defenses are being installed.

Hamzah approached his Professor, David Martill, from the School of the Environment, Geography and Geosciences, to help verify some of the finds.

Professor Martill says that he thinks “the old seawall building blocks that are being uprooted have come from the Isle of Purbeck, Dorset, which means the fossils would be from around 145 million years ago.”

“These limestone rocks were probably exposed in Durlston Bay, a fossil-rich bay on the Isle of Purbeck Dorset, and then used for the original seawall. These rocks make excellent walling and kern stones and were used widely for our streets and sea defenses. That is how these crocodiles came to be in Portsmouth.

“The crocodiles back then will have been more dominant on land than in the ocean, so they would have been roaming around with dinosaurs, turtles and pterosaurs in an ecosystem sprawling with swamps and lagoons.”

Provided by
University of Portsmouth

Here’s everything shown in the December 2021 Indie World Showcase

The Simpsons’ latest couch gag is an homage…