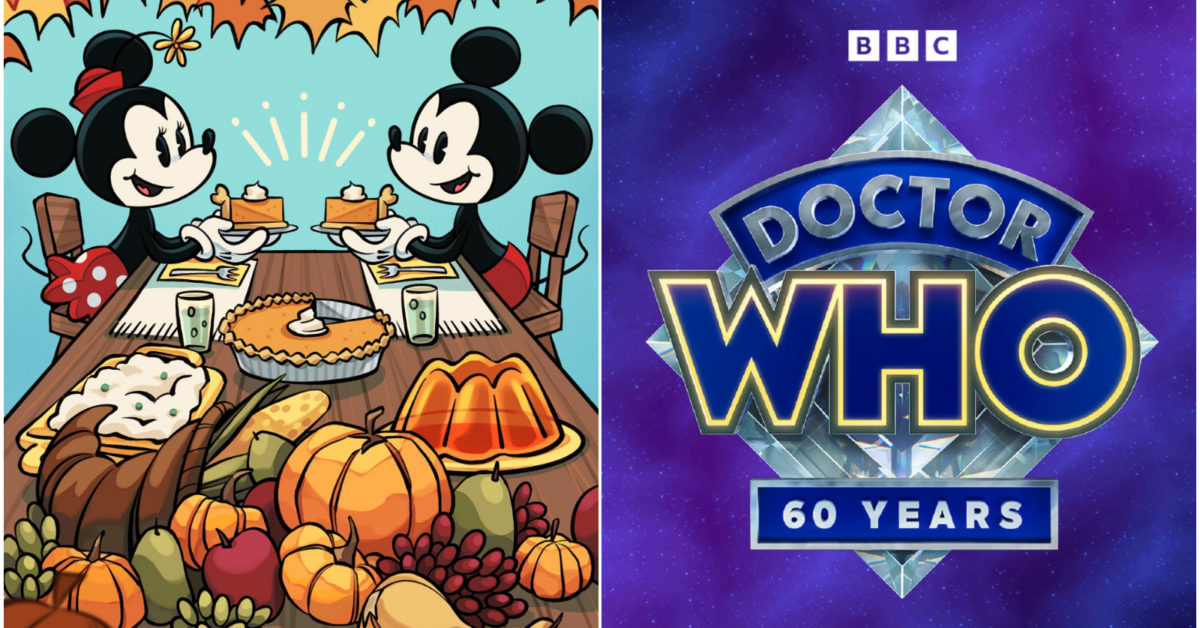 When November 2023 rolls around, fans of BBC’s Doctor Who will be celebrating the long-running series’ 60th anniversary in grand fashion. Returning/new showrunner Russell T. Davies is offering us the returns of David Tennant (our Fourteenth Doctor, also) & Catherine Tate (Donna Noble) and on-screen introductions to new Doctor Ncuti Gatwa (our Fifteenth Doctor) and Millie Gibson (new companion Ruby Sunday) in a three-episode event also mean to serve as a bridge to the new series. And that’s where things get a little complicated… possible. Because after looking at our calendars, we’ve realized something that a lot of other folks are realizing, too. To honor the 60th anniversary, the first episode would have to air on Thursday, November 23, 2023- which also happens to be Thanksgiving in the United States. You might think that’s not a big problem because, in the past, the episode/special would air in the UK at its normal time (usually 7 pm ET) and would either air at the same time, around 2 pm ET (with a re-airing later in the day). But those were the BBC America Days… and Disney is no BBC America.

At the end of October, we learned that “The Mouse” would be the exclusive home to “new Who” outside of the U.K. & Ireland beginning in November 2023. And since that time, there have been rumblings that Disney would also be an active investor in the series and may have some overall say in how the series operates. If that’s the case, then Disney will be looking to maximize its investment as much as possible. With that in mind, having the 60th anniversary run in the U.S. in the middle of Thanksgiving day is a helluva challenge considering more and more streamers are looking to flex their muscles when it comes to live-streaming numbers. The special would be competing with Macy’s Thanksgiving Day Parade, dog shows, football, family dinners, and a whole bunch of other obstacles. Sure, Disney could market the living hell out of it for months leading into it because no one does PR like “The Mouse.” But still, those obstacles remain.

Could the time the show airs be adjusted? Sure, if Disney wants to be painted as the “big bad” by a bunch of Brits with their torches & pitchforks looking to trap “The Mouse” in the town square. I can see already just how ugly social media would get, creating a “David & Goliath” public relations nightmare that Disney doesn’t really need right now. Of course, if “The Mouse” is playing the long game when it comes to Doctor Who in that they’re more concerned with the streaming figures “blank” amount of days out, then there isn’t an issue & it should be full-steam ahead. But still, something for us to keep rumbling in the backs of our brains.