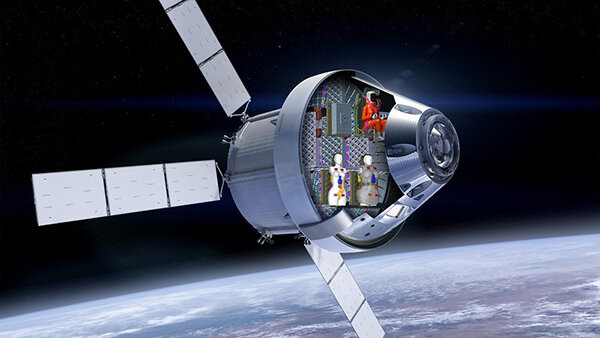 Although bad weather and technical issues forced NASA to postpone its August and September launch attempts for Artemis I—an uncrewed space mission that will voyage around the moon and back—the space agency is looking towards a launch window in the second half of November 2022, possibly November 16. The highly anticipated space flight will be the first to test the new Orion spacecraft along with its rocket and ground systems.

The Artemis I mission is the first step in NASA’s plans to carry human crews to further explore the lunar surface and eventually establish a sustainable outpost on the moon. The flight would also contribute to the groundwork required for a mission to Mars. When it blasts off from the Kennedy Space Center in Florida, Artemis I will carry two mannequins strapped into its crew module. The mannequins are part of a project aided by a team of Duke University bioengineers with support from the National Institute of Biomedical Imaging and Bioengineering (NIBIB).

Among the challenges facing human space exploration is the health risk posed by cosmic radiation. The mannequins, physical phantoms, were manufactured by a commercial supplier and designed originally for use in medical imaging testing or radiologic practice. For the space mission, each phantom will be outfitted with sensors to measure the accumulated radiation in various parts of the body that astronauts would absorb during such a space flight.

“Diverse anthropomorphic phantoms have been critical tools used to evaluate and fine tune medical scans from X-ray to CT. These phantoms are particularly important as they represent human anatomy and thus the impact of imaging in a most relevant way,” said Behrouz Shabestari, Ph.D., NIBIB Director of the National Technology Centers Program and Acting Director of the Division of Health Informatics Technologies.

“The team at Duke University has honed their expertise in computational modeling and studying human tolerance of radiation dosage from medical imaging and now has further purposed this expertise towards analysis and study for the space program.”

Each phantom is a representation of the female anatomy. Researchers conducted some radiation exposure experiments with a male phantom previously aboard the International Space Station. Each phantom is embedded with over a thousand radiation sensors that will collect readings for precise organ locations, according to Duke University’s Center for Virtual Imaging Trials (CVIT) Director Ehsan Samei, Ph.D., Duke University Reed and Martha Rice Distinguished Professor of Radiology, Medical Physics, Biomedical Engineering, Physics, and Electrical and Computer Engineering. CVIT researchers have developed computation models of virtual humans for the past 19 years for medical imaging research.

The models are realistic, dynamic, and diverse including detailed anatomies from a host of different subjects—pediatric and adult, pregnant and non-pregnant. They also include cardiac and respiratory motions and can simulate any number of diseases. “With enough realism, you can do medical experiments to figure out whether an intervention is effectual or not by trying it on a computational model,” Samei said. He added that this experiment uses female phantoms because the female anatomy is more sensitive to radiation exposure than the male anatomy and exposure estimates for male astronaut radiation exposure can draw from female phantom data.

In addition to NASA, collaborators on the project include engineers at the German Aerospace Center, the Israeli Space Agency, and CIRS. During the test flight, the researchers have outfitted the phantom called Zohar with a vest that will be evaluated by for its ability to protect the body from absorbing radiation. The other phantom, Helga, will not be surrounded by a protective shield.

“When we are exposed to radiation, the damage is deposited directly into the organs—and different organs have different levels of radiosensitivity,” Samei said. “For example, breast tissue tends to be more radiosensitive, while muscles are not as radiosensitive. The brain is less radiosensitive than the heart. That’s why it is essential for the study to keep track of radiation and where in the body it is deposited.”

Helga and Zohar are manufactured specifically to include only definitions for the lungs and bones within the body. The team at Duke created an interior map to define everything else. They used the virtual models developed as part of CVIT to figure out where all the organs are, according to Paul Segars, Ph.D., Associate Professor of Radiology and Deputy Director of CVIT.

“We have a computational GPS map that tells where every sensor is installed,” Segars said. “Our virtual definition of the organs provides the GPS, telling it the number of sensors to measure to make up the heart dose or to get the pancreas dose.”

NASA will use radiation dosage information to better understand the risks posed to astronauts and for the design of possible protective measures for space flight or long durations spent on the moon.

Radiation exposure is a hazard to be contended with on long space missions. A Mars mission would take about 36 months round trip, according to Samei. “That we have this much load going around the moon tells you what an important issue radiation exposure is,” Samei said. The Zohar and Helga phantoms weigh about as much as human astronauts. “NASA will receive the most definitive assessment of radiation dose to astronauts that we can ever get and could never be obtained from real astronauts.”

Duke University’s CVIT lab is one among a network of NIBIB-supported National Centers for Biomedical Imaging and Bioengineering. The Centers create critical and unique technology and methods that can be applied to a range of basic, translational, and clinical research. The team at CVIT has been working with virtual phantoms for two decades and more recently has focused on the design of anatomical maps for use in the phantom models.

Provided by
National Institutes of Health

Zack Snyder Dashes Hopes of the SnyderVerse Being Imminently Restored