Communities of color at greatest risk of pesticide exposure in Ventura County, California 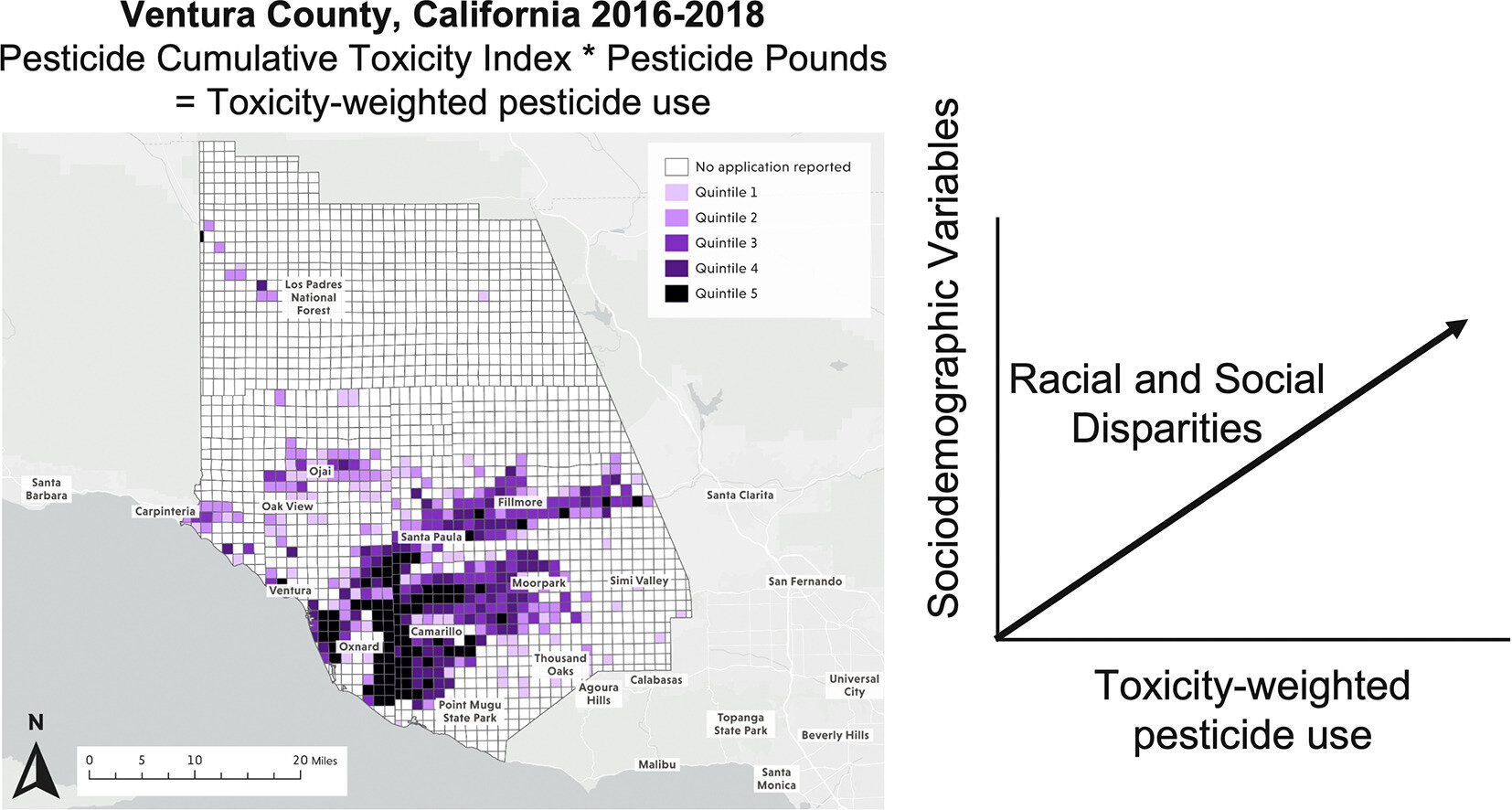 In California’s Ventura County, increased agricultural pesticide use and related toxicity risks for humans occur the most in areas with more people of color and limited resources, according to a new study by Environmental Working Group scientists.

The paper, on racial and social disparities in the county based on agricultural pesticide applications, was just published in the journal Science of the Total Environment.

“This peer-reviewed study is further evidence that communities of color are shouldering the biggest burden of pesticide exposure,” said Alexis Temkin, Ph.D., an EWG toxicologist and co-author of the paper.

EWG’s scientists set out to identify, based on race and ethnicity and indicators of social vulnerability, disparities in potential pesticide exposure among communities. They analyzed more than 340,000 pesticide application records collected by the state of California for Ventura between 2016 and 2018, then layered this on U.S. Census Bureau sociodemographic data.

More than 5 million pounds of pesticides are applied on Ventura farms each year, according to EWG’s analysis of California pesticide data. These pesticide exposures, documented in the EWG mapping tool, threaten the health of hundreds of thousands of people who live in the county and put farmworkers and their families at the greatest health risk.

The data show greater pesticide application in communities with a higher percentage of people who identify as Latino, Black and Asian American. The areas in the county where very little or no pesticides are applied are largely inhabited by non-Hispanic white residents.

“This is another stark example of unjust policies and practices rooted in environmental racism,” said Uloma Uche, Ph.D., environmental health science fellow at EWG, who conducted sociodemographic analysis for the study.

EWG’s researchers developed and used a pesticide ranking methodology based on toxicity, and the amounts applied to farm fields, to highlight geographic areas of greatest concern and identify pesticides associated with the greatest potential threat to health.

Many of the pesticides widely used in Ventura are associated with serious health problems, including neurological and behavioral problems in children, endocrine disruption and cancer, among others. Of the 290 pesticides used with available toxicity information, 113 were associated with multiple health issues.

Most of the locations with high-risk pesticide use are located near Oxnard, the biggest city in Ventura County. Oxnard has a higher percentage of people who identify, in census records, as Hispanic or Latino or non-Hispanic African Americans, compared to the county’s other communities. This echoes other reports showing people of color are more likely to live close to areas of high environmental pollution and inadequate environmental health protection.

“We have to stop applying pesticides that can increase the risk of cancer and other serious health problems that are associated with these chemicals,” said Paul Burke, chair of the Environmental and Climate Justice Committee of the Ventura County branch of the NAACP. “We need to require farms to use fewer toxic pesticides, and more natural pest prevention solutions. Too many families are losing their loved ones to cancer.”

These health risks are greatest for farmworkers and their families, who experience the highest exposures to pesticides in the county. Epidemiological studies conducted in California found that living near pesticide spraying is linked to increased risk of cancer and harm to the respiratory system and the developing fetus, such as low birth weight and reduced IQ.

The EWG study’s findings are similar to those in an earlier analysis by the state of California under its CalEnviroScreen program, which reported social and environmental injustice and inequities in exposure to toxic chemicals, including pesticides.

“Exposures to toxic chemicals and disparities in the health care system continue harming Black and Brown communities. Like Flint, Mich., and Jackson, Miss., people in Ventura face severe environmental injustices. Pesticide pollution in the air we breathe is like a silent killer,” Hatcher-Crawford added.

More than one in four homes in Ventura is located a half-mile or less from fields sprayed with pesticides linked to serious health harms, including cancer, neurotoxicity and harm to development and reproduction. And 33 elementary schools in the county are within a quarter-mile of pesticide applications, as shown in the EWG mapping tool.

“As a long-time former farmworker and now community organizer educating the public on pesticide issues, I am very concerned about how little public understanding there is regarding the health risks of pesticide use, and the lack of awareness people have of what is being sprayed around them,” said Teresa Gomez, coordinator of CAPS 805, Coalition Advocating for Pesticide Safety, part of the statewide Californians for Pesticide Reform coalition.

“That’s why we are campaigning for the right to know about pesticide applications in advance, and why mapping pesticide use data is so important,” Gomez said.

A 2014 analysis of pesticide use near schools in California found Hispanic children were far more likely than non-Hispanic white children to attend schools near the heaviest pesticide use.

There are no state or federal limits on the number of agricultural pesticides allowed in air, so any amount of a single pesticide or pesticide mixture in air, over any period, is legal. Although the California Department of Pesticide Regulation performs seasonal air monitoring for pesticides in certain high-use areas, the frequency of monitoring and number of monitoring locations do not fully capture the heavy agricultural use in Ventura or the state.

“Mapping pesticide use data is an important tool in our shared work toward a California food and farming system free of the dangerous pesticides. This is the kind of information residents and workers need in their own hands to advocate for the protection of their families and communities,” said Pesticide Action Network Senior Scientist Margaret Reeves.

Examining the pesticides that may increase cancer risk in children

Viola Davis Reveals The Initial Fears She Had…