Climate simulation reveals precipitation isotope changes in Asian monsoon and arid regions for the past 300,000 years 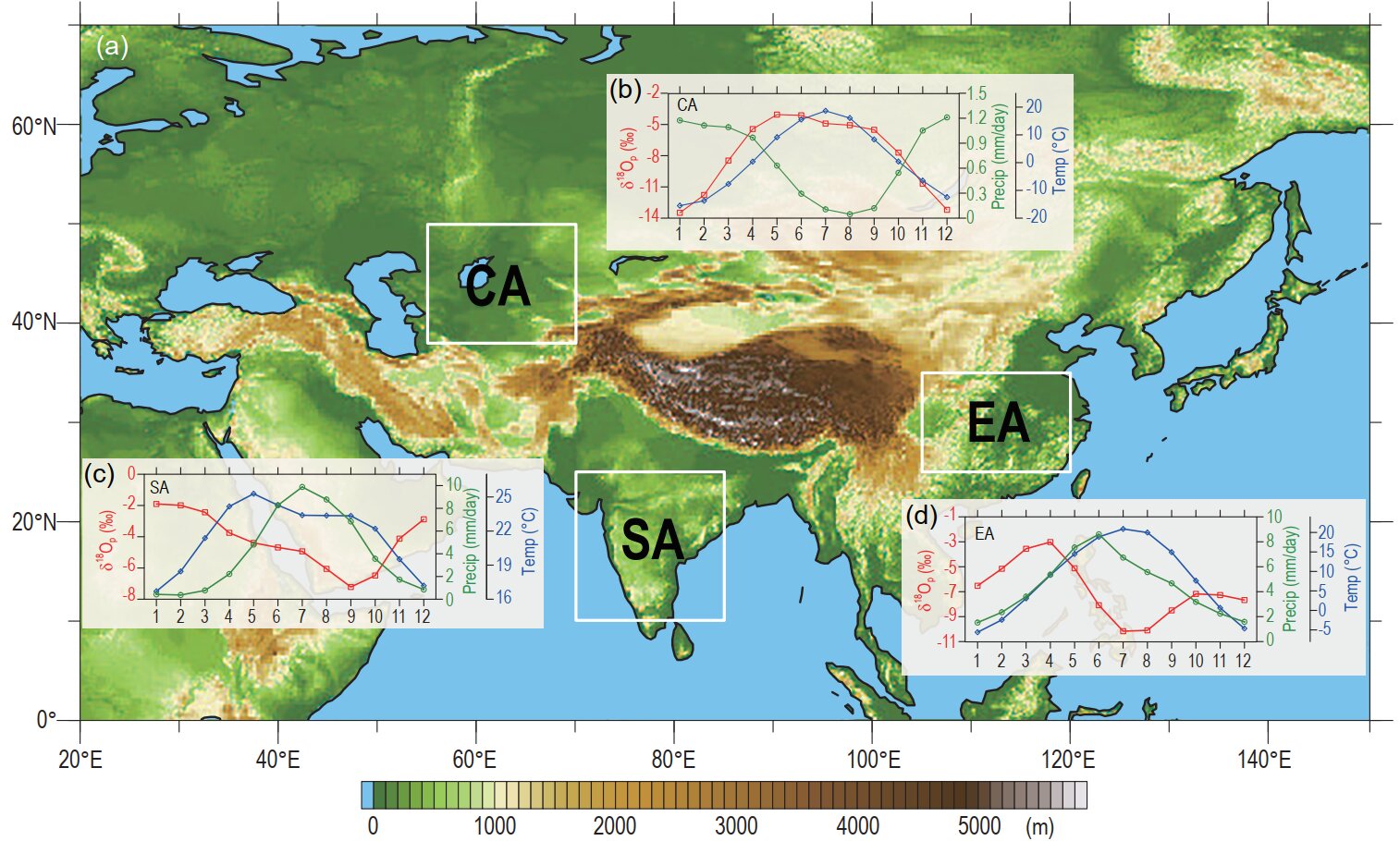 Stable isotopes in precipitation are important indicators for studying changes in the Earth’s water cycle and reconstructing the paleoclimate history. Previous studies have shown that the precipitation stable isotopes in Asia recorded in stalagmites and other sediments have prominent periodic change patterns on the 10,000-year scale (orbital scale) in geological periods, but in the scientific community there are still controversies about the climatological significance indicated by the precipitation isotope changes in different parts of Asia.

In an article entitled “Model-based distinct characteristics and mechanisms of orbital-scale precipitation δ18O variations in Asian monsoon and arid regions during late Quaternary” which was just published in National Science Review, scientists from China and the U.S. revealed distinctly different variation characteristics and their controlling factors of precipitation oxygen stable isotope ratio (δ18Op) at the orbital scale in the arid Central Asia (CA), monsoonal South Asia (SA) and East Asia (EA). This study provides new insights for understanding the regional differences and formation mechanisms of long-term changes of precipitation isotopes in Asia.

In this study, a transient simulation covering the past 300,000 years was carried out with an isotope-enabled climate model, under time-varying climate forcing conditions including astronomical insolation, atmospheric greenhouse gases and global ice sheets.

The precession-induced insolation changes in different months are the fundamental reason for the periodic and asynchronous variations of annual precipitation isotopes in the CA, SA and EA regions, but the physical processes involved are different. For the CA region where annual precipitation is dominated by the winter (rainy season) rainfall and snowfall, the rainy-season temperature effect and water vapor transport by the westerly circulation are identified as the key precession-scale processes linking the October-February boreal mid-latitude insolation to the rainy-season or annual δ18Op.

In the SA region where annual precipitation is dominated by the summer monsoon, the rainy-season precipitation amount effect and upstream depletion of the monsoonal water vapor isotope serve as the main mechanisms linking the rainy-season or annual δ18Op to the April-July insolation variationat the precession scale. For the EA region, however, the precession-scale annual δ18Op is mainly controlled by the late-monsoon (August-September) and pre-monsoon (April-May) water vapor transport patterns, which are driven by the July-August insolation and the global ice volume, respectively.

“Our results suggest that the climatic implications of the orbital-scale Asian δ18Op variations are sensitive to their geographic locations, because they are determined by the combined effects of the precession-induced changes in the local climate elements and regional circulation patterns,” says Dr. Xiaodong Liu, the lead author from the Institute of Earth Environment, Chinese Academy of Sciences.