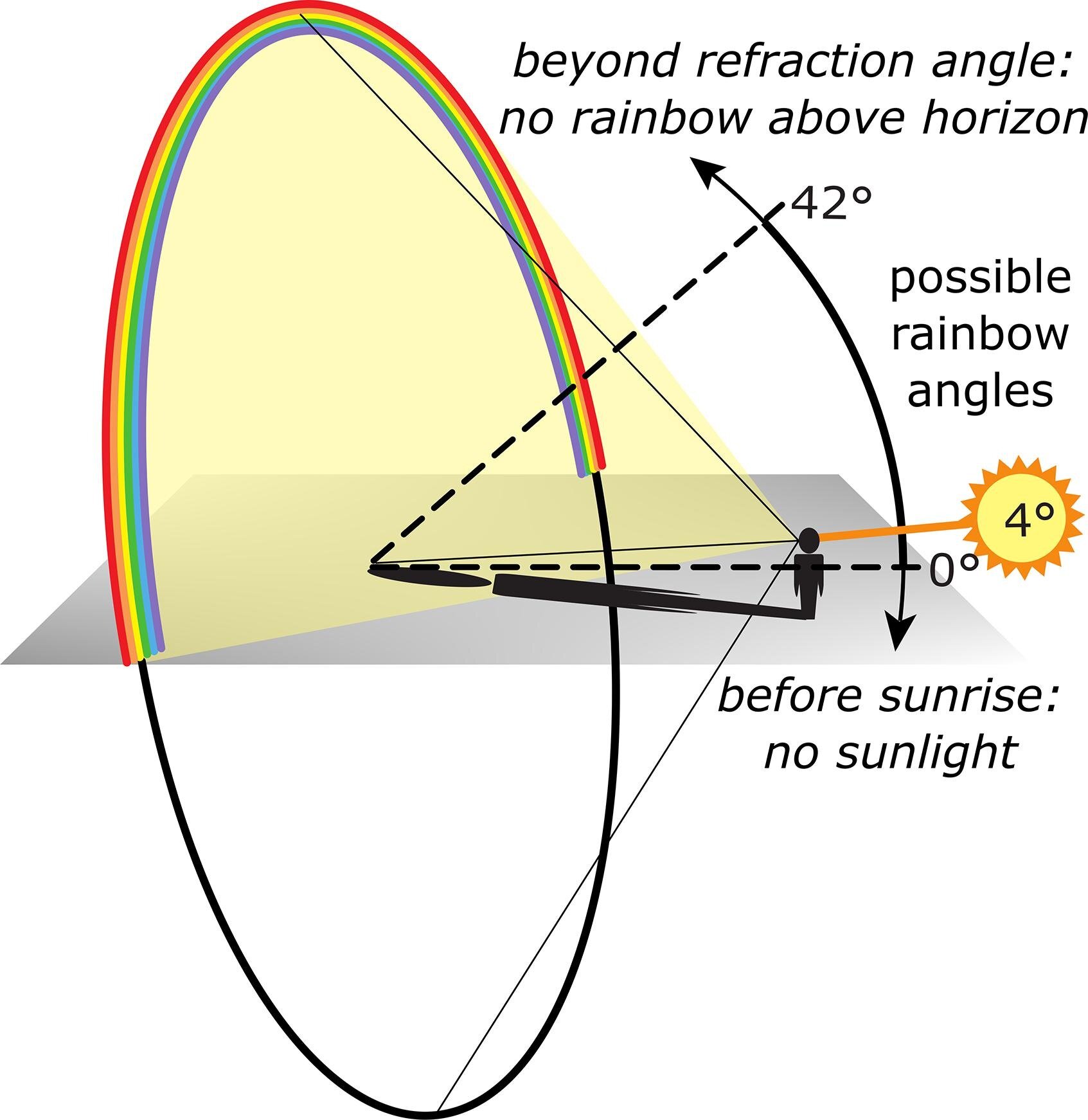 Climate change will increase opportunities to see rainbows, according to a new study led by researchers at the University of Hawai’i (UH) at Mānoa. The study’s authors estimate that by 2100, the average land location on Earth will experience about 5% more days with rainbows than at the beginning of the 21st century.

Northern latitudes and very high elevations, where warming is predicted to lead to less snow and more rain, will experience the greatest gains in rainbow occurrence. However, places with reduced rainfall under climate change—such as the Mediterranean—are projected to lose rainbow days.

Rainbows are produced when water droplets refract sunlight. Sunlight and rainfall are therefore essential ingredients for rainbows. Human activities such as burning fossil fuels are warming the atmosphere, which changes patterns and amounts of rainfall and cloud cover.

“Living in Hawai’i, I felt grateful that stunning, ephemeral rainbows were a part of my daily life,” said the lead author of the study, Kimberly Carlson, who is now at New York University’s Department of Environmental Studies. “I wondered how climate change might affect such rainbow viewing opportunities.”

Camilo Mora, at the UH Mānoa Geography and Environment department, was intrigued by the question and pitched it as the focus of a project for one of his graduate courses.

According to Mora, “We often study how climate change directly affects people’s health and livelihoods, for instance via the occurrence of heat stroke during climate change-enhanced heat waves.”

However, few researchers have examined how climate change might affect the aesthetic qualities of our environment, and no one had bothered to map rainbow occurrences, much less under climate change.

To answer this question, a team including students at UH Mānoa looked at photographs uploaded to Flickr, a social media platform where people share photographs. They sorted through tens of thousands of photos taken around the world, labeled with the word “rainbow,” to identify rainbows generated from the refraction of light by rain droplets.

Amanda Wong, then an undergraduate student in Global Environmental Science in the UH Mānoa School of Ocean and Earth Science and Technology (SOEST) and a co-author on the paper, noted, “We had to sort through photos of rainbow artwork, rainbow flags, rainbow trout, rainbow eucalyptus, and rainbow foods to find the real rainbows.”

Then, the scientists trained a rainbow prediction model based on rainbow photo locations and maps of precipitation, cloud cover, and sun angle. Finally, they applied their model to predict present day and future rainbow occurrences over global land areas. The model suggests that islands are rainbow hotspots.

“Islands are the best places to view rainbows,” according to Steven Businger, professor of Atmospheric Sciences in SOEST. “This is because island terrain lifts the air during daily sea breezes, producing localized showers surrounded by clear skies that let the sun in to produce majestic rainbows.”

The Hawaiian Islands, recently dubbed the “rainbow capital of the world”, are predicted to experience a few more days with rainbows per year. The authors stopped short of discussing how changes in rainbow occurrence might affect human well-being. However, rainbows are an important part of human culture throughout history and around the world and are esthetically pleasing.

“Climate change will generate pervasive changes across all aspects of the human experience on Earth. Shifts in intangible parts of our environment—such as sound and light—are part of these changes and deserve more attention from researchers,” said Carlson.

In this case, the overall findings are encouraging—it seems people will have more opportunities to make a rainbow connection under climate change.

The research was published in Global Environmental Change.

Provided by
University of Hawaii at Manoa

Why Lindsay Lohan Feels ‘Jealous’ Of Stars Coming Up Now