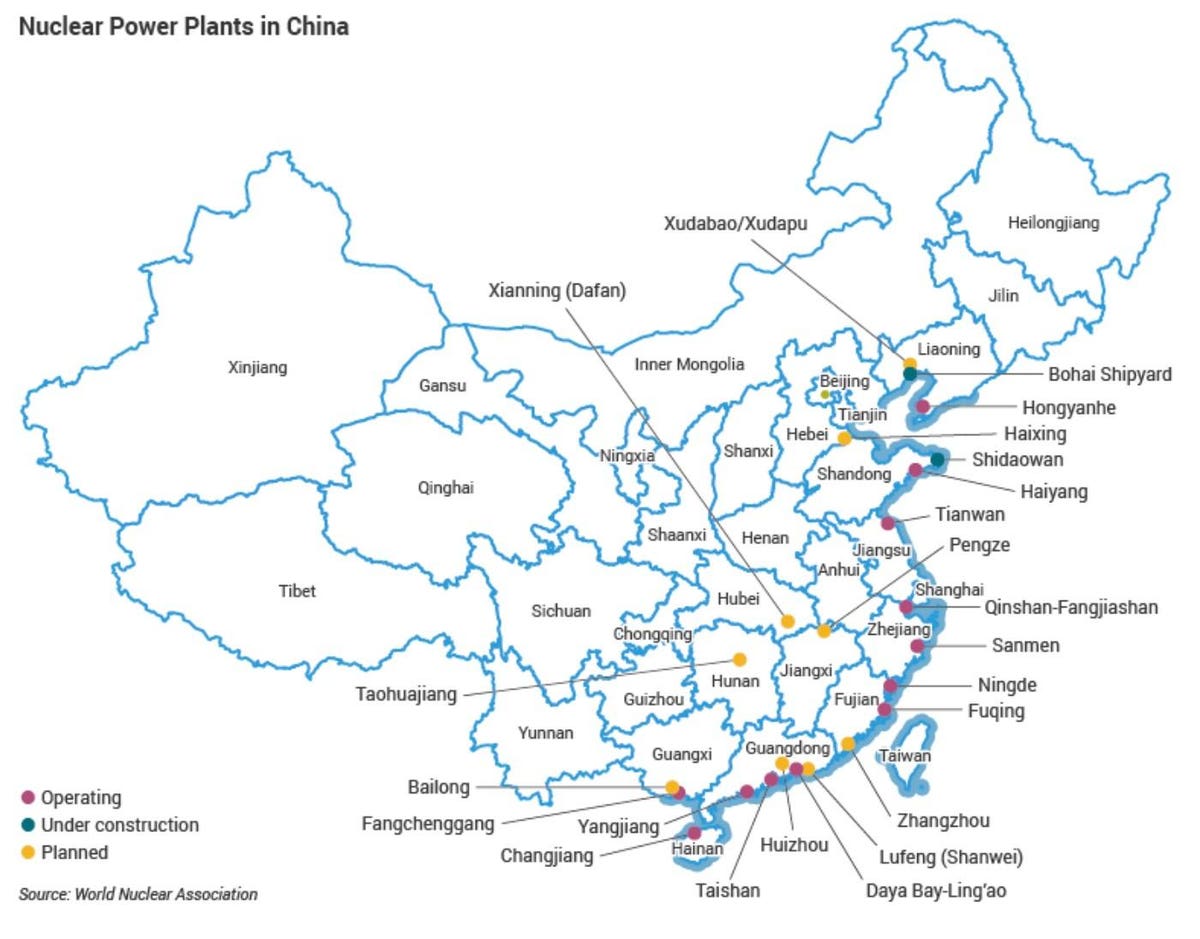 The China National Nuclear Corporation has started building its first small modular reactor (SMR) on the island province of Hainan, at its Changjiang nuclear power plant (at bottom of map).

It will be China’s own Linglong One design, it will be about 125 MW, it will take about 5 years to build, and it will generate about a billion kWh/year.

China has correctly decided to diversify its nuclear sector as a way to attain real energy security and to achieve any reasonable level of decarbonization.

China now leads the world in total energy production and also produces almost twice the amount of electricity that the United States does, 4.4 trillion kWh versus 7.5 trillion kWh per year, respectively.

With over a third of China’s population still being energy poor or in abject poverty, their energy use will only increase over the next 30 years, probably exceeding 10 trillion kWh/year.

And they intend for a lot of that to come from nuclear.

China has 49 nuclear reactors in operation with a capacity of 47.5 GW, third only to the United States and France. And 17 under construction with a capacity of 18.5 GW. 100 more with an anticipated capacity of over 100 GW, are planned by 2035. This will be close to half the world’s nuclear capacity. And they won’t stop there. They should double that again by 2060.

In keeping with its ambitious goal to lead the world in nuclear, China has also established the first national institute dedicated to nuclear research, training and academic exchange. China National Nuclear Corporation recently signed an agreement with Tsinghua University to establish the Nuclear Research Institute.

This is a pretty serious nod to the importance of nuclear in China’s future.

The country’s first demonstration SMR at the Changjiang nuclear facility in Hainan will be used to “verify the design, manufacture, construction and operation of the technology and accumulate valuable experience in small nuclear power plants,” CNNC said in a notice.

China sees the Linglong One as being specific to special situations and as supporting its bigger third-generation Hualong One reactor as it exports its advanced nuclear technologies overseas and along its Belt And Road geography.

SMRs are a third to a tenth the size of conventional reactors and are especially good for remote areas, supporting wind farms and solar arrays, offshore and island applications, supporting industrial processing and steam generation, and for urban heating and desalination projects.

What is frustrating is that China is acting like the United States did in the 20th century, outstripping the rest of the world technologically and setting themselves up to lead the world in the second half of this century.

While we’re back in the weeds just trying to convince people to get vaccinated and pretending that elections are stolen.

Denial of responsibility! TechCodex is an automatic aggregator of the all world’s media. In each content, the hyperlink to the primary source is specified. All trademarks belong to their rightful owners, all materials to their authors. If you are the owner of the content and do not want us to publish your materials, please contact us by email – [email protected]. The content will be deleted within 24 hours.
bill gatesChinaClimate ChangeHualong OneLinglong Onenuclearsmall modular reactorsSMR
0
Share

Double your data with these brilliant iPhone 12, 12 mini and iPhone 11 deals

Evil Dead: The Game – Five Tips on Getting…

A century ago, Alexander Friedmann envisioned the…

Ubisoft Kicks Off Its Best Sale Of The Year