Changes in the tree canopy facilitated the evolution of the first-ever gliding reptile, new study suggests 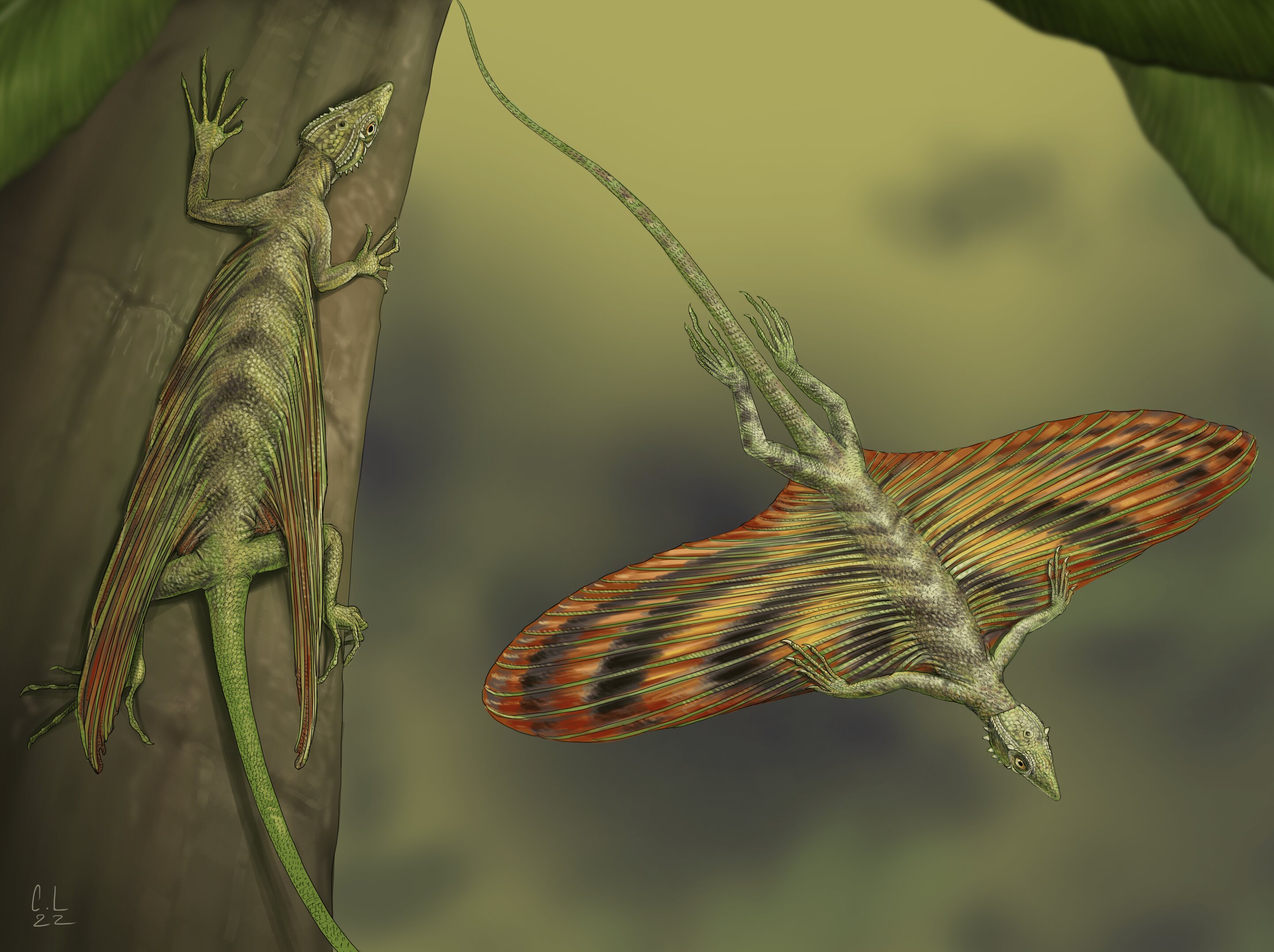 Researchers have run through near-perfect fossils of the world’s first gliding reptile with a fine-toothed comb, and have untangled previously unknown facets to discover it was a change in tree canopy that likely facilitated such flight in these creatures.

Since the first fossils of Coelurosauravus elivensis were discovered in 1907, there has been spirited debate over how the animal actually lived during the Late Permian Period—between 260 million to 252 million years ago—and how its unique body parts fit together.

By piecing together enough fossils to create a near-perfect skeletal reconstruction, new research provides fresh insights into the tetrapod’s morphology and its habits; and crucially establishes how it became the first-known reptile to glide.

The answer to the latter derives from the canopy of the forestry in which this unusual creature lived, suggest experts from the French National Museum of Natural History, in Paris (or Muséum National d’Histoire Naturelle) and the Staatliches Museum für Naturkunde Karlsruhe, in Germany.

Explaining their findings today, in the Journal of Vertebrate Paleontology, lead author Valentin Buffa, from the Centre de Recherche en Paléontologie—Paris at the French Natural History Museum, states, “Pennsylvanian forests, while taxonomically and vertically heterogeneous, had rather open canopy strata with spatially separated arborescent taxa resulting in little crown overlap. In contrast, Cisularian forests show evidence of denser communities suggestive of more continuous canopy strata. Such change in forest structure could explain why no gliders have been reported prior to weigeltisaurids, although several arboreal or scansorial amniotes have been described from Pennsylvanian and Cisularian deposits.

“These dragons weren’t forged in mythological fire—they simply needed to get from place to place. As it turned out, gliding was the most efficient mode of transport, and here in this new study, we see how their morphology enabled this.”

The team examined three known fossils of C. elivensis, as well as a number of related specimens, all belonging to the family Weigeltisauridae. Their research focused on the postcranial portion—the body, including the torso, limbs, and remarkable gliding apparatus, known as the patagium. The latter is the membranous flap spanning the forelimbs and hindlimbs, also found in such living animals as flying squirrels, sugar gliders, and colugos.

Previous analysis of the reptile had assumed that its patagium was supported by bones that extended from the ribs, as they do in modern Draco species of Southeast Asia—which to this day amazes observers with its gliding flights between the rainforest trees it inhabits.

However, this thorough new examination suggests that the patagium of C. elivensis either extended from the gastralia—an arrangement of bones in the skin that covers the belly of some reptiles, including crocodilians and dinosaurs—or from the musculature of the trunk. This would mean that the gliding apparatus sat lower on the abdomen than it does in modern gliding lizards.

Combining this finding with others derived from the bone structure observed in the fossils, the researchers came up with a more refined vision of how this agile creature moved through its arboreal habitat.

“Sharp, curved claws and compressed body form support the idea that was perfectly adapted to moving vertically up tree trunks. The similarity in length of the forelimbs and hindlimbs further indicate that it was an expert climber—their proportional length assisted it in remaining close to the tree’s surface, preventing it from pitching and losing its balance. Its long, lean body and whiplike tail, also seen in contemporary arboreal reptiles, further supports this interpretation,” adds Valentin Buffa.

And as for its similarity to Draco?

“C. elivensis does bear a striking resemblance to the contemporary genus Draco,” Valentin Buffa says. “While its habits were likely similar to those of its modern counterpart, we do see subtle differences though.

“Like Draco lizards, Coelurosauravus was able to grasp its patagium with its front claws, stabilize it during flight, and even adjust it, allowing for greater maneuverability. An additional joint in one finger, though, may have enhanced this capability. This may have been a necessary compensation for the lower positioning of the patagium, which likely made it more unstable.”

How gliding animals fine-tuned the rules of evolution