Just over a week, that’s how long people have to wait until they can play Cyberpunk 2077. Well, that is unless you are one of what seems to be a fairly large number of people who’ve been sent the game early. Certain people have posted about them getting their copies from digital outlets over a week before release and others haven’t had to post about it, videos of the game have been popping up on YouTube like mad.

CD PROJEKT RED aren’t too pleased about the videos though. We knew this already, with the videos getting taken down incredibly quickly. However, just to make sure, the studio has released a statement to make it clear to everybody. Any videos, streaming or other similar content done prior to December 9th, 12:00 CET/03:00 PST, will be taken down. This does indicate that you’re likely to see reviews at this time too.

Cyberpunk 2077, Immortals Fenyx Rising and Other Exciting Games Coming Out in December

In the statement, which you will see in full below, the company indicates that they would like the world “to have the same – spoiler free – experience at the time the game releases”. With a game the magnitude of Cyberpunk 2077, as well as the size and scale of it – the secrets, the multiple story beats, it’s understandable to want to keep some of the surprises in the bag. 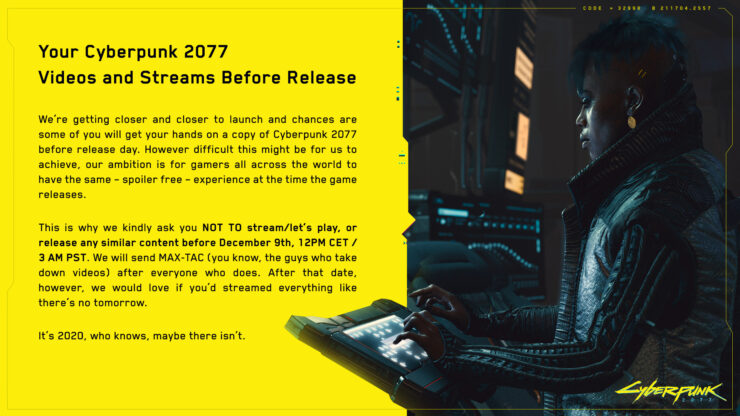 Speaking as somebody who reviews games, I often find games coming with requests to not spoil certain aspects of the story. Not only that, but it’s also just good practice. Those creating videos out of the excitement of having an early copy or simply looking to boost their presence online, they may not have the same standards and they certainly aren’t held under the same expectations as a reviewer.

As such, I can’t honestly complain about CDPR taking this step for Cyberpunk 2077 and posting a relatively friendly request, though being honest about the actions they will be taken against any offending content.