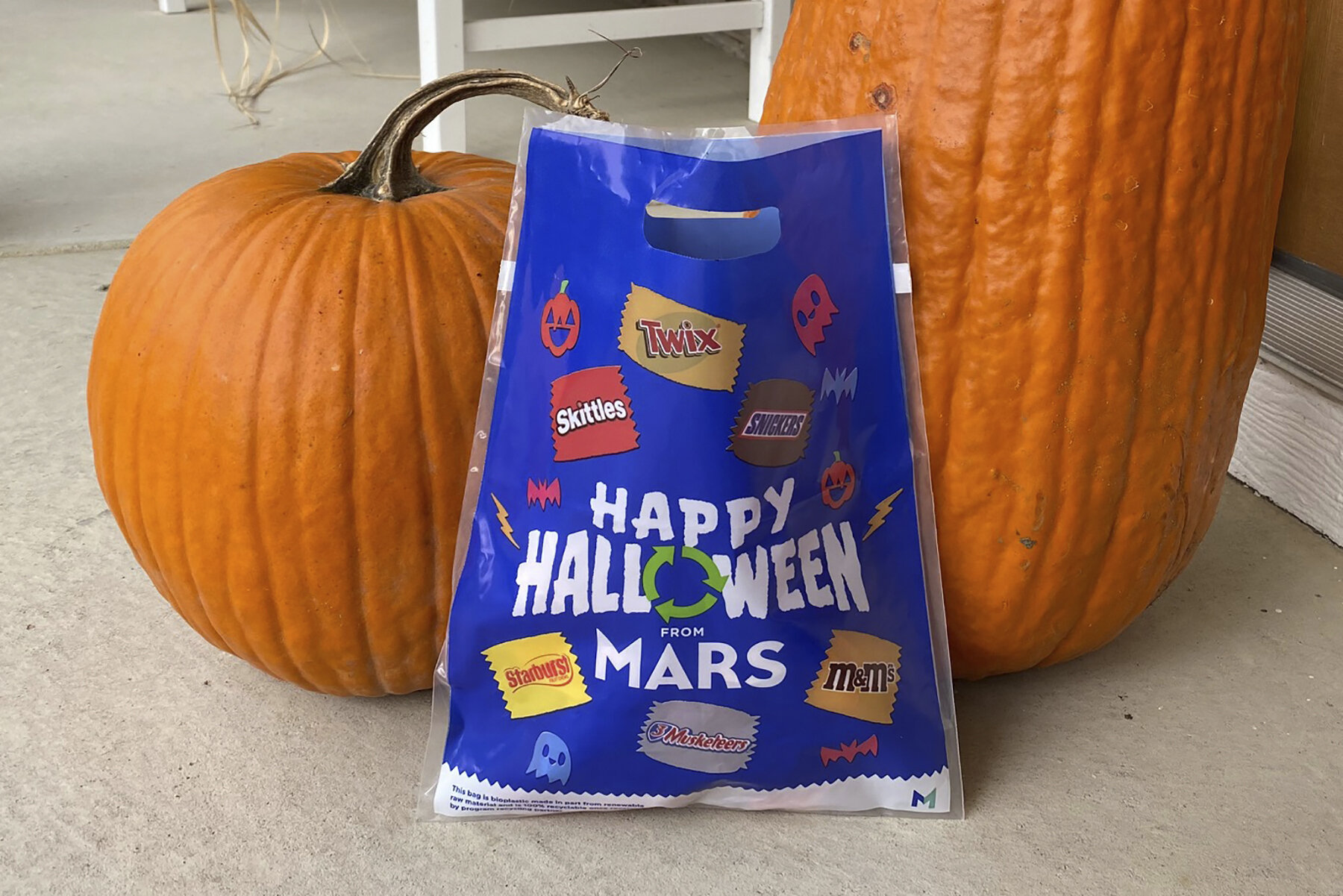 As America loads up on an estimated 600 million pounds of candy for Halloween, a handful of companies are trying to make it easier to recycle all those wrappers. But they acknowledge their efforts are only making a small dent and say more fundamental changes are needed.

Since the beginning of October, Mars—the maker of Snickers and M&Ms—has distributed 17,400 candy waste collection bags to U.S. consumers through its website and at community events. The bags can be filled with wrappers and packaging from any brand and mailed free to a specialty recycler in Illinois. That recycler, G2 Revolution, forms the packages into pellets and uses them to make waste bags for dogs.

The bags fit around 4 ounces of material; if all 17,400 are returned, that would equal more than 2 tons of recycled wrappers. But even then, the recycling program would still address just a fraction of the problem.

“What I’d like to see is this program actually goes away over time and we have a solution where it’s no longer required and we’re fully recyclable,” said Tim LeBel, president of sales for Mars Wrigley U.S.

Mars is partnering with Lexington, Kentucky-based Rubicon Technologies, a consultant and software provider that connects companies and municipalities to recyclers. Since 2019, Rubicon has had its own program called Trick or Trash, which mails one free box to schools, businesses and community groups to collect candy wrappers for recycling. An additional box, or a box for personal use, is $100; Rubicon says that covers the cost of making the box, shipping it both ways and recycling the wrappers. Rubicon expects to send out 5,000 boxes this year.

Mars and Rubicon won’t say how much they’re spending on their Halloween programs. Rubicon notes that it pays extra to UPS to offset the carbon emissions from shipping.

Plastic wrappers are ideal for candy for lots of reasons. They’re cheap and lightweight, which cuts down on shipping costs, said Muhammad Rabnawaz, an associate professor in the school of packaging at Michigan State University. They’re also easy to modify for different functions; some might have a coating so candy doesn’t stick to them, for example.

But plastic wrappers are a challenge for recycling companies. They often contain a mix of materials, like foil, which must be separated. They’re small and flimsy, making it easy for them to bypass typical sorting equipment. They have to be cleaned to remove grease, oil and other food waste. They’re multi-colored, so when they’re mixed together they come out as an unappealing brown.

Even when companies do go to the effort of recycling candy wrappers, they produce such a low-value plastic that it doesn’t recoup the cost of recycling.

“It’s got to be profitable. These guys aren’t social workers,” said Brandon Wright, a spokesman for the National Waste and Recycling Association, which represents waste management companies.

As a result, a lot of plastic packaging ends up getting thrown away. According to the U.S. Environmental Protection Agency, containers and packaging made up 21% of trash going into landfills in 2018.

The New Jersey-based recycling company recycles candy wrappers in the United Kingdom through partnerships with Nestle and Ferrero. In the U.S., the company will ship boxes to consumers to collect candy and snack wrappers and return them for recycling. A small box is $86; a large one is $218. TerraCycle said that covers the cost of shipping and the multi-part recycling process.

Leah Karrer, a conservationist in Washington D.C., bought a TerraCycle box in 2020 and collected 5 pounds of Halloween candy wrappers from about 20 neighbors. She liked raising awareness about the problem and supporting TerraCycle, but she hasn’t done it again because the box was so expensive.

“This is not a cost-effective solution for most families, when the items can simply be thrown into a trash container to be picked up for free,” she said.

This year, she ordered a free bag from Mars, so that she can send a message that consumers care about plastic waste and want companies to switch to sustainable packaging.

“The onus cannot be on the customer to fix the massive plastic waste problem,” she said. “The solution is system change.”

Candy makers say they’re spending millions to develop new packaging that would be easier to recycle or compost.

“The problem isn’t the number of candy wrappers on Halloween, but the 365 days a year that our infrastructure is set up to throw away,” she said.

Denial of responsibility! TechCodex is an automatic aggregator of the all world’s media. In each content, the hyperlink to the primary source is specified. All trademarks belong to their rightful owners, all materials to their authors. If you are the owner of the content and do not want us to publish your materials, please contact us by email – admi[email protected]. The content will be deleted within 24 hours.

James Cromwell Gets Emotional While Talking About…