Back in my day, everything was 90 degree angles

I was a pretty Doom-obsessed kid. After playing it on my Uncle’s computer, I begged my parents for it when we got an Intel 486 powered PC of our own. I never got it for PC, but it wasn’t because my parents were afraid of exposing an eight-year-old to violence. They eventually bought me Duke Nukem 3D and the SNES port of Doom (which was better than no Doom). No, I think computers were just a mysterious device to them and they were afraid I’d load it up with games. Which I probably would have!

However, our PC did come pre-loaded with a bunch of shareware, and one of the titles that interested me most that didn’t have Duke Nukem in the name was Blake Stone: Aliens of Gold. It was kind of like Doom. It was a first-person shooter back in the days when that term didn’t really exist. It’s not Doom, however, and that’s okay.

If you haven’t heard of Blake Stone, there’s a good reason for that. It was released a week before Doom. When you’re flanked by the first-person shooter of the time, you’re not going to stand out. Especially considering Blake Stone was built in the Wolfenstein 3D engine, which was obsolete the moment Doom hit the shelves.

A lot of Wolf 3D’s limitations are still there. Every level is flat. All the corners are 90 degrees. There are only five weapons. However, it’s definitely not Wolf 3D.

The story involves the titular spy infiltrating (assaulting is probably a better term) the various STAR installations created by Dr. Goldfire in his bid to rule the world. Along the way, he fights robots, humans, and mutants while picking up gold bars that are just lying on the floor. Immediately, there’s more variety than the game whose engine it’s based upon, but you’d certainly hope so considering this is a year-and-a-half later. 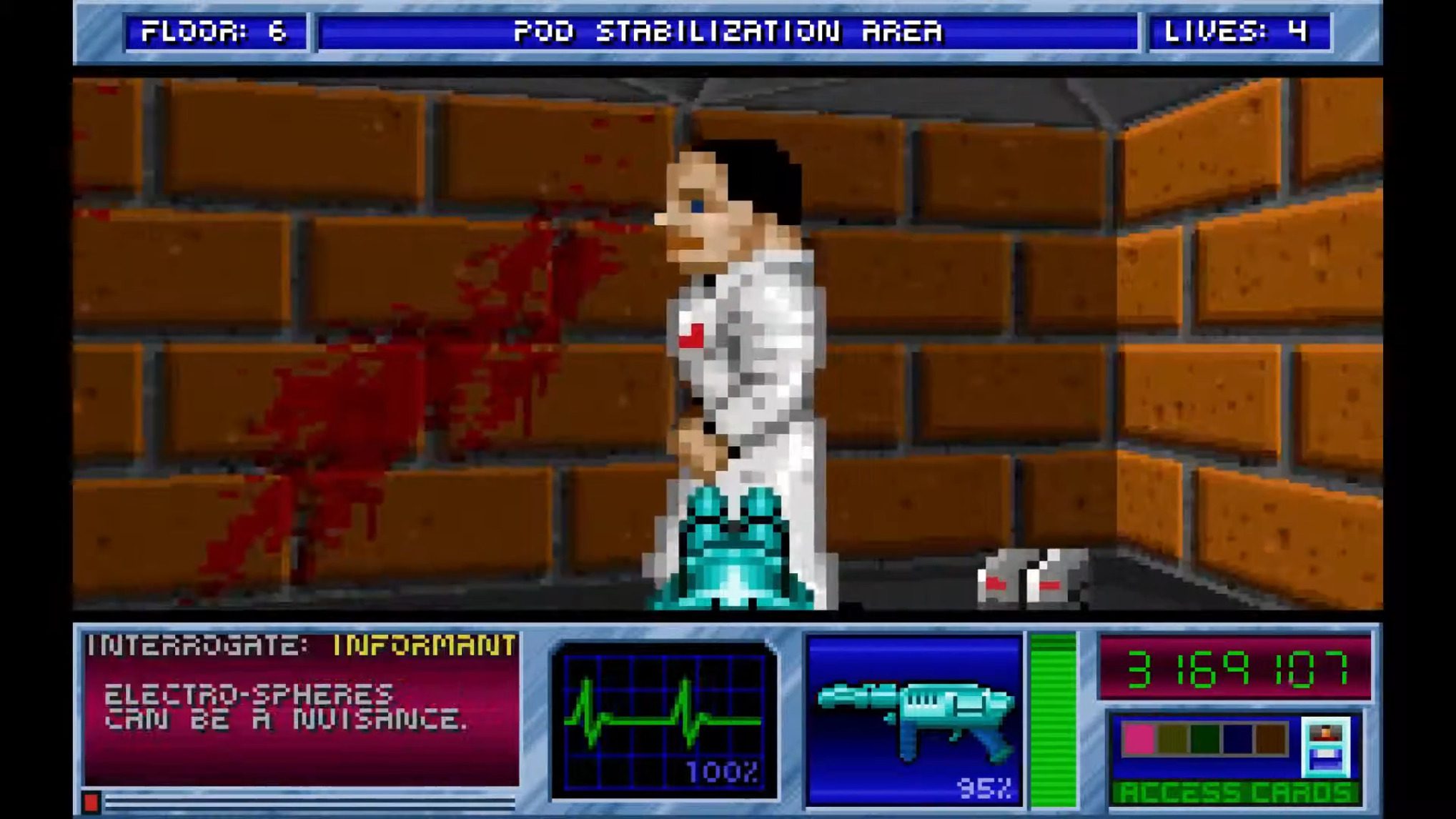 The structure is perhaps where the biggest difference lies. In Blake Stone, Rather than a linear progression of levels, there’s an elevator that takes you to each floor. Your goal is to find the keycard for the next floor, but you can go back to previous levels to scour them for resources and gold bars. There are your typical secret doors that can be found by aggressively humping the walls, and the game gives you a score at the end of each episode.

There’s also the inclusion of friendly scientists who roam around most of the stages. They’re indistinguishable from the scientists that call you a dick and then shoot at you, but killing them hurts your final score. Talking to them also gives you extra ammo and tokens to use in the game’s vending machines.

Vending machines. It doesn’t matter if you’re on Earth or in an orbiting fortress, there are vending machines everywhere. As long as you have the tokens available, you can get healing food. I cannot stress how amazing this feature is. You know how, like, every first-person shooter since Half-Life has had vending machines? Imagine you could use those to destroy your diet! Like in Deus Ex! 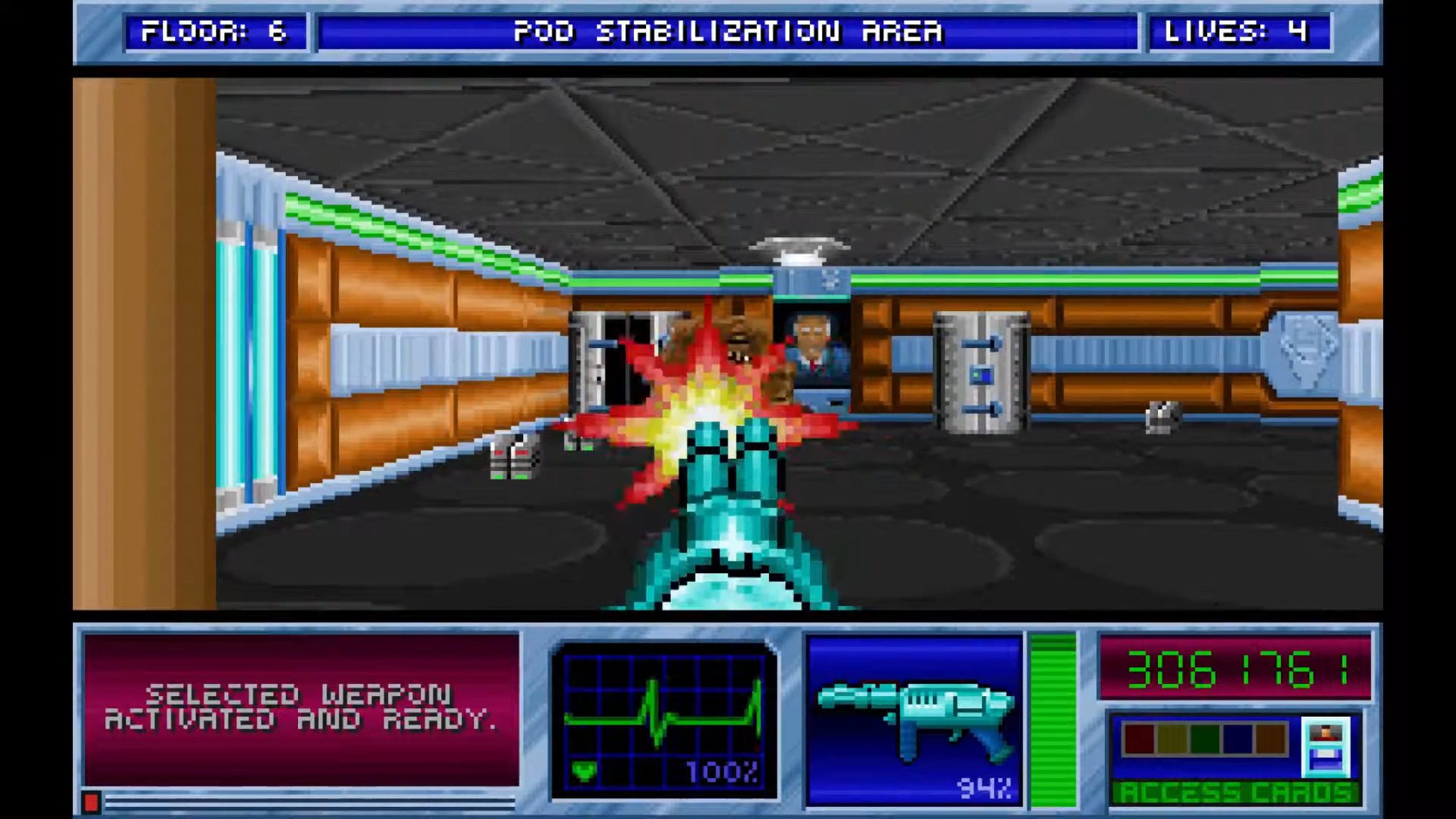 It’s the little ways that Blake Stone goes beyond being a simple ‘90s FPS that make me love it. The music is interesting, the wallpaper makes every building look like a break room, and the levels aren’t quite as abstract as something like Doom. To this day, I enjoy playing it over Wolfenstein 3D or even Rise of the Triad (another game based on the Wolf 3D engine).

The enemies are varied, with new ones appearing in each episode. The levels are less so. Even though you venture underground and into space, most of them share the same textures; ones that make every level look like someone’s rec room. There’s usually something new to see on each episode, but I’m kind of past getting excited about a new color of wallpaper. 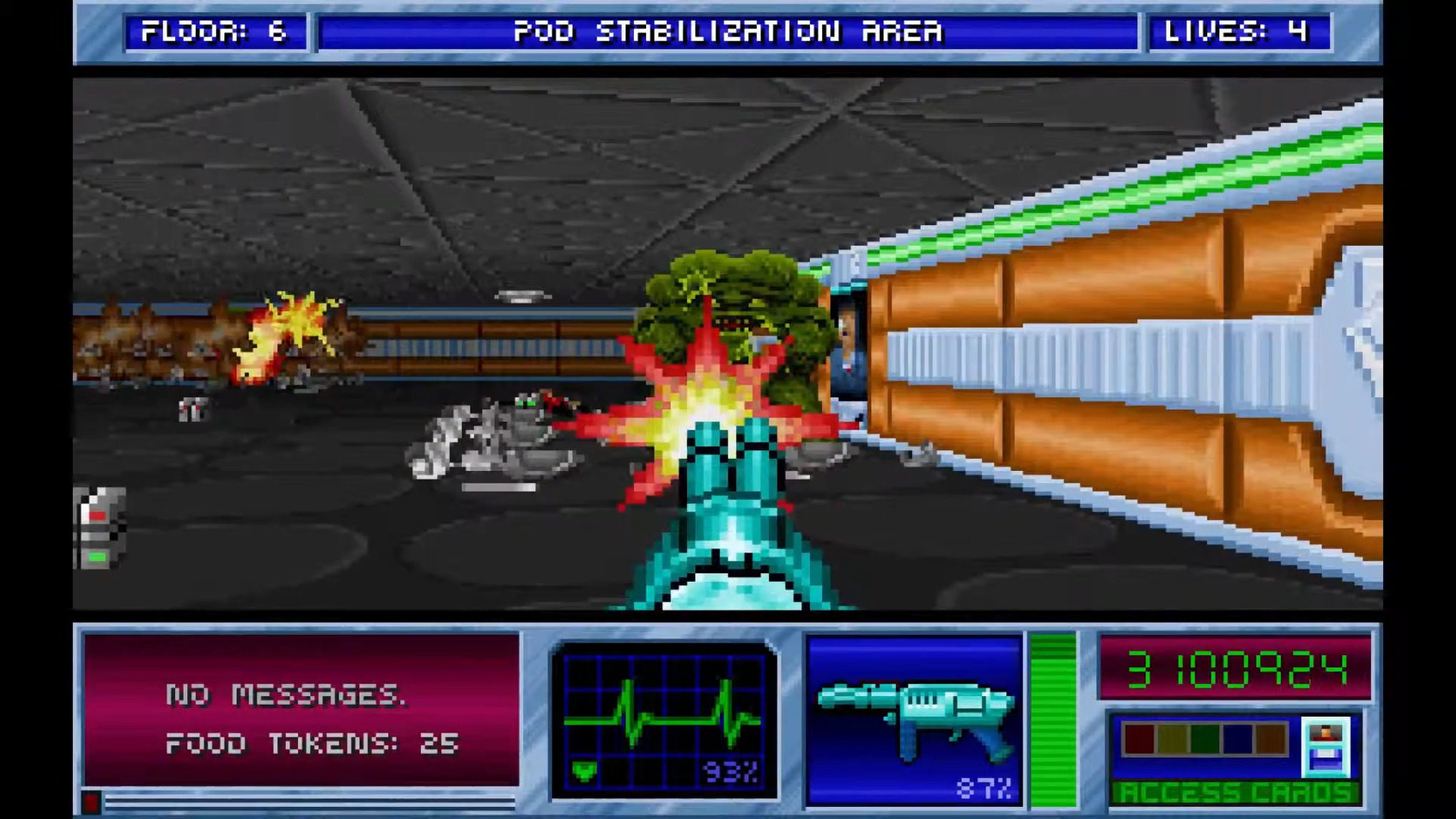 I can’t get over the abstract sound effects that ping at you as you hoover up loot with your feet. I didn’t reunite with Blake Stone until years after my childhood experience, and those chirpy, fun little tunes that each weapon and pick-up makes still made the hair stand on the back of my neck.

At the same time, don’t let me oversell it. If you can’t stomach pre-Doom shooters, then this one isn’t going to change your mind. It isn’t Doom. It lacks the energy and strategy of that seminal FPS. It’s a major improvement on Wolfenstein 3D, but that’s as far as I’m willing to take it. It’s a bright and creative mural painted over the old colors, not a groundbreaking new approach.

They didn’t fix that weird damage algorithm that Wolfenstein 3D had. No, I’m serious, have you ever looked into it? It takes into account difficulty, the enemy type, distance, whether or not you’re looking at them, the speed you’re moving, and two random numbers, then calculates how much pain you’re in. This means that you can be hunky-dory one minute, then the next minute your life has been eaten by a generic guard that caught you buying a sandwich at a vending machine. Say what you will about Wolf 3D, but I feel like we could have done without that math equation judging our fate. 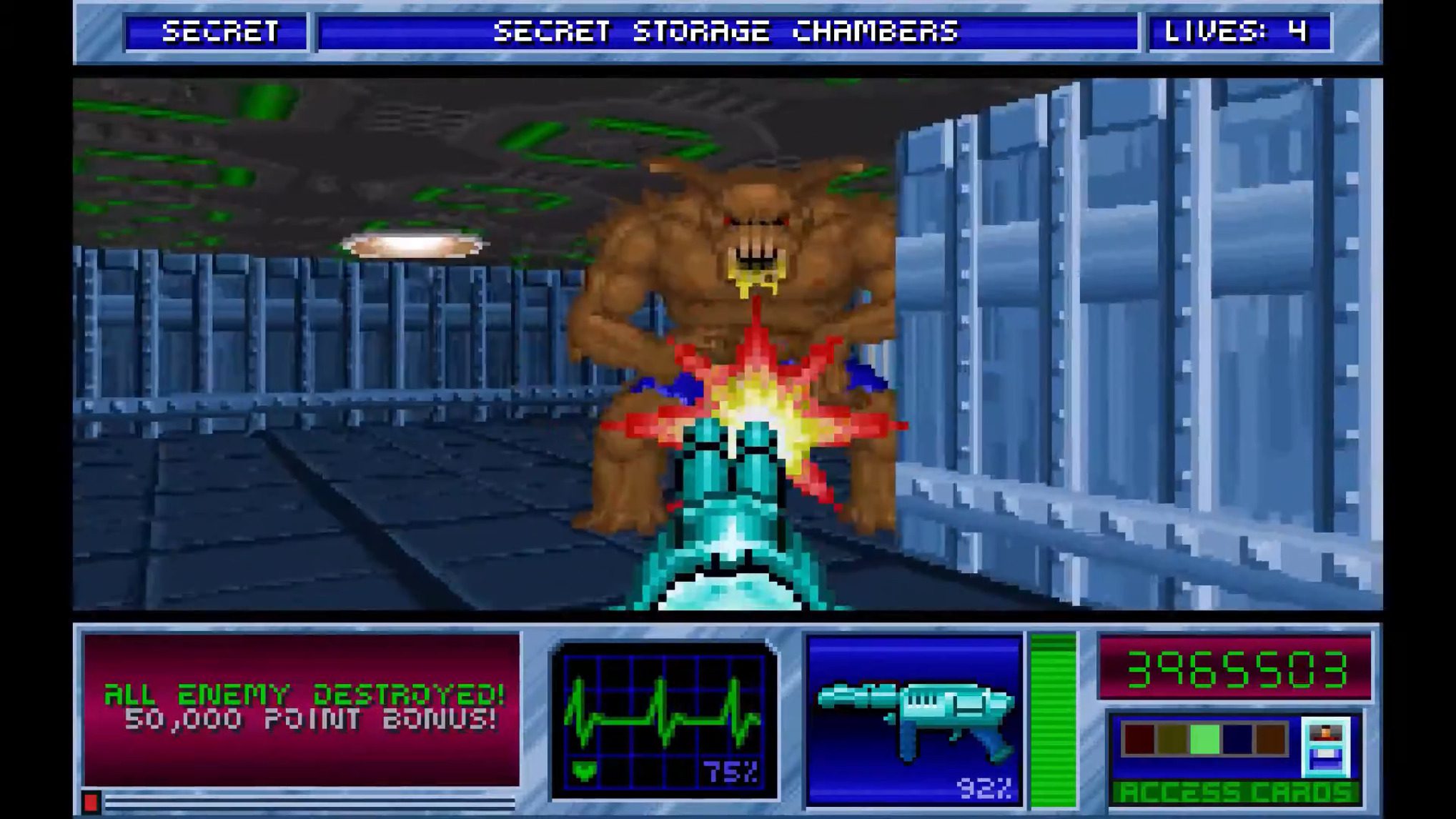 Blake Stone was originally a shareware game, which meant the first episode was free. That’s a decent amount of gameplay if you went for completion. In total, there are six episodes with nine levels each. There are also two secret levels for every episode, making a total of 66 levels. It’s a lot, honestly, and even with the tweaks they did to the Wolf 3D gameplay, it gets stretched pretty thin.

Then a year later they came out with Blake Stone: Planet Strike, and as much of a fan that I am of the first title, I have barely touched the second. It’s too much Blake. I can only look at so many 90 degree angles before I start foaming at the mouth.

Despite that, Blake Stone is the franchise that I’d most like to see a modern upgrade to. The mix of espionage and first-person shooting was an interesting thing in the pre-Goldeneye 007 era. If it isn’t taken too seriously, I could see Blake Stone making a fine addition to the neo-olden FPS wave. Please?

Zoey is a gadabout gaming hobbyist. She’s been playing video games all her life and is a lover of both new and retro games. She enjoys digging in the dirt and picking out the games that are perfectly fine if you clean them up a bit.

Bridge Of Spirits’ could get new combat scenarios in the future

Perfect Dark is getting help from the Tomb Raider studio

Everything Announced In the Latest Nintendo Direct – IGN Daily Fix