Best Nintendo Switch Horror Games To Play Ahead Of Halloween 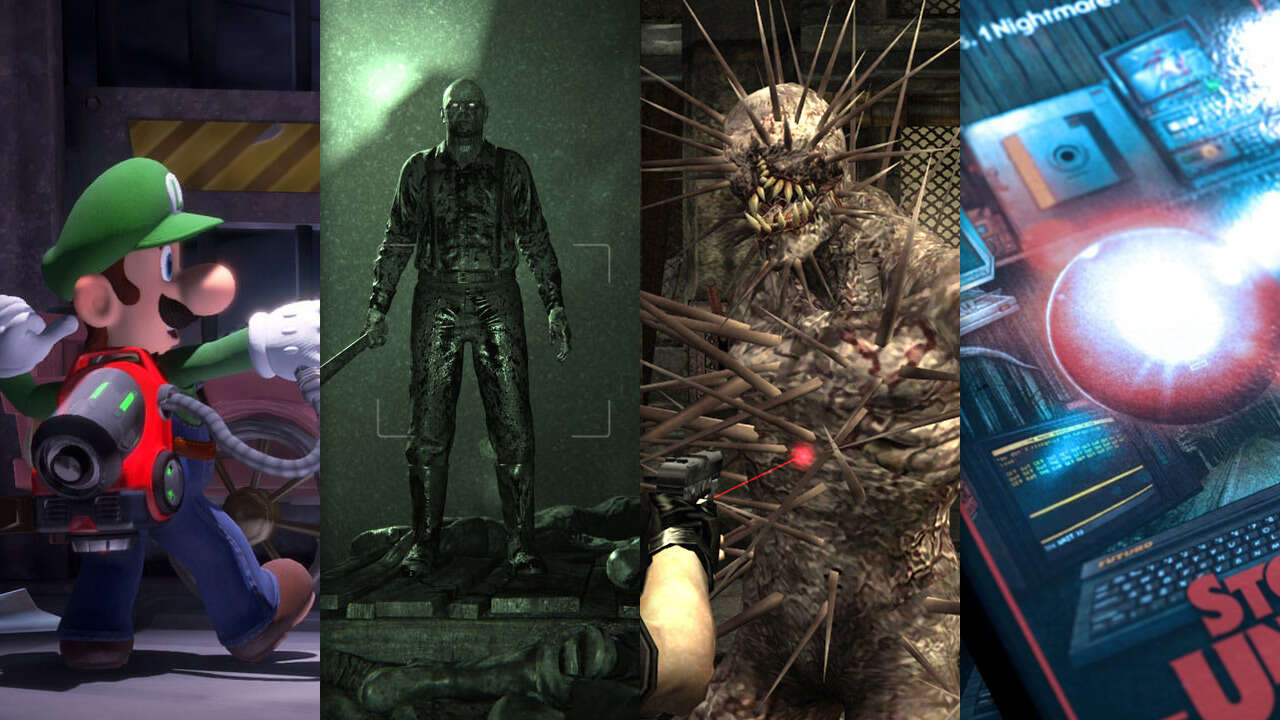 The Nintendo Switch has earned praise over the years for being a perfect bridge between handheld gaming and a more traditional home console experience. It’s also the best console for ensuring that you’ll never get a good night’s sleep, as not even the usually impregnable fortress of your bedsheets can save you from the monsters contained within that console once a few horror games have been downloaded. With the recent release of the Nintendo Switch OLED Model also visually amplifying those handheld terrors and Halloween around the corner, now’s a great time to look at the games that are worth having on that device in the spookiest of all months.

Starting this list off with a killer compilation, you can’t go wrong with the Amnesia: Collection that bundles the genre-defining horror games into a stomach-churning digestion of its greatest hits. The Dark Descent, the expansion Justine and the sequel, A Machine for Pigs, are all included here in case you missed out on them the first time, all brought up to a more modern standard of graphical gore. A triple-threat benchmark in horror game storytelling for its era, this blast from the past is still capable of making you jump.

Carrion flips the script on the usual monster mayhem, as this time you’re the one that’s in control of a body horror experiment gone awry. While it’s absolutely satisfying to throw a grisly blob of tentacles and muscle tissue around a level with reckless abandon, it’s also unnerving to see this creature in action. Even the retro graphics of this game can’t hide the disturbing nature of this bioweapon, as victims scream before they’re torn asunder, and the superb sound design sends a shiver down your spine as you ooze through stages. The entire experience plays out with disgusting beauty.

No matter how tough your party is, descending into a deep and grim dungeon is bound to leave a few scars on your psyche if you manage to survive the experience. Darkest Dungeon captures that journey perfectly, mixing nightmare fuel visuals with a cast of characters who are haunted by the terrors that they’ve seen in the shadows. As awful as that mental descent is, on Switch the game plays brilliantly thanks to an option to use the console’s touchscreen for its turn-based RPG action.

Pure stress and horror wrapped up in a portable package, Darkest Dungeon may be disturbing but at least its gameplay loop is worth enduring the chills locked within its deepest jails.

Unsettling is one way to accurately describe Darkwood, a game that drags you into its forest with nightmarish monsters, an atmosphere that chokes you with its foreboding dread, and a story that knows exactly how much information it needs to keep hidden in the shadows. A collection of horrific secrets and a purposefully stifling art design that’ll have your hairs standing up on end whenever you venture into its infected woods, this creepy game knows you’ll be both repulsed by its themes and hopelessly addicted to its fascinating atmosphere.

No matter what terrors the mind can conjure, nothing is more terrifying than the monsters lurking within our own society. Detention draws inspiration from this idea, using the political peril that was commonplace during the 1960s in Taiwan to tell a fascinating story. With an escalating sense of tension as you move through its eerie atmosphere, Detention’s unpleasant nature only increases as you’re subjected to spine-tingling sound design that lets your imagination fill in the gaps. A handheld masterpiece of political terror, Detention’s story is as disturbing as it is impactful.

Techland’s superb zombie apocalypse game is deceptively easy once you start playing it and parkouring over the undead hordes during the daylight hours, but once the sun sets, that’s when the game really begins.

More vicious infected people emerge, and every sprint between safe zones is a desperate experiment in fight or flight survival as the world around you bites back. Tense from start to finish, Dying Light is a pulse-pounding sandbox backed up by years of thrilling content.

You’d expect any game from the developers of Limbo (more on this later) to carry the torch of that grisly adventure, and developer Playdead didn’t disappoint with 2018’s Inside. A grim puzzle-platformer, Inside wastes no time in establishing its dark tone and packing a surprising amount of unsettling content into its lithe frame. Monsters of every shape and form can be found within it, and with the OLED screen of the new Switch model providing perfect contrast, Inside’s desaturated art design looks better than ever. If you can survive long enough to appreciate it, that is.

Read our Inside review.

Arguably the first horror game that was firing on all cylinders for the Switch during its infancy, 2018’s Layers of Fear: Legacy perfectly recaptured the suspense of the game when it debuted on other platforms and updated itself for the Switch’s hardware. That move resulted in a game that was creatively surprising as you guided a tortured artist through various nightmares across a canvas of rich and detailed creepiness. A moody exploration of a painter watching the world fall apart around them, this incarnation of Layers of Fear runs wonderfully on Switch in either of its signature modes, and with the Inheritance DLC added in, it’s a terrifically terrifying value for money.

As previously mentioned, Limbo was Playdead’s breakout game for good reason. Monochromatic in the art department and crawling with a general sense of unease, you knew something bad was going to happen whenever you played it and yet you could never stop. Maybe death would come from a mistimed jump, maybe you were torn apart by a giant spider that hungered for your flesh, or perhaps you’d fall victim to a number of other grisly ends that were spread out across the way. Another game that looks better than ever if you’re using the Switch OLED Model, Limbo hasn’t lost its uniquely gruesome charm over the years.

Not exactly the scariest game on this list, Luigi’s return to haunted locations is the perfect horror game for the younger members of the family. Admittedly fun for any age, Luigi’s Mansion 3 also has terrific co-op activities, the adorable Gooigi to play as, and just enough bumps in the night to give a younger gamer a shock but never a psyche-scarring scare as they put Luigi’s phantasm-catching vacuum cleaner to good use.

Bloober Team’s cyberpunk game may look like an homage to Ridley Scott’s Blade Runner film, but beneath the love letter to a darker tomorrow there’s also a psychologically intense mystery game to hack into. With the late Rutger Hauer providing one of his final performances, Observer strikes your eyeballs with rich world-building visuals, stomach-churning body horror, and clever use of the console’s rumble technology to shock you awake just when you think it’s safe to close your eyes.

A suspense-laden thriller that reels you in with a disarming collection of authentic characters, it’s not long before you realize that something is not quite right in Oxenfree. That’s when the game springs its trap, delving into sinister territory that isn’t just fun to play once, it’s absolutely essential to dive right back in for a second playthrough to get the full picture. With a sequel arriving next year, now’s as good a time as any to dive into developer Night School Studio’s supernatural mystery.

Many of the games on this list can rob you of sleep with the psychological horrors lying within them, but Outlast comes from an older school of terror. A sequel to the critically-acclaimed original game, Outlast 2 amps up its themes by adding in incredible level design, truly disturbing monsters, and a war between cults that leaves only victims in its religious persecution wake. With your protagonist constantly outgunned and forced to rely on the shadows for survival, don’t be too surprised if you find yourself constantly out of breath in this gorgeous and grisly horror game.

A true masterpiece of malignant fun even though it has a number of years under its belt, Resident Evil 4 is one of the storied franchise’s best entries, one that ably balances horror with intense action. Taking on Umbrella Corporation’s various bioweapons in Raccoon City was enough to make anyone’s skin crawl, but the very first time you shoot a raging Ganado in the head and see it erupt into an abomination of tentacles still makes for disturbing content.

Resident Evil 4 doesn’t stop there though, as Leon Kennedy’s mission sees him tangle with infamous chainsaw-wielding behemoths, infected dogs, and Novistadors that’ll ruin any Entomophobic’s night. Fail to stop them, and you’ll be subjected to seeing the grim fate that awaits Resident Evil 4’s hero and his perfectly-parted hair.

With a hum and a buzz of old-school technology, Stories Untold is a masterclass of suspense that packs a heavyweight punch into its brief runtime on the Switch. What makes the game so haunting is how it focuses on nostalgia, presenting warm memories of the past as dangerous and sinister entities that have taken root in our minds. Across a collection of stories that wouldn’t feel out of place in an episode of The Outer Limits, Stories Untold excels at being constantly unnerving, and with a killer aesthetic to boot, it’s a shocking exploration of how corruptively memorable a good horror story can be.