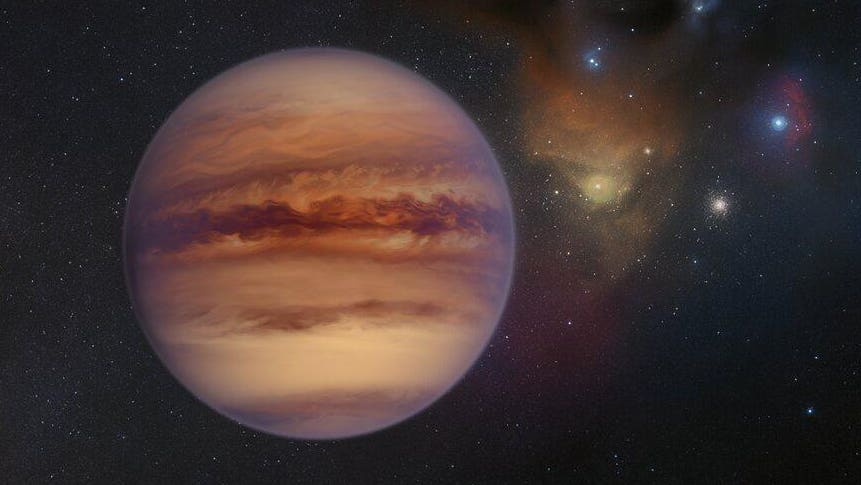 A team of astronomers have discovered at least 70 new “rogue” planets in our Milky Way galaxy. It’s the largest group of these “galactic nomads” found so far and could teach astronomers how these mysterious cosmic oddities came to be.

Rogue planets are planets that move through space without orbiting a star. Often described as free-floating, they’re isolated bodies that are planet-like, having possibly been ejected from a star system. Another theory is that rogue planets can form from the collapse of a gas cloud that is too small to lead to the formation of a star.

“We did not know how many to expect and are excited to have found so many,” said Núria Miret-Roig, an astronomer at the Laboratoire d’Astrophysique de Bordeaux, France and the University of Vienna, Austria, and the first author of the new study published today in Nature Astronomy.

So how did they find them? Though dark and cold—and therefore impossible to find—Miret-Roig and her team used the fact that rogue planets are still hot enough to glow in the few million years after their formation. So they can be detected by sensitive cameras on large telescopes. “We measured the tiny motions, the colours and luminosities of tens of millions of sources in a large area of the sky,” said Miret-Roig. “These measurements allowed us to securely identify the faintest objects in this region, the rogue planets.”

All 70 new rogue planets have masses comparable to Jupiter’s in a star-forming region in the Upper Scorpius and Ophiuchus constellations. Ophiuchus is known as the 13th constellation because despite being a large constellation on the ecliptic—so therefore hosting the Sun just like Leo, Taurus and all the others—it was the victim of ancient Babylonians hatred of the number 13.

MORE FROM FORBESCan A Planet Exist Without A Star? $3.2 Billion Mission Will Count ‘Rogue Planets’ In Our BackyardBy Jamie Carter

To find the rogue planets the team used data from 20 years and from a range of telescopes, including the European Southern Observatory’s Very Large Telescope (VLT), the Visible and Infrared Survey Telescope for Astronomy (VISTA), the VLT Survey Telescope (VST) and the MPG/ESO 2.2-metre telescope in Chile.

“We used tens of thousands of wide-field images from ESO facilities, corresponding to hundreds of hours of observations, and literally tens of terabytes of data,” said Hervé Bouy, an astronomer at the Laboratoire d’Astrophysique de Bordeaux, France, and project leader of the new research. The team also used data from the European Space Agency’s Gaia satellite.

Could there be more rogue planets? “There could be several billions of these free-floating giant planets roaming freely in the Milky Way without a host star,” said Bouy. However, to find more scientists will require a bigger, even more sensitive telescope. Cue the ESO’s forthcoming Extremely Large Telescope (ELT), which is currently under construction in Chile. “These objects are extremely faint and little can be done to study them with current facilities,” said Bouy. “The ELT will be absolutely crucial to gathering more information about most of the rogue planets we have found.”

Denial of responsibility! TechCodex is an automatic aggregator of the all world’s media. In each content, the hyperlink to the primary source is specified. All trademarks belong to their rightful owners, all materials to their authors. If you are the owner of the content and do not want us to publish your materials, please contact us by email – [email protected]. The content will be deleted within 24 hours.
esoEuropean Southern Observatoryexoplanetsmilky wayOphiuchusrogue planets
0
Share

Survey says: Amazon, Google more trusted with your personal data than Apple is