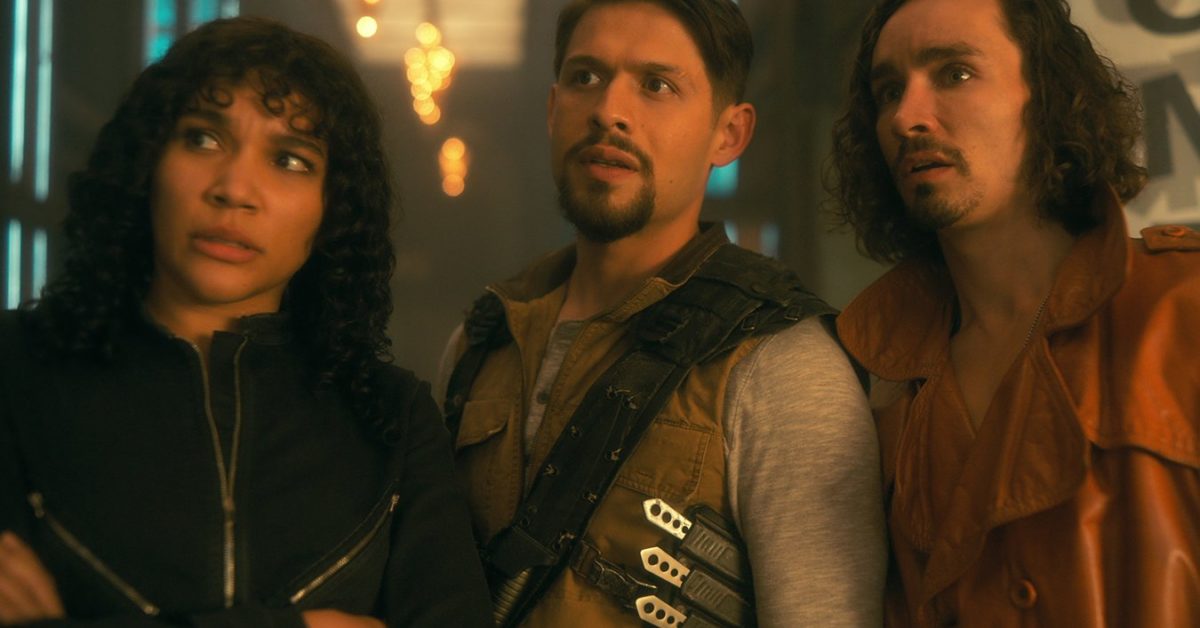 With June 22 only a little more than a month away, we might just have a clue as to when we will be getting an extended teaser or trailer for the third season of Netflix’s adaptation of Gerard Way & Gabriel Ba‘s The Umbrella Academy? As you can see from the key art that was released earlier today, we see some suitcases in the first one with “5” prominent on one of the dial locks. In the second piece, we have a key to a room at the Hotel Obsidian and the key number is “19”? So are we getting a trailer this Thursday, May 19th? Stay tuned…

In the following highlights from their interview with EW, Justin Min and EP & Showrunner Steve Blackman discussed the key differences between the Umbrella Academy & Sparrow Academy, how Min’s two “Bens” compare, what it was like offering an alt-reality take on a beloved character, and more:

Min on Thinking He Was Done with TUA After Ben’s Season 2 Finale Sacrifice: “That was a very emotional day for me because I thought it was my last day on set. I was in a complete haze. I remember going up to my hair and makeup people and being like, ‘thank you so much for being with me on this journey.’ I gave them thank-you cards!”

Blackman on Key Fundamental Umbrella Academy/Sparrow Academy Difference: “The way I thought about season 3 is, the Umbrellas are a family that didn’t know how to be superheroes. The Sparrows are superheroes who never knew how to be a family. That is the fundamental difference in how they go about being superheroes.”

Min on Approaching the Impact Being Raised a “Sparrow” and Not an “Umbrella” Had on Ben: “Steve [Blackman] and I really talked at length about this balancing act between nature versus nurture, and what that would do to someone like Ben. I think Ben, in his essence, is a very impressionable person, so I think nurture is a huge striving force behind whoever Ben is and whoever Ben becomes. So in this alternate reality where they’re being trained as these assassins and mighty superheroes who are famous and well-known, these are all things that we talked about leaving a great impression on Ben.”

Min Made Sure “Sparrow” Ben Wouldn’t Be Confused with “Umbrella” Ben (& It Was “Exhausting”): “I got to work with a voice coach while I was filming to slightly lower my register, as well as learn how to project more. And they wanted me to physically embody the character, so I had to go to the gym for the first time in many years. Having those external factors in place in terms of body and voice really helped me to inhabit the character in a real and convincing way.”

Unlike his “Umbrella” Counterpart, “Sparrow” Ben is More Than Fine with Using His Powers: “I think the previous version of Ben was fearful of his powers. It was something he never fully learned how to control on his own, so when these tentacles were unleashed, he didn’t know what would transpire. But since the Sparrows have been trained since such a young age to utilize their powers during combat, it’s something the new Ben feels much more control over. It’s a casual way for him to assert his superiority. In the very first montage where we introduce the Sparrows, you even see him using his tentacles to smoke a cigar and drink. It’s something he whips out as a party trick and will do very casually. He has control over it and he’s very proud of it.”

After putting a stop to 1963’s doomsday, the Umbrella Academy return home to the present, convinced they prevented the initial apocalypse and fixed this godforsaken timeline once and for all. But after a brief moment of celebration, they realize things aren’t exactly (okay, not at all) how they left them. Enter the Sparrow Academy. Smart, stylish, and about as warm as a sea of icebergs, the Sparrows immediately clash with the Umbrellas in a violent face-off that turns out to be the least of everyone’s concerns. Navigating challenges, losses, and surprises of their own – and dealing with an unidentified destructive entity wreaking havoc in the Universe (something they may have caused) — now all they need to do is convince Dad’s new and possibly better family to help them put right what their arrival made wrong. Will they find a way back to their pre-apocalyptic lives? Or is this new world about to reveal more than just a hiccup in the timeline?

Concrete Has A Dirty Little Secret. Can Biology Solve It?