Apex Legends is still going strong as one of the most popular battle royale games on the market, but the team at Respawn haven’t slowed their momentum for a second as they blast into the game’s seventh season, bringing with it a new character, a whole host of gameplay changes, and perhaps most importantly, a brand new character – Horizon. Respawn and EA was gracious enough to let us play a bit of their new map and season seven content early, and here are our impressions so far.

By far the biggest thing to be excited about with Apex Legends Season 7 is the new map, Olympus. Olympus is impressive in size and scope, like the other two Apex Legends maps, Kings Canyon and World’s Edge, but it’s all set upon a massive airship, making it quite unlike the other two grounded stages. Olympus looks entirely different from the other two maps in the game, being much brighter and more saturated, aesthetically feeling a bit closer to the visual style of Overwatch. But that’s no bad thing, as the bright lighting allows you to see other players more easily, and makes for a nice change after more than a year and a half of playing on maps filled with the usual shades of green and brown. 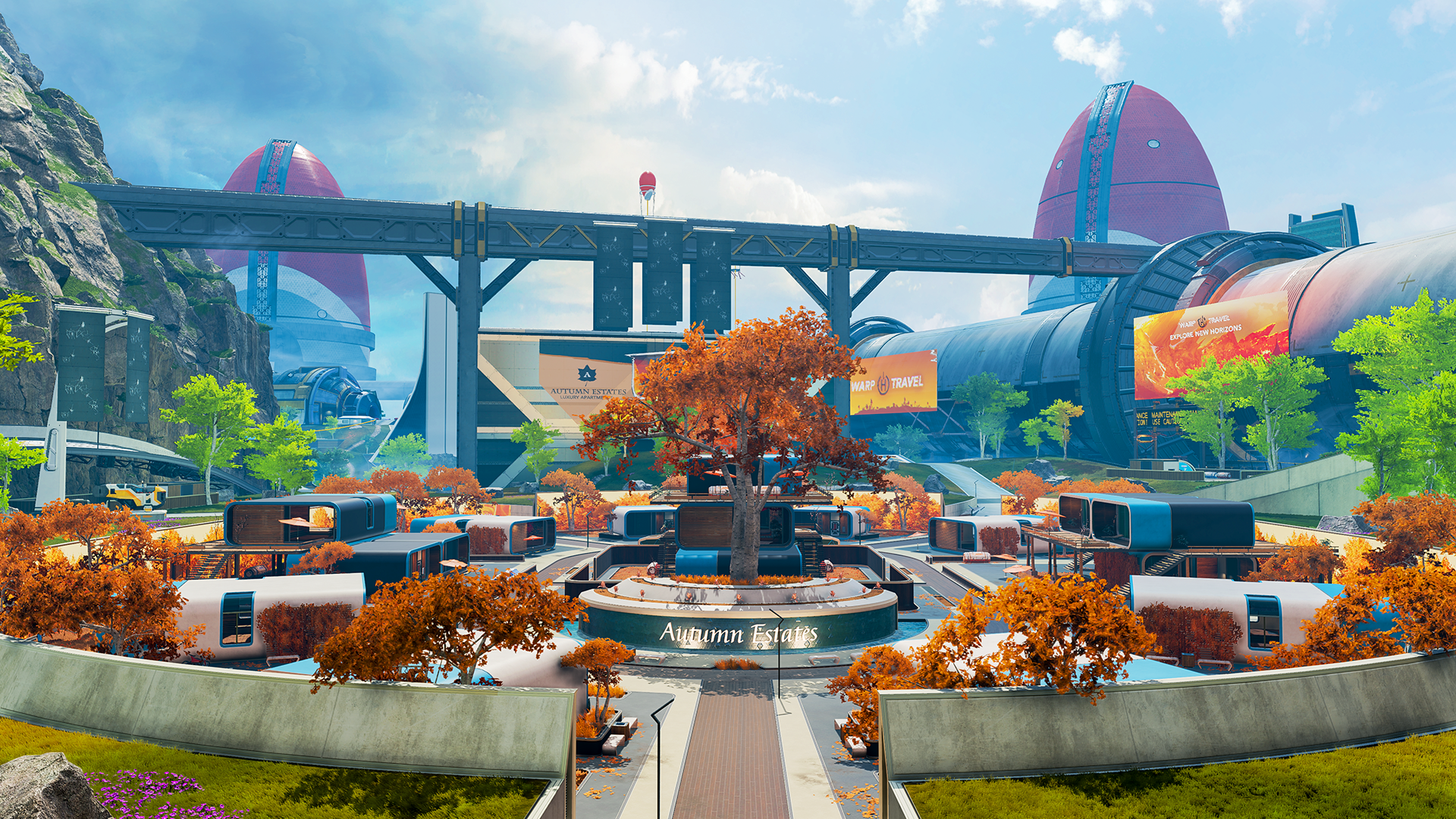 The map itself is far too large to properly explore within a few hours of play, but for the most part, the map is more flat, lacking some of the sheer cliffs and edges you’ll see in the other two maps. This makes sense for diversity and the fact that this airship is man-made, but can make things a bit more monotonous to explore. To make traversing the map itself continually interesting Respawn has done a few things. One is that large portions of the floor are cut out – climb over the barrier at the wrong point, and you’ll plunge into the sky below. This means you will inevitably find yourself in firefights from across a massive hole in the ground, forcing your team to think about moving around, and being unable to take the direct route – unless your chosen legend has some serious mobility, of course.

But the biggest change to traversal is, of course, the brand new vehicle. Most battle royale games have a vehicle to drive around in, but Apex Legends was a hold-out until now. That flat map was pretty much a necessity for this – the Trident is the name of the new vehicle, a speedy hover-car which can boost off of ramps, spin on the spot, drift around corners, and of course, has two spots for your pals to jump on and shoot at enemies as you drive-by. The Trident is great fun and clears through sections of the map quickly, so if you land somewhere unusually quiet, the Trident will be a great way to either grab attention or move somewhere more exciting. 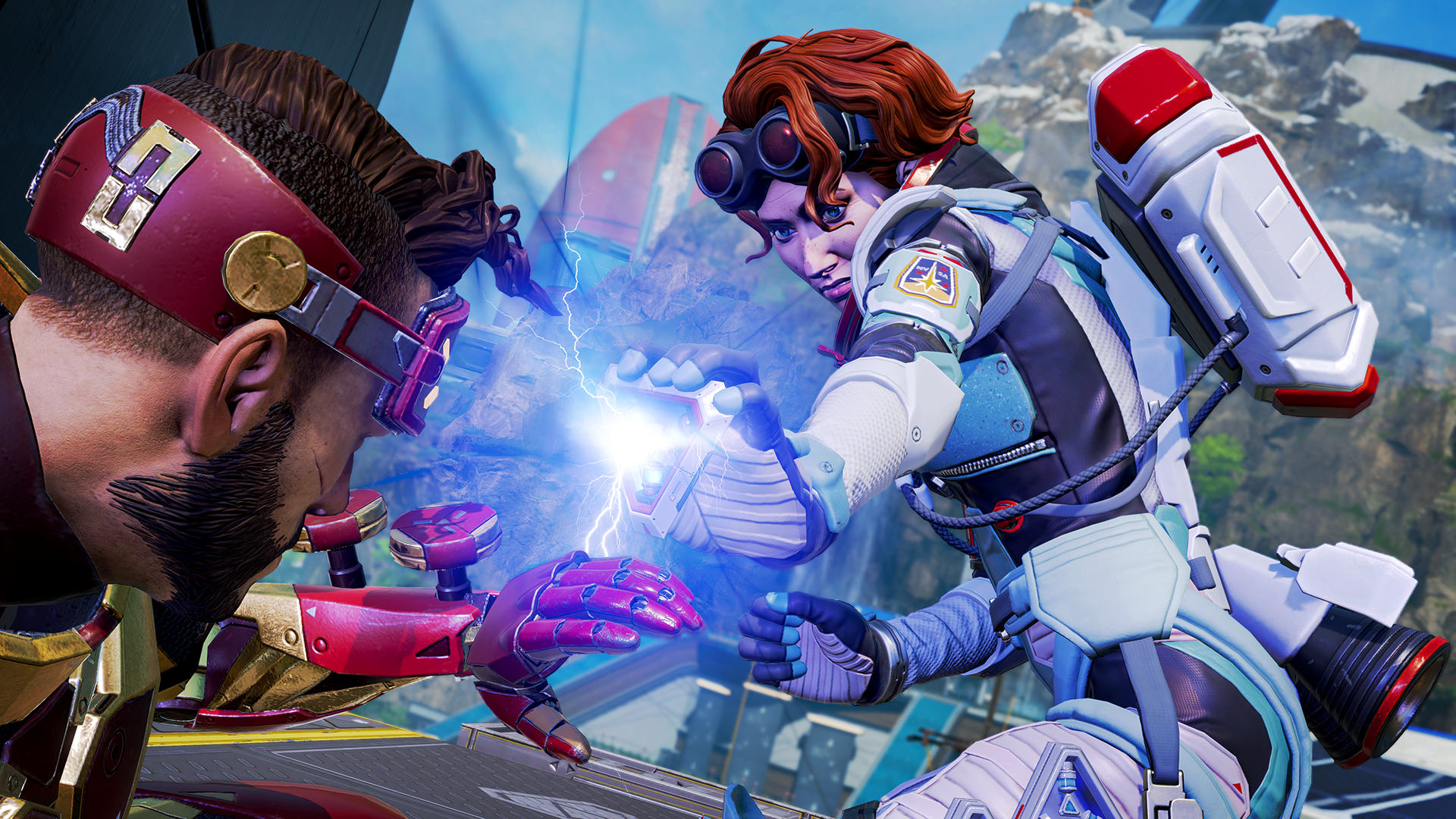 The most impactful part of the map to me was the Void. I get the feeling that this is likely to tie into Wraith’s plotline, but essentially the void is a section of the map that has been taken by a swirling storm, and inside the ground itself has been torn, with a giant energy orb, which acts as Wraith’s portal, swirling in the center. And when I say it acts as Wraith’s portal, I mean literally – if you get sucked inside it, you will be shot out of a portal closer to the center of the map. This area is noisy and destructive, a stark contrast from the harmony you see across most of the map, and that’s exactly what makes it interesting, and makes me personally excited to see more of what’s hidden away.

This is all without saying a single thing about Horizon, the game’s new (Scottish) legend. Dr. Mary Somers was introduced in an in-game challenge recently, and from that, we got a glimpse at Horizon’s gravity-defying technology which can lift players above buildings and walls to challenge opponents more creatively. But Horizon’s best and most fascinating piece of kit is the ability to drop a micro-black hole on opponents, pulling them in the center, opening them up to get riddled with bullets. And, most exciting for show-offs and streamers, the micro-black hole also bends bullet trajectory in the same way the Gravity Star did in Titanfall 2. If you’ve seen the trickshot videos, you know exactly what to expect.

This is all in addition to several quality-of-life features that will hopefully encourage regular players and new players to jump into the game more often with Apex Legends Season 7. You can create or join a Club, and Clubs will allow you to set up meeting points for your social circles, making it easier for your wider friend group to find players they’ll get along with and play well with. A nice move for long-term players and new ones alike, for those who’ve been in the game for a while likely have a small social circle already, and new players can find others to help ease them into the game.

In addition to that Apex Legends is, of course, getting another 100-level battle pass for dedicated players, and the progression system has been reworked slightly, giving you the ability to see quest progress mid-match and keep track of what you’re working towards more easily. And finally, Apex Legends is at last launching on Steam, opening the game up to millions more players. Put all of that together, and you have a very bright future ahead of what is already one of the best battle royale games you can play right now.

Apex Legends Season 7 is launching on all platforms on November 5th.

This Week In Security: Discord, Chromium, And WordPress Forced Updates

Vergecast: this week’s Section 230 hearing and the season of weird gadgets