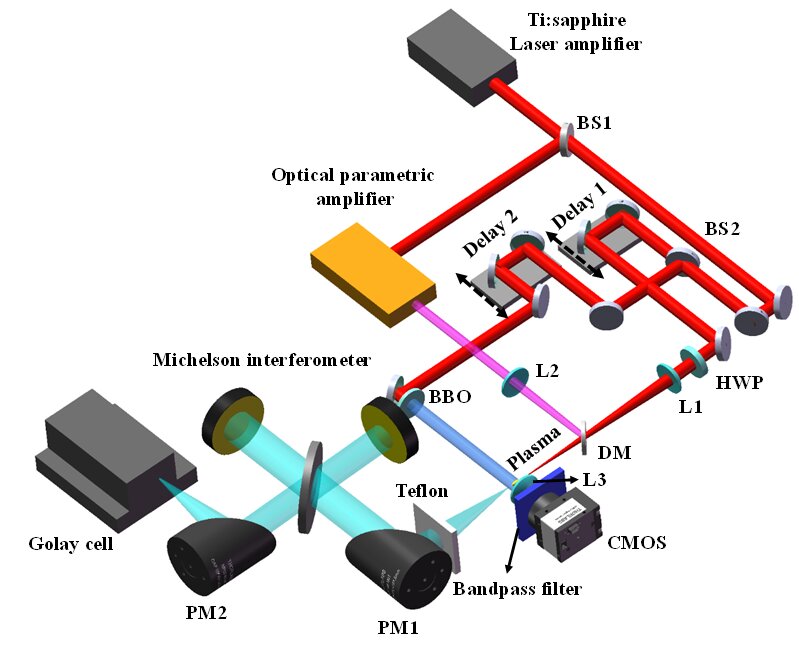 The strong terahertz (THz) waves generated by femtosecond laser pulse induced gas plasma have drawn extensive attention owing to the ultra-wide spectral bandwidth, the high electric field strength, and no material damage threshold. However, the abundant and multi-dimensional cross-scale light-matter interactions during filamentation intertwine, interact and restrict mutually, which not only puts the physical mechanism of THz radiation under debate, but also limits the optimization techniques of THz wave generation.

Although the THz wave generated from the two-color laser field filamentation has been most cited to be positively correlated with the air plasma density, the research conducted by Prof. Weiwei Liu’s group from Nankai University and Prof. Hiroaki Misawa’s group from Hokkaido University has shown a negative correlation between the radiated THz intensity and the plasma density during 1600 nm + 800 nm two-color laser filamentation. The electron capture of the excited nitrogen gas molecule in its excited states is believed to be the cause of the depressed plasma density, while the augmented THz radiation is ascribed to the higher electron drifting velocity.

Moreover, the energy difference between LUMO+6 and LUMO+7 corresponds to the energy of 1600 nm photon. Therefore, a 1600 nm laser may induce resonance between these two energy levels to trap electrons, which leads to the decrease in plasma density at zero delay. It is also noted that, though the free electron density in the plasma has a minimum value when Δt1 is small, it is still possible for Jnet to reach peak, thereby radiating the highest THz pulse energy. The drifting velocity accelerated by the two-color laser field has been confirmed to play a dominant role during the THz pulse generation.

The research results not only clarify the relative importance of electron drifting velocity and plasma density in THz radiation of filaments, but also point out the limitations of the traditional photocurrent model. The results are of great significance for optimizing the two-color laser filamentation to generate strong THz waves. Additionally, new questions on optical ionization mechanism in filaments are put forward.

The research was published in Ultrafast Science.