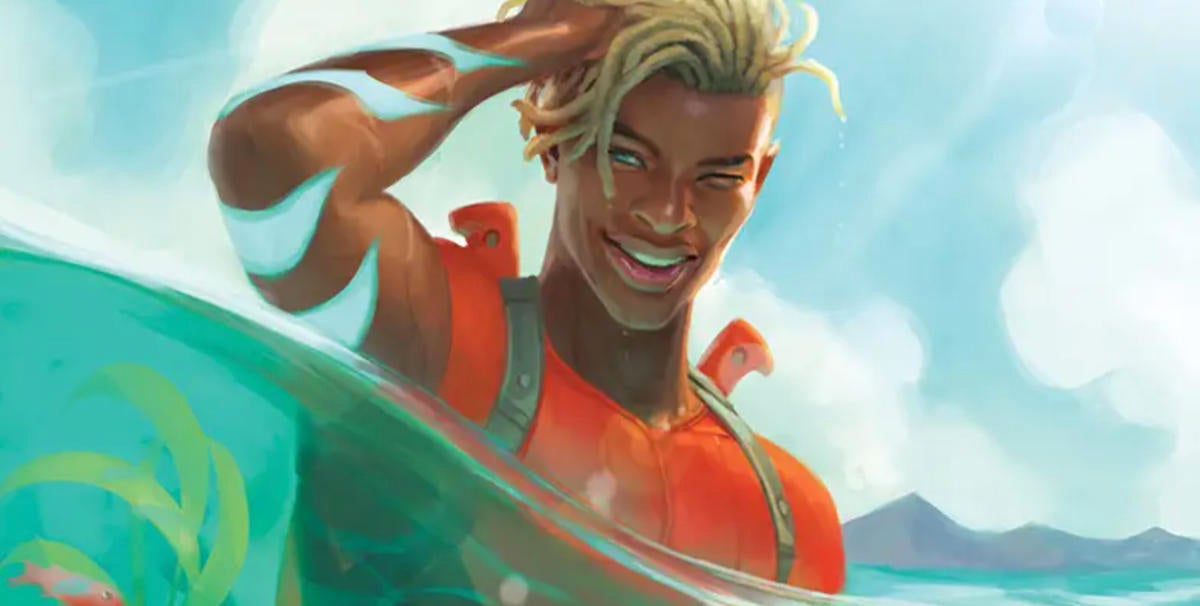 What writer Brandon Thomas and artist Diego Olortegui have created together in Aquaman: The Becoming #1 is a remarkable debut issue. In this brief 22-page comic they fully catch up readers with no knowledge of Jackson Hyde (a.k.a. Aqualad) while also weaving together references to the other Atlantean goings on in an incredibly satisfying fashion. Though the debut issue is forced to rely on a little help from Jackson’s friends, and has much of its narrative thrust carried by his relationship with other (perhaps more popular) heroes, that the story works on the whole makes it a very impressive #1 from DC Comics.

Even as the opening sequence throws the reader into the deep end without a floatation device, Becoming quickly allows readers to catch up on what Jackson Hyde’s status is in the DC Universe and how this new series will move him beyond that. Olortegui, along with inker Wade von Grawbadger, quickly shows off a kinetic style of capturing movement and action within these early pages that give readers a great breakdown of character through action. It’s sometimes easy for artists to skimp on detail when a lot of movement is occurring in comics set pieces, but Olortegui and von Grawbadger never shy away from making sure there is consistency across the entire issue, especially in panel-to-panel transitions.

Though readers quickly learn that the first pages aren’t exactly what they seem, they do lead into the parts of Becoming that work best, Jackson Hyde’s relationship with those around him. The scenes he shares with other DC heroes of the piece (Aquaman, Mera, several Titans) are like a kaleidoscope of his personality shades, but a sequence where he shares a meal with his mother and is on the receiving end of flirtations might be its best. Where Becoming really sings is in its quieter moments – the big splash pages that revel in the setting or the larger action panels that compliment the dialogue setting them up. One panel of Hyde emerging from the sea and into the morning air at Amnesty Bay is simply wonderful.

Thomas works in subtleties here through the dialogue but the facial expressions panel-to-panel from Olortegui and von Grawbadger are what really sell the emotions of this storytelling. Jackson, like most of us, is awkward at times, and even in the moments where he gets to be a hero his personality allows this to bleed through. In fact, the subtlety of the storytelling regarding Jackson’s place as a DC hero and also a queer person are all married in an impressive way.

As Jackson returns to Atlantis near the end of the issue for some more simulation training he hears all of the things we’ve just learned about him reflected back, but retold from the perspective of Aquaman: The Becoming’s unnamed villain. It’s a moment that delivers the thesis for the entirety of Becoming, bringing this character down to size in a way that will make his journey to becoming Aquaman all the more sweet.

10 Ways The Game Remake Can Improve On The Original

What Time and How to Watch