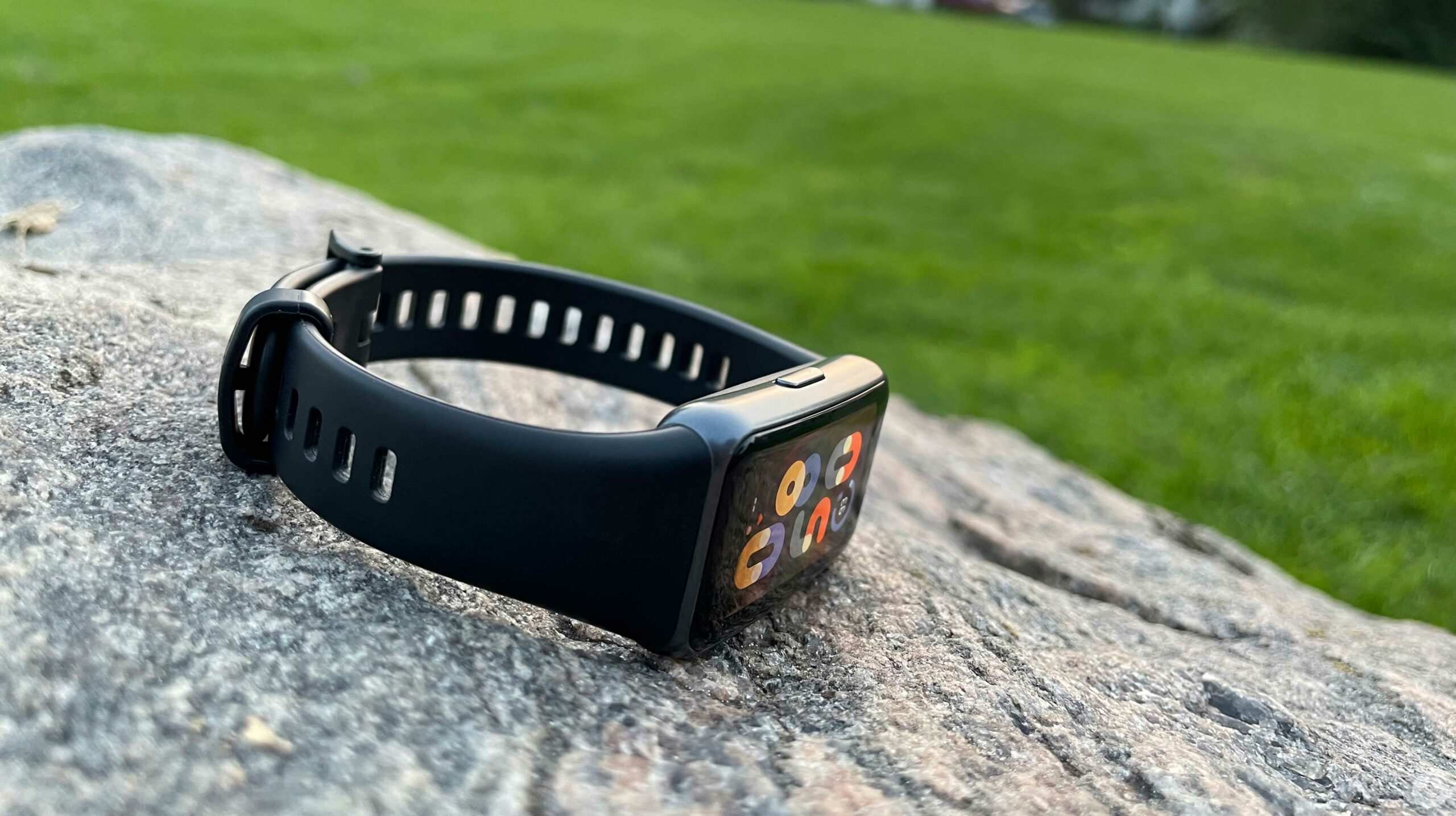 I’ve been putting the Band through its paces for the past two weeks, including walking, running, swimming and exercise monitoring.

The Huawei Band 6 features an impressive 194 x 368 pixel resolution and a 1.47-inch rectangular AMOLED FullView display that distinguishes it from its competition. It includes a physical button appropriately placed on the right side to navigate the interface. The button responds as soon as you press it, without any noticeable delay, making the experience of using the fitness tracker all the more satisfying.

The screen features ample brightness, though it does struggle with glare under direct sunlight.

The touch screen is extremely responsive, with enough space for the user to swipe up, down, left and right. The watch features minimal metallic bezels that measure in at just 0.75mm, resulting in a display with no distractions. 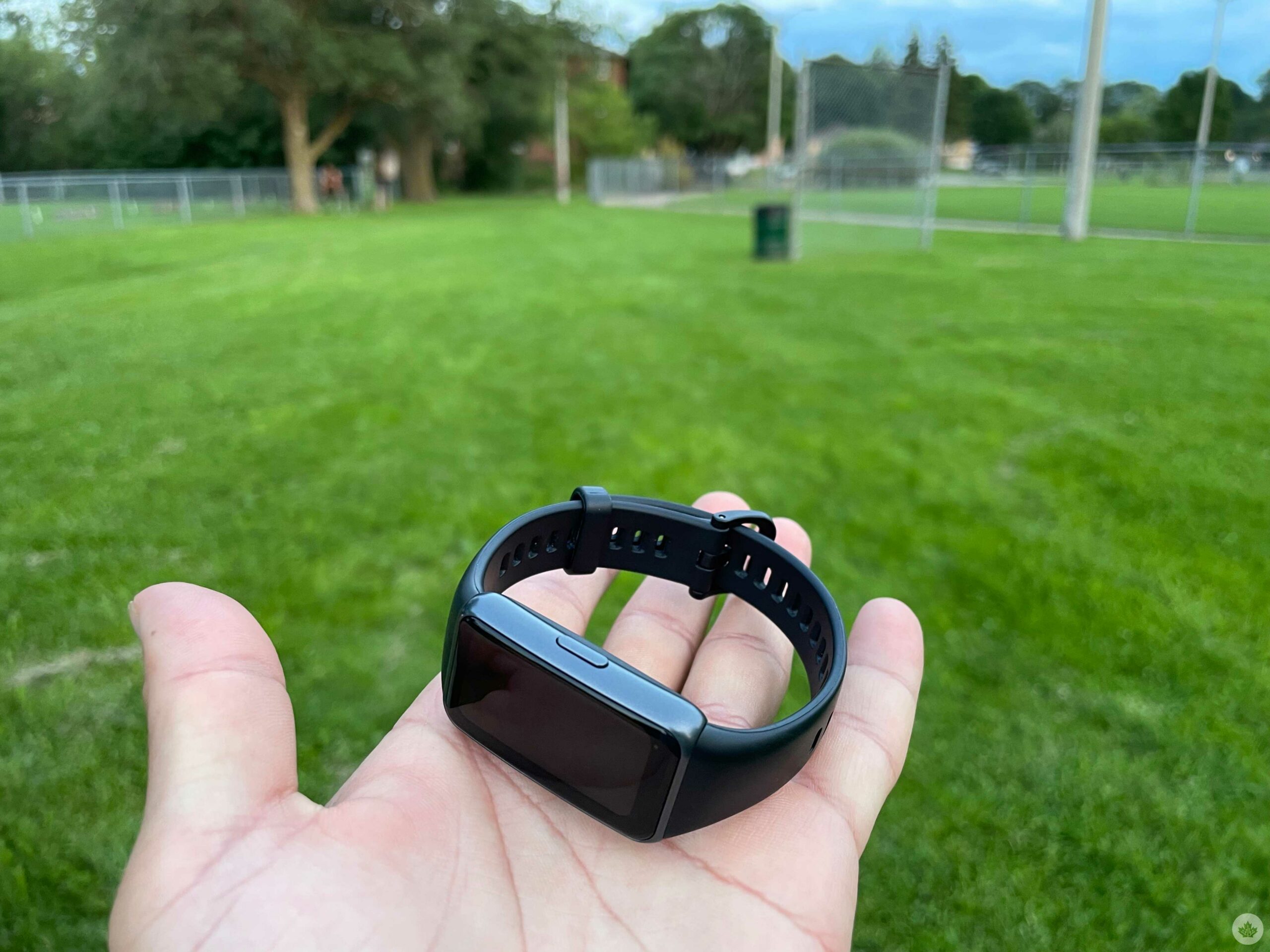 Further, the Band is so light that it barely ever made my wrist feel uncomfortable. The tracker’s body is made of plastic, weighing in at 18g, with a matte finish that gives it a premium look and helps avoid fingerprints and smudges. 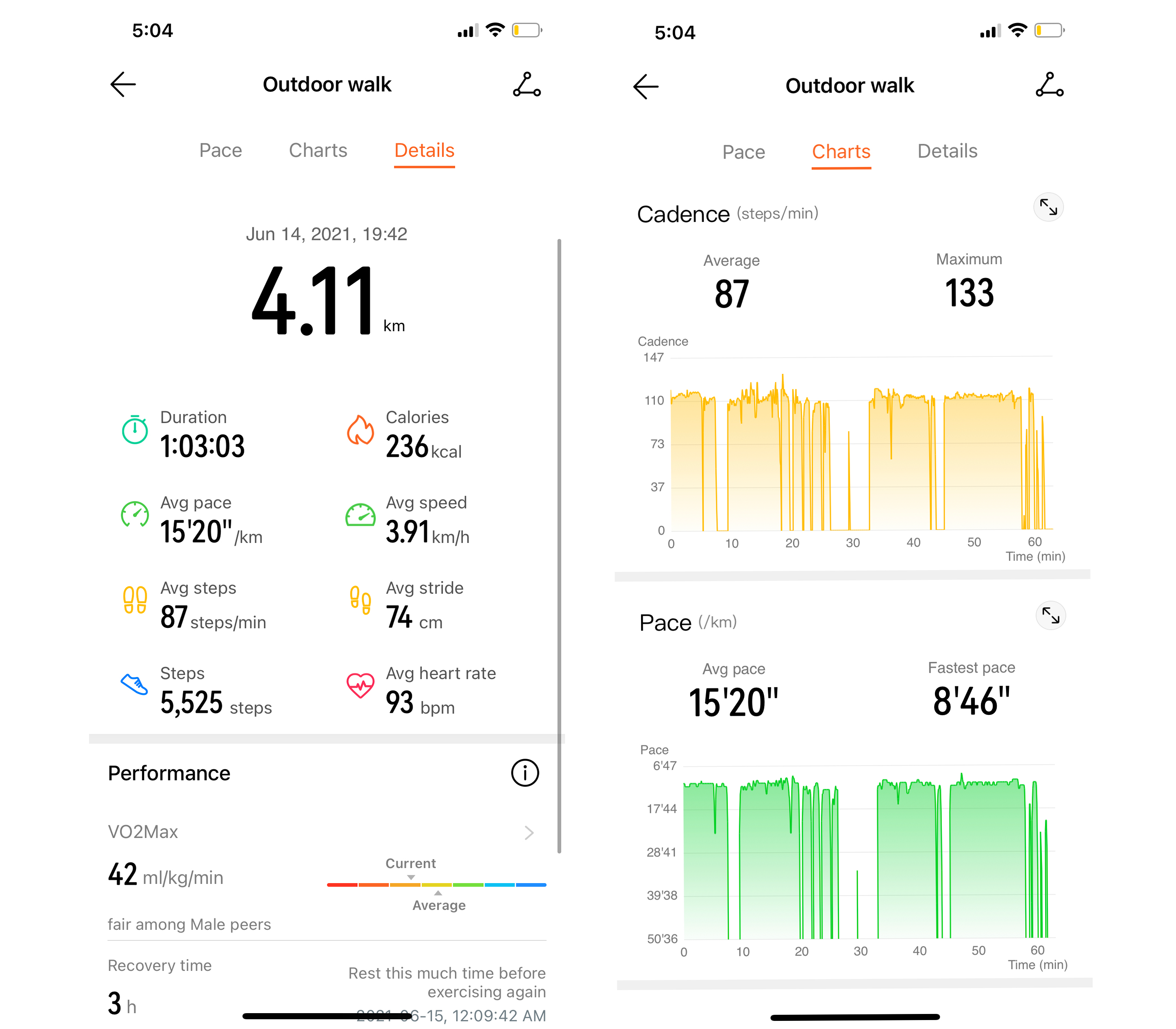 What you see the most on your watch is its face, and Huawei lets you choose from more than 100 watch faces available on the Watch Face Market.

Additionally, the Huawei Band 6 supports over 96 different training modes, though out of the box, running, walking, pool swimming, indoor cycling, jump-rope, and machine rowing are among the watch’s main workouts.

Smartwatches that continuously monitor blood oxygen levels throughout the day are rare, but the Huawei Band 6 can monitor your SpO2 levels in 30-minute intervals all day long. The results can be read directly on the tracker or its companion app.

On the app, the data is presented in an easy-to-read graph. All-day SpO2 monitoring is impressive, though unnecessary. Thankfully, it can be turned off in favour of manual checks, extending the tracker’s battery life. From my experience using the feature, the numbers seem to be accurate and line up with an actual finger pulse oximeter.

Though, it’s worth noting that Huawei’s health app says it’s “not designed to be a medical device and results should not be used for medical diagnosis or treatment.” 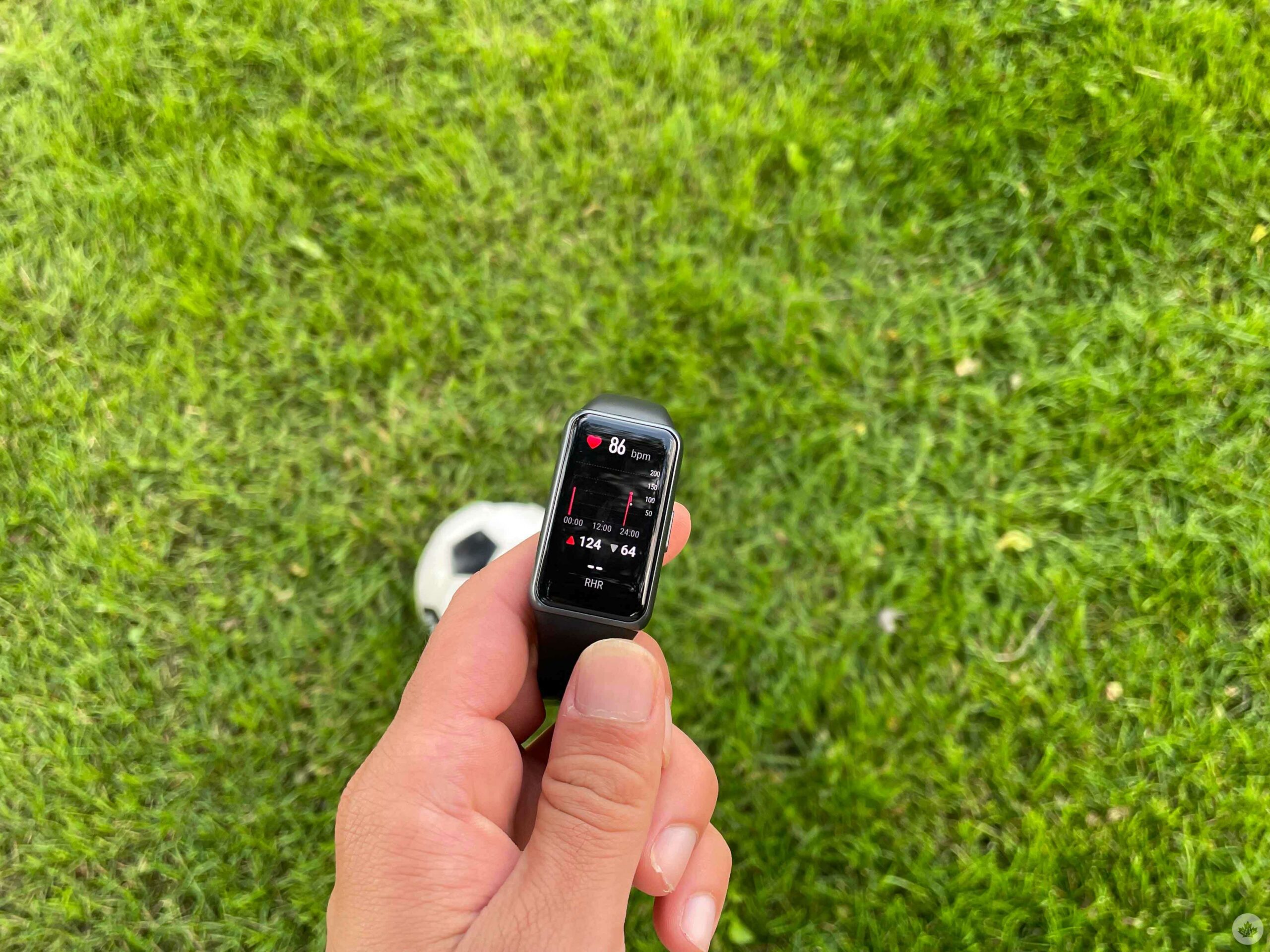 Similar to 24/7 SpO2 tracking, the watch can also monitor your heart rate throughout the day and alert you in case of any anomalies. The technology behind the monitoring is Huawei’s in-house TruSeen 4.0 heart rate sensor, which according to the company, is more accurate and energy-efficient than similar technologies used by other wearable makers.

Band 6 displays the results in an easy-to-read chart that shows your heart’s current BPM (beats per minute), the highest and lowest BPM of the day, along with your resting heart rate. Additionally, going into the companion app will allow you to access heart monitoring data from the past, which is displayed along with the date and time in well-organized graphs. 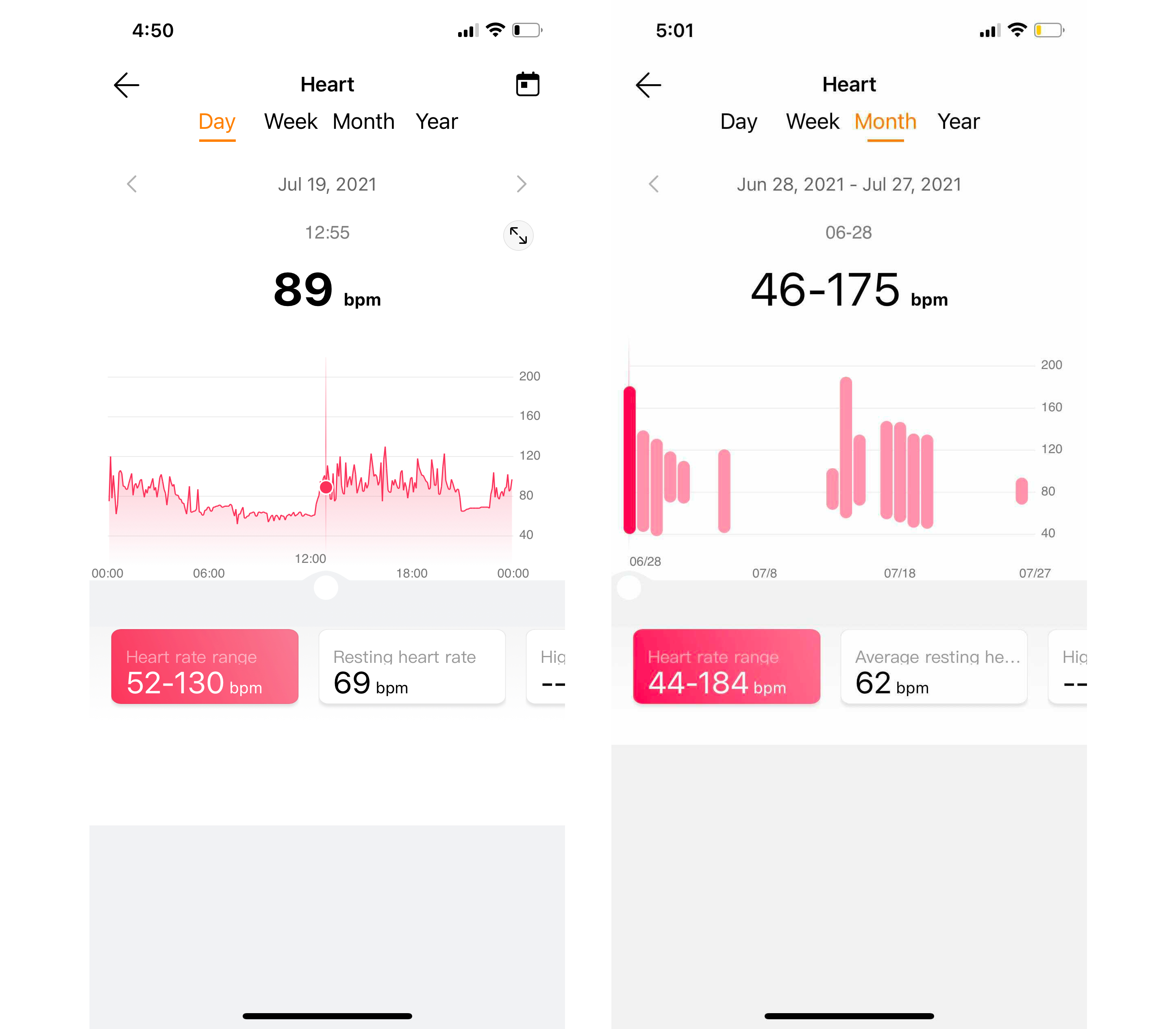 The Huawei Band 6 does an exemplary job when it comes to sleep tracking. To make the most of the feature, turn on sleep mode right before hitting the bed. Huawei’s TruSleep 2.0 technology detects different stages of sleep, real-time heart rate, breathing rate and uses this data to form a comprehensive analysis of your ZZZ time.

The Band 6’s sleep tracking doesn’t just count the number of hours you were sleeping. It also categorizes those hours and minutes into ‘Deep sleep,’ ‘Light sleep,’ ‘REM sleep’ and ‘Awake,’ and presents it in an organized graph, giving you a better understanding of why you might wake up groggy.

You’ll get a daily score based on your sleep quality, along with an explanation of why you got that number and how you might improve it.

The feature has pinpoint accuracy as it even listed when my sleep was interrupted, be it just for a few seconds. If you’re someone who’s having trouble sleeping or has intermittent intervals of wakefulness at night, the Huawei Band 6 is a solid tracker that can help you identify the issue and find ways to mend it.

The Huawei Band 6 monitors the stress levels of your heart rate throughout the day and displays the results on a graph that is further broken down into daily, weekly, monthly, and annual data. You’ll get a breakdown of your stress levels at various moments during the day, as well as an overall stress score each day.

According to Huawei, scores between 1-29 classify as relaxed, 30-59 classify as normal, anything between 60-79 is medium, and 80-99 is considered high. My score for the past week was 27, which sounds fine considering I mellow out every day.

If you’re someone who is battling with anxiety or high-stress levels, the Band will help you make a note of those moments and recommend built-in breathing exercises, which I think is a noteworthy addition.

All the features mentioned above work primarily in the background. This means that the fitness tracker needs a beefy battery, which the Band 6 thankfully includes. The tracker features a 180mAh battery that, according to Huawei, can last 14 days. In my testing, the battery only made it 10 days, but considering that I was testing the Band with brightness full at all times and multiple features running at once, 10 days is more than I can ask for.

“If integration with your smartphone is pivotal to your wearable experience, I would recommend you only buy this watch if you use an Android device.”

The wearable has a two-pin cradle that magnetically connects to the rear of the main body of the Band, making charging quick and easy. Additionally, it takes just under an hour for the battery to charge from zero to a hundred. If you’re short on time, a five to ten-minute charge can easily fuel up the Band to last you 2-3 days. 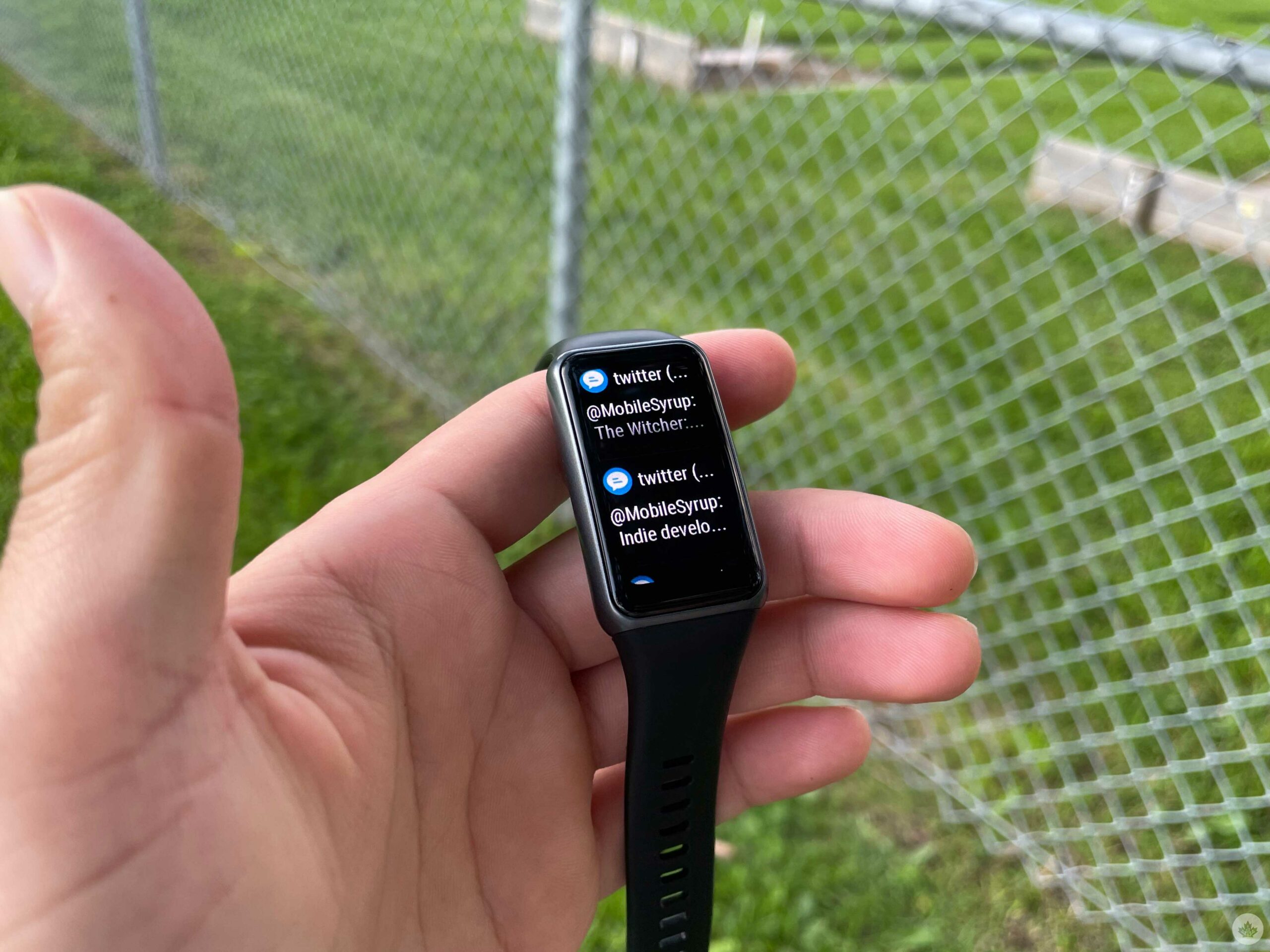 The Huawei Health app is a great companion to the Band 6 once you can get through the hurdle of pairing the devices.

After several re-installs and a few hours of trying to figure out why the Band wouldn’t pair with my Android phone, I came across a blog post that said, “try installing the Huawei Health app from the Huawei App Gallery,” and the rest is history. The Band paired with my phone on the first try. This is something Huawei should mention on either the packaging or on its product page. It’s worth noting that I didn’t have the pairing issue when using the Band with an iOS device.

The wearable did a speedy job of delivering notifications as soon as they arrived on my phone; however, I wish the Band supported notification interaction so that I could reply directly from the tracker without having to touch my phone. 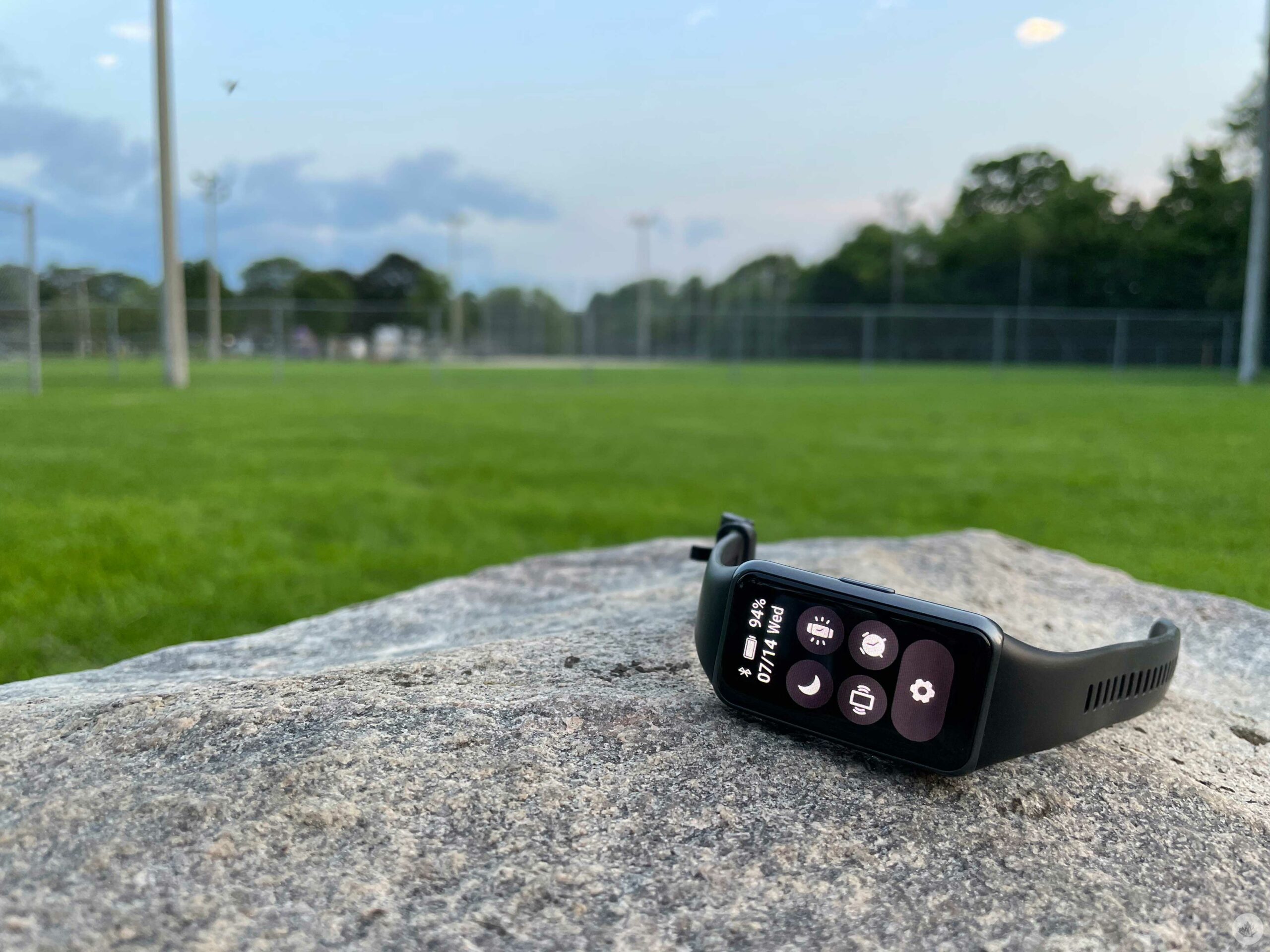 Huawei Band 6’s software is straightforward, and the fact that it doesn’t support third-party apps leads it to run smoothly without any noticeable lag.

It’s also worth noting that the Band itself doesn’t have GPS, so if you’re looking for routes while running, you’ll have to go into the Huawei Health app on your phone.

Additionally, some of the features that the Band offers when paired with the phone are only accessible on Android devices. For example, features such as music controls and camera remote control are not usable, or even present, when paired with an iOS device.

How to Shoot ‘Otherworldly’ Night Mode Shots on iPhone