Among Us Figures Show an Incredible Surge in Popularity

If you’ve been on the internet anytime in the past few months, you’re likely aware of Among Us. Honestly, before maybe two months ago, I honestly wasn’t even aware of the game. The fact that it started the surged to popularity in August, to essentially become the biggest thing in video games in September honestly made me think it was a new release from back in June or July. I then learned it’s been out for years. So yes, I suppose shame on me.

Right, the header states that Among Us is showing an incredible surge in popularity. The fact that it’s essentially one out of every three YouTube videos uploaded, or streams streamed (these numbers may not be correct) already highlight that fact. What is impressive are the sheer viewer numbers of the game. 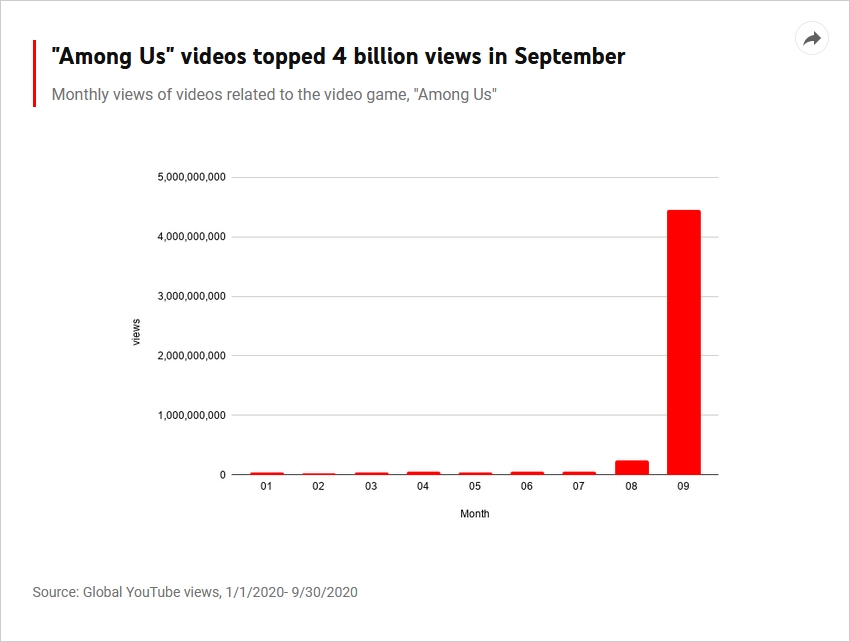 As you can see in the graph above, released with a report on YouTube’s Culture & Trends page, videos on YouTube related to Among Us have been viewed close to 4.5 billion times in September alone. This is a massive boost in August, where views seem fewer than 200 million. Prior to that, as the graph shows, the numbers are minuscule.

What this report also shows is the variety of videos on Among Us but also the ability to capitalise on creating videos about the game. On the variety, the report highlights that videos have included comedy skits, animations, songs, DIY projects, and even more. Videos of Among Us with the word ‘Animation’ in the title, for example, accounts for 7% of all videos.

As expected with every trend, people very quickly jump on the bandwagon. PewDiePie, whose first video on the game was on September the 9th, has quickly put out 11 videos around the game, accounting for 44% of his output since that first video. Not that one can blame him and other YouTubers and Streamers. Hornstromp Games, a channel with a little over 100k subscribers when they started making animation videos around Among Us on the 17th of September has seen a growth of 500k subscribers on the back of 14 videos.

What is fantastic about Among Us is the genuine global popularity. Much like Fall Guys, the popularity isn’t fixated on just one region or country. The US takes the single largest share of views at 18.7%, but Mexico isn’t far behind on 7.9%. South Korea comes in third at 6.4% but, interestingly, the report states that South Korea seems to have been ahead of the trend, creating videos around the game in July. 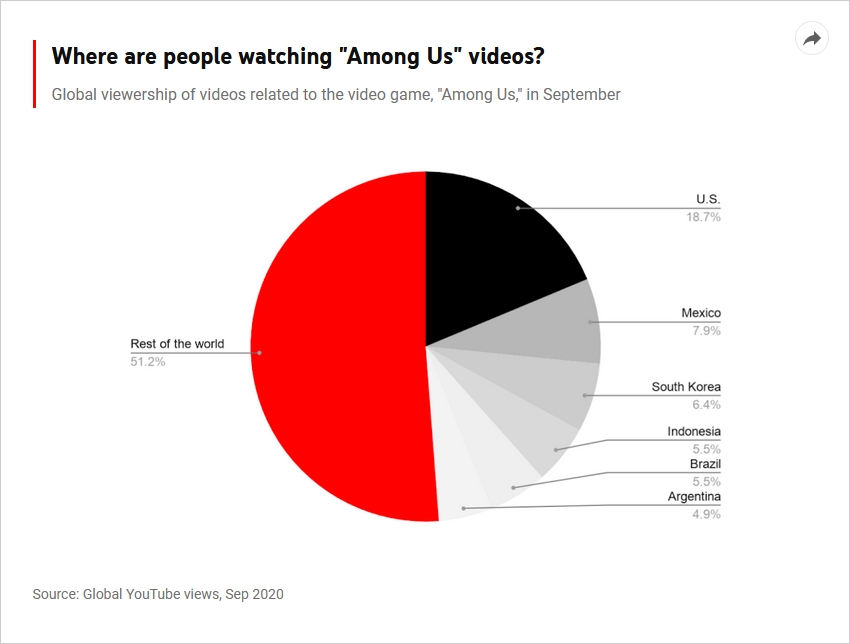 Why the popularity of titles like Among Us in recent times? Honestly, I find myself completely agreeing with the summary made on the report:

Among Us shares something in common with many of the year’s most-viewed video games. The game provides an opportunity for players to socialize with others online while remaining socially distanced, which would make it the latest in a line of “pandemic games,” a list which would include Animal Crossing: New Horizons and Fall Guys: Ultimate Knockout. All of these games fostered a sense of social connection during a year in which that was a little more difficult to come by.

Games have always been a way to bring people together and that’s why I’ll always push for inclusivity within the medium. The fact that the world is in what seems like a perpetual state of lockdown, it’s now more important than ever. Though, honestly, I likely can’t disagree with the assessment because I have yet to play the game. I have played Fall Guys though.