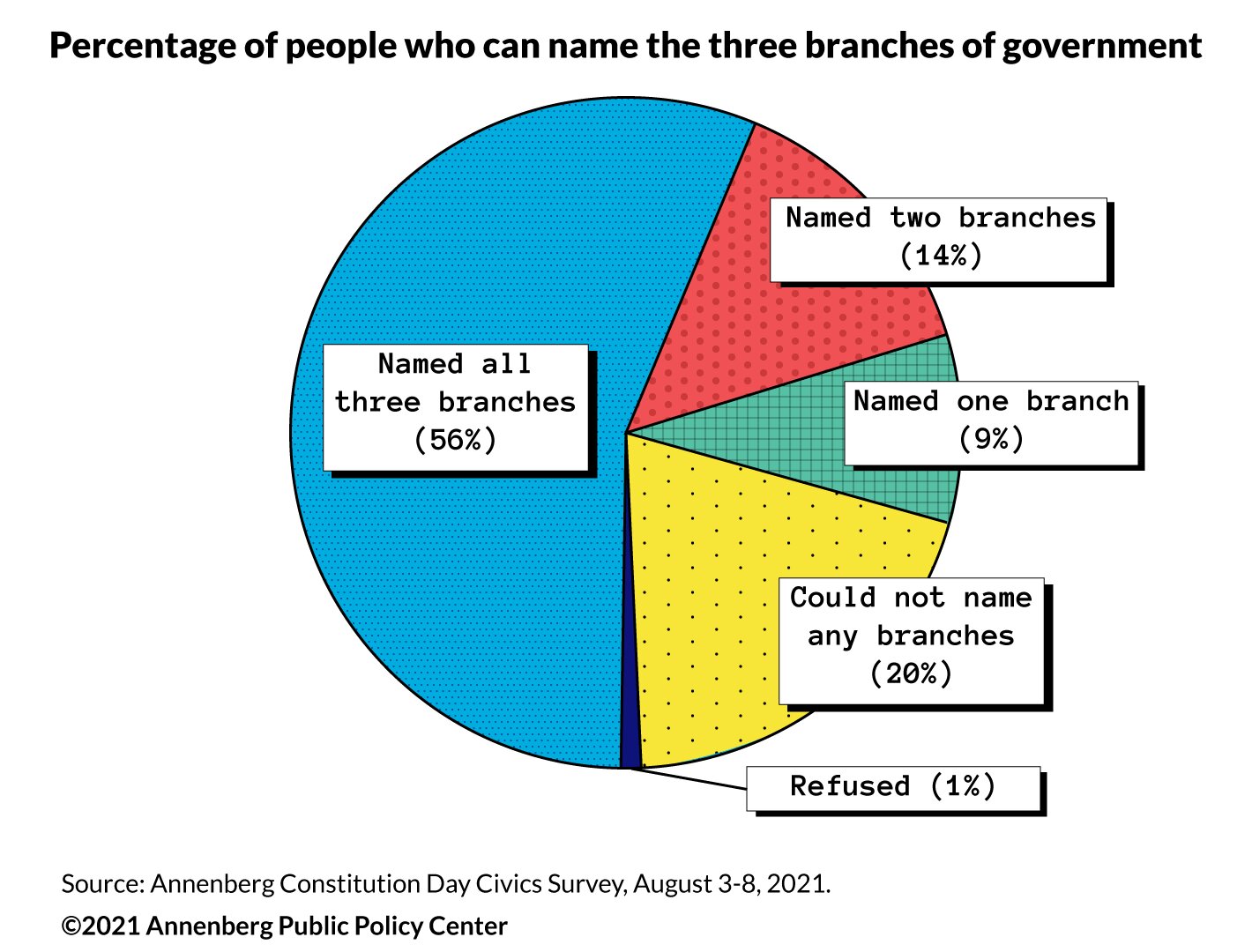 A growing number of Americans can name the branches of government and the freedoms under the First Amendment though many still misunderstand basic facts about how government works, according to the 2021 Annenberg Constitution Day Civics Survey.

The Annenberg Public Policy Center’s annual survey follows increased media coverage of the powers, functions, and prerogatives of the three branches in a year marked by an impeachment proceeding, a pandemic, a disputed election and unsuccessful efforts to overturn the results in the courts, an attempt to disrupt congressional certification of the electoral vote, protests over racial injustice and Covid-19 restrictions, and Supreme Court rulings on hotly debated issues like the Affordable Care Act.

“Higher proportions of the public have a foundational awareness of the three branches and the protections in the First Amendment,” said Kathleen Hall Jamieson, director of the Annenberg Public Policy Center of the University of Pennsylvania. “But this knowledge appears to have been purchased at a real cost. It was a contentious year in which the branches of government were stress-tested.”

The Annenberg Constitution Day Civics Survey is a nationally representative civics knowledge survey conducted annually in advance of Constitution Day (September 17) by the Annenberg Public Policy Center (APPC) of the University of Pennsylvania. The survey was conducted for APPC by SSRS, an independent research company, on August 3-8, 2021, among 1,007 U.S. adults. It has a margin of error of ± 3.8 percentage points. For more details, see the Appendix.

The three branches and how government works

Congressional terms of office: Just over 1 in 3 people knows how long the term of office is for a senator (35% correctly said six years) and a representative (36% correctly said two years).

The First Amendment: Asked to name the protections specified in the First Amendment, as many people or more could name most of the freedoms guaranteed by the First Amendment as were able to do so last year. Three-quarters (74%) named freedom of speech, statistically the same as in 2020 (73%). Freedom of religion was named by 56% (up from 47%), freedom of the press by 50% (up from 42%), and the right to petition the government by 20% (up from 14%).  Three in 10 (30%) mentioned the right of people peaceably to assemble, compared with 34% in 2020, when the survey was conducted during a summer of widespread protests.

Facebook blocked Donald Trump from its platform after January 6, 2021, on the grounds he was using the platform “to incite violent insurrection against a democratically elected government,” in the words of Facebook CEO Mark Zuckerberg.

The Capitol riot: Half of Americans (49%) said it was accurate to say that arresting those who entered the U.S. Capitol on January 6 to disrupt the certification of the presidential election violated the Constitution because they were exercising their constitutional right to petition the government for redress of grievances. An equal number (49%) said the statement was inaccurate, and arresting those who entered the Capitol did not violate the Constitution.

What’s driving this: Over half of self-identified conservatives (53%) and moderates (51%) said that arresting those who entered the Capitol violated their constitutional rights and 42% of self-described liberals agreed.

“It is a sad commentary on the public’s civic literacy that half of the public considers an effort to disrupt the certification of an election an exercise of a First Amendment right,” Jamieson noted.

An analysis found that taking a high school civics class continues to be associated with correct answers to civics knowledge questions, including knowledge of the three branches; knowledge of First Amendment rights; the term of a senator and representative; the meaning of a 5-4 Supreme Court decision; the Supreme Court having the final say on the constitutionality of the president’s actions; and knowing that Facebook is not covered by the First Amendment.

In 2021, nearly 6 in 10 (59%) respondents said they had taken a civics course in high school that focused on the Constitution or judicial system, about the same as in previous years we have asked this question. Half (48%) said they had taken a college course that focused on the U.S. system of government and the Constitution, more than in 2019 (38%) and earlier years.

The Annenberg Civics Knowledge Survey is released by APPC for Constitution Day, which celebrates the signing of the Constitution in 1787. APPC’s activities to enhance civics education include Annenberg Classroom, which offers free resources for teaching the Constitution, and the Civics Renewal Network, a coalition of more than 35 nonpartisan, nonprofit organizations seeking to raise the visibility of civics education by providing free, high-quality resources for teachers.

Amid pandemic and protests, Americans know much more about their rights

Provided by
Annenberg Public Policy Center of the University of Pennsylvania

Apex Legends’ tap-strafing nerf delayed due to “unexpected side effects”

Another Google Pixel Fold device could arrive with…