When we reviewed the $499 Nvidia GeForce RTX 3070, we called it the 1440p sweet spot. At that resolution, you don’t have to compromise on a single graphical setting in your games, similar to how the bigger $699 RTX 3080 doesn’t make you compromise at 4K. But today, we’re taking another look at the 3070 alongside its new competitor, the $579 AMD Radeon RX 6800 — because if you are willing to compromise, these two cards could transform your existing rig into a decent 4K machine.

That’s something I’ve been waiting for. Two years ago, I invested in a 4K OLED TV. It’s the most gorgeous screen in my house by far. I barely justified the $2,000 purchase by arguing my wife and I spend the majority of our free time planted on the couch. Secretly, I hoped it could double as a 4K monitor for my gaming PC as well.

But my secondhand GeForce GTX 1080 simply didn’t have the muscle to play recent games at 4K. Even though I’m generally the kind of penny-pinching gamer willing to sacrifice some eye candy for a smooth frame rate, my tweaks weren’t enough: only at the very lowest settings, with potato-grade textures, did new games look vaguely playable. At the time, the only card that could competently fix that was the GeForce RTX 2080 Ti, but I wasn’t about to spend another $1,000-plus when I was already two grand in the hole.

For roughly half that cost, I can now slot either of these cards into my five-year-old gaming PC and get a satisfying 4K experience in all but the most intensive games. I’m actually now toying with the idea of selling my PS5 to buy one of these instead.

So what you’re about to read isn’t a typical graphics card review. Instead, it’s a quick and dirty AMD Radeon RX 6800 versus Nvidia GeForce RTX 3070 shootout.

None of those prices matter unless you can actually find a card, of course, but roughly speaking: Nvidia’s $699 flagship RTX 3080 is the first no-compromise 4K gaming GPU, and today, my colleague Tom Warren’s review of the $649 Radeon RX 6800 XT shows that — for the first time in years — AMD can actually meet or beat Nvidia’s flagship, and for $50 less to boot.

If you’re the kind of person who’s building a brand-new PC specifically for gaming, you might want to seriously consider those flagship GPUs, particularly considering the gap between AMD’s two cards is just $70. But if you’re on a budget, only have room for a twin-slot card, and / or don’t have a 750-watt power supply (a consideration for small-form-factor PCs in particular, as there’s only a few mini-PSUs that powerful on the market), I think you’ll be pleasantly surprised by what the RX 6800 and RTX 3070 have to offer.

I slotted each of the cards into my existing gaming rig: an Ncase M1 mostly filled with aging parts, including an Intel Core i5-6600K overclocked to 4.4GHz, a Gigabyte Z170 mini-ITX motherboard, 32GB of fairly standard DDR4-2666 RAM, and a 700W SFX-L power supply. (Both AMD and Nvidia recommend a 650W PSU for these specific cards, which is still a lot.)

While the Ncase M1 is well-known for fitting a wide array of graphics cards despite its diminutive 12.7-liter frame, you might want to think about the RTX 3070 Founder’s Edition if you’re worried about a tighter fit. Not only is it a full inch shorter than the RX 6800 (9.5 inches versus 10.5 inches) and slightly slimmer, the Nvidia card is also a bit quieter under load — both in terms of the RX 6800 having a somewhat louder hum and audibly ramping its fan up and down a tad more often in the middle of a benchmark.

As far as heat’s concerned, it’s a toss-up: both GPU sensors measured 72 degrees Celsius in the middle of a looped benchmark. That’s good, particularly given AMD’s recent history of running hot. Otherwise, both designs seem fairly attractive to me, and I don’t mind AMD trading away one of its DisplayPorts for a monitor-capable USB-C connector instead. My aging PC build only has one USB-C port as it is, and I’d be happy to have one with 27W charging (as this does) for my phone or tablet. Each still has HDMI 2.1 and a pair of DisplayPorts and that’s good enough for me. 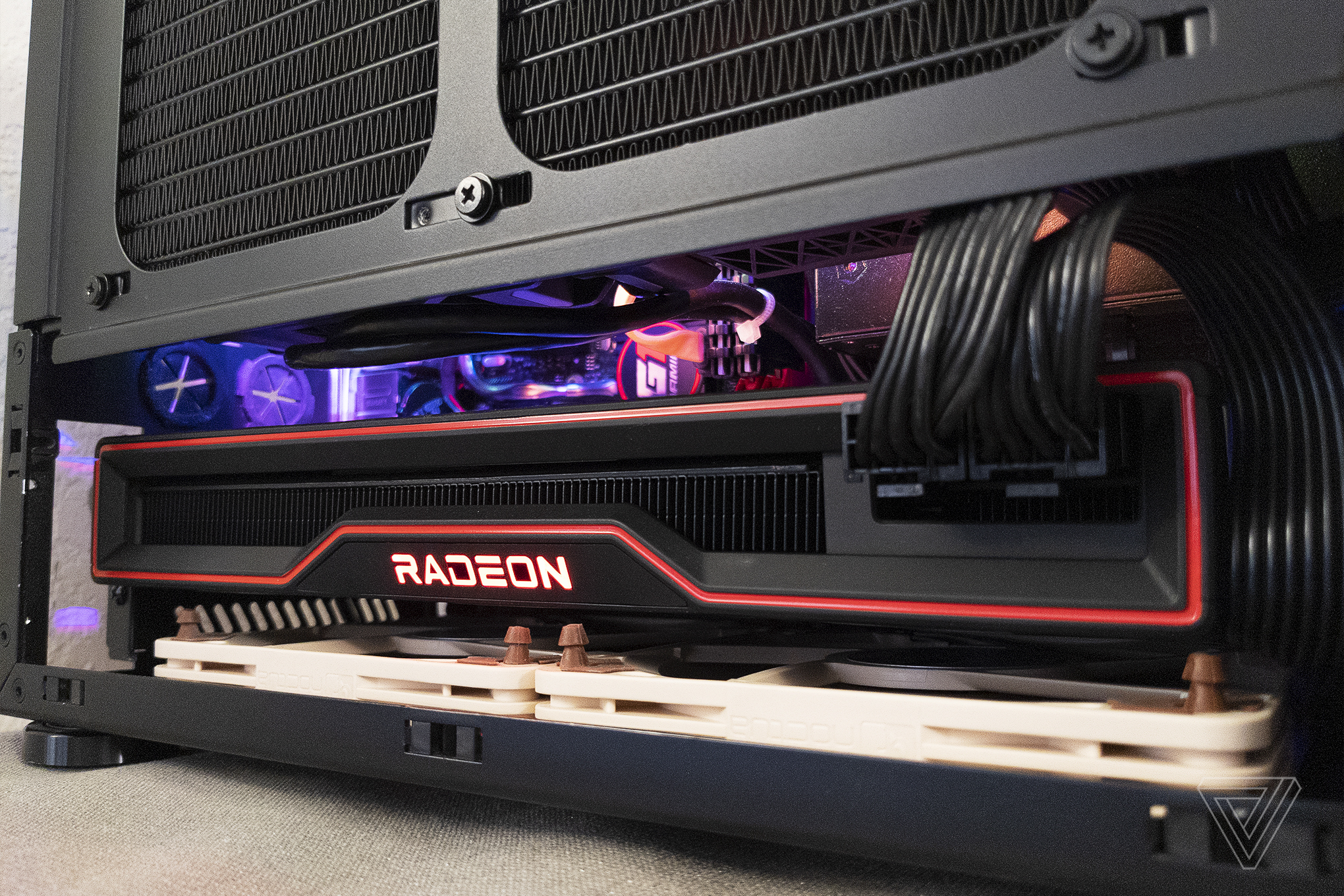 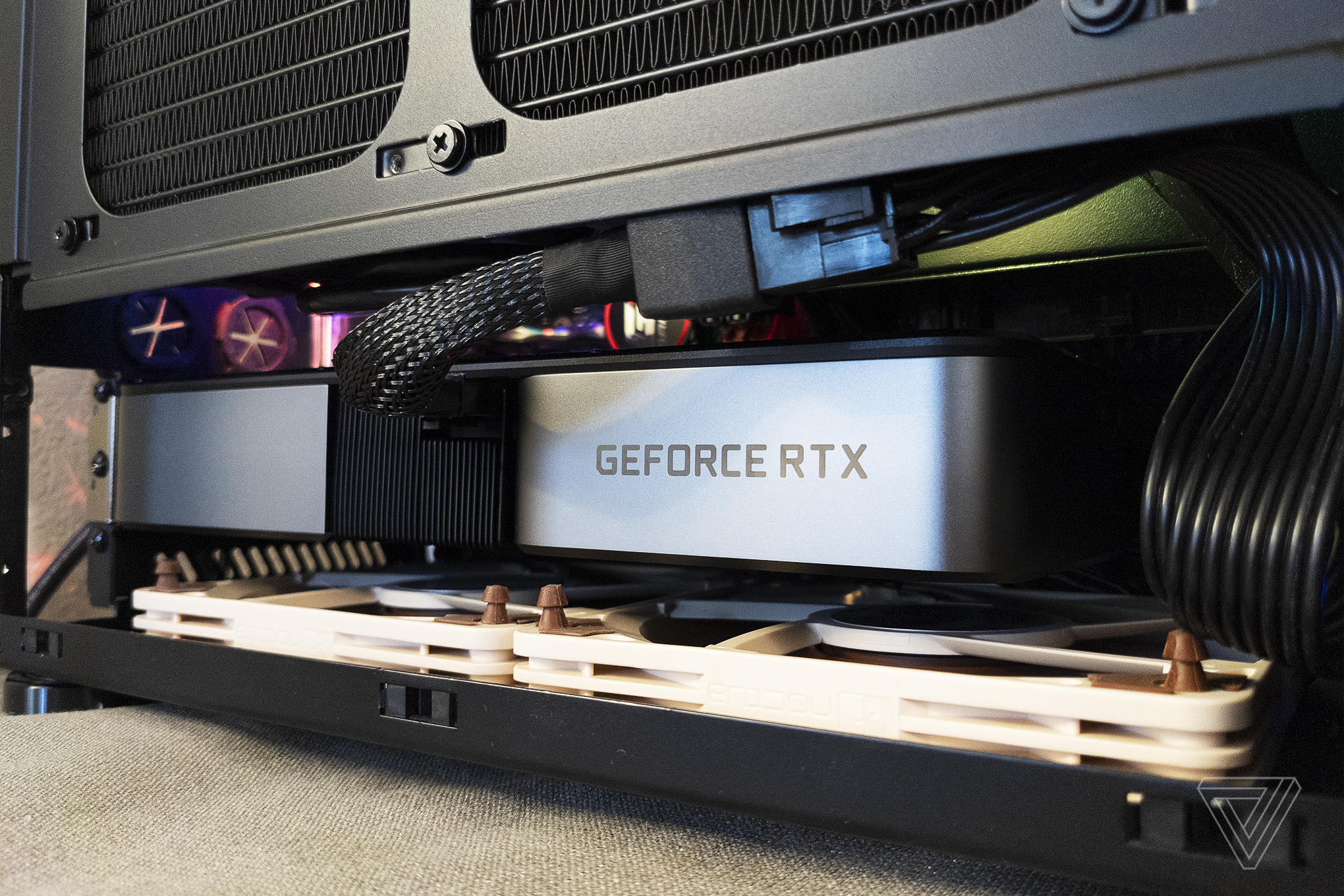 But in terms of performance, I’d pick the AMD card every time. Here’s an apples-to-apples performance comparison between both cards and my original GTX 1080, all at 4K resolution and maximum settings:

Not only does the Radeon RX 6800 offer double the frame rate of my GTX 1080 in practically every game, but it consistently beat Nvidia’s RTX 3070 in every title with ray tracing turned off. And if I’m being honest, I’ve yet to find a single game where the performance hit of ray tracing is worth it for either sub-$600 card. Ray tracing is barely noticeable in Call of Duty: Warzone, feels off-putting to me in Control, and while it adds some atmosphere to Metro Exodus and Shadow of the Tomb Raider, I wouldn’t trade it for the crispness of native 4K resolution.

And while Tom might tell you that Nvidia’s exclusive AI-upscaling DLSS technique can give you enough headroom with the 3070 to turn ray tracing on, I think it also depends on the size of your display. With a smaller 4K monitor, I might be satisfied with the AI-upscaled 1440p you get with DLSS… but native 4K looks far better at the seven-foot distance I sit from my 65-inch television.

It also doesn’t hurt that the AMD card has 16GB of video memory — Watch Dogs: Legion already more than maxes out the RTX 3070’s 8GB of VRAM at 4K ultra spec.

If you take a close look at my performance chart above, you may notice that some of those frame rates seem a bit too low to play. But after I took those apples-to-apples comparisons with all of the settings turned up, I went back to each game to find out how much I had to turn them down for comfortable 4K at (or near) 60fps. Frankly, I think this chart makes my choice even clearer:

In an older but capable desktop like mine, either of these cards can give you 4K, but AMD’s card can notch a setting or two higher in some of the more demanding games. Except for Microsoft Flight Simulator, of course, where my rig’s older 4-core, 4-thread CPU is probably holding it back.

Everyone’s a winner, but especially AMD

I’m willing to bet a lot of PC gamers are in the same boat as me: thinking about whether they should plunk down cash for a PS5 or Xbox Series X to get their 4K fix or upgrade their gaming PC. If you compare the list of GPUs as good or better than my GTX 1080 to the percentage of gamers who own them in the latest Steam Hardware Survey, as many as 85 percent don’t have the graphics card to do it today — but 80 percent have a quad-core CPU or better, and over 30 percent have a CPU clocked over 3GHz.

If you can find, afford, and power a $699 RTX 3080 or $649 RX 6800 XT, it could give your existing rig 4K performance in spades and a good deal of future-proofing too. But the existence of two less expensive cards that can do 4K with compromises might be an easier sell. There, I’d give a slight edge to the RX 6800, even though Nvidia’s 3070 has a lot going for it as well. For an $80 premium, I prefer the raw performance it offers, and it already seems clear its 16GB of video memory might come in handy.

But overall, I think everyone’s a winner here. Like Tom says, competition is great, particularly at a time when everyone’s at home gaming and the best gear is very hard to find. It’s fantastic that both AMD and Nvidia have GPUs that hit this hard under $600 once again, instead of AMD only being competitive with budget gaming GPUs and letting Nvidia dominate the high end.

I’m hoping that between these four cards and price points, you’ll actually be able to find one if you want one since pandemic demand doesn’t seem to be abating anytime soon. If not, Nvidia and AMD are sure to announce some midrange 1080p and 1440p GPUs that could spread that demand across a larger lineup.

Photography by Sean Hollister / The Verge