Alleged leaked Crytek documents suggest that the developer is planning or pitching several new titles, including a new Ryse installment alongside remasters of Crysis 2 and 3.

Last week, tons of internal files from Ubisoft and Crytek are said to have leaked, weighing in at roughly 700GB of data. As posted by Twitter user @Pokeprotos, the leaked Crytek documents mention the following projects: Crysis Next, Crysis VR, Hunt Mobile, Ryse Next, and Robinson 2.

At this point, the status of these mentioned projects are unclear. If the leak is legitimate, these projects could have been pitched, planned, or possibly, cancelled. In the documents, Crysis Next is being described as Crytek’s very own F2P Battle-Royale title with a very high production value. 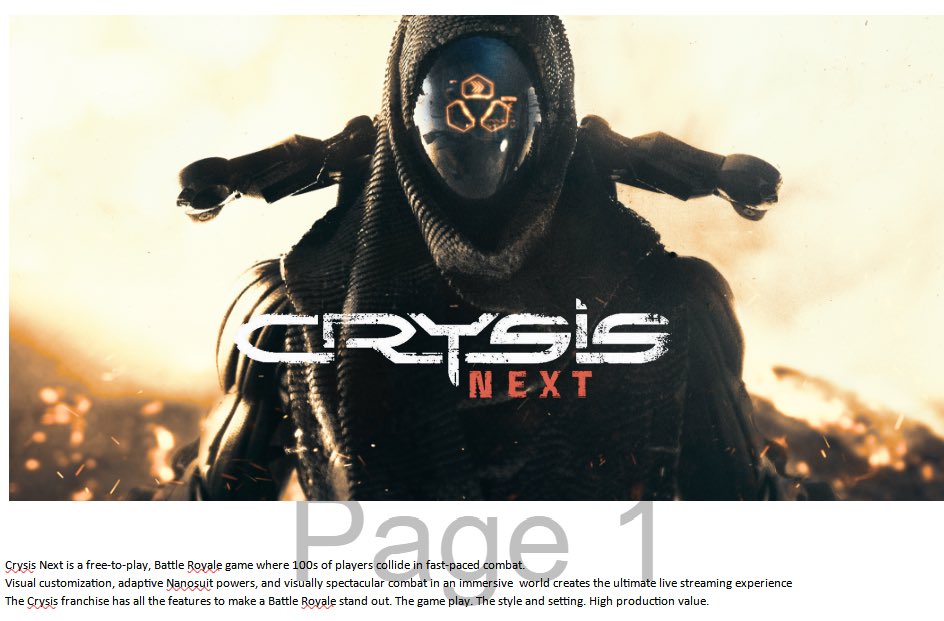 “A free to play battle-royale game where 100s of players collide in fast paced combat. Visual customization, adaptive nanosuit powers, and visually spectacular combat in an immersive world creates the ultimate live streaming experience. The Crysis franchise has all the features to make a battle royale stand out. The gameplay. The style and setting. High production value.”

Aside from this description, additional details about the projects mentioned above are absent.

Interestingly, Crytek also appears to be planning on releasing remasters of Crysis 2 and Crysis 3, giving earlier rumors more credibility. Crysis Remastered 2 has been mentioned with a release past August, although this has likely been the titles original release date. With Crysis Remastered having been delayed as well, the release date for the sequel is thought to have been pushed back as well. Crysis 3 Remastered has been listed for a release in February 2021 with a Remastered Collection releasing in May 2021.

As with all rumors, take the information with a fair pinch of salt for now. We’ll update as soon as we learn more about Crytek’s plans.

Complex turned its fashion and music festival into a futuristic video…