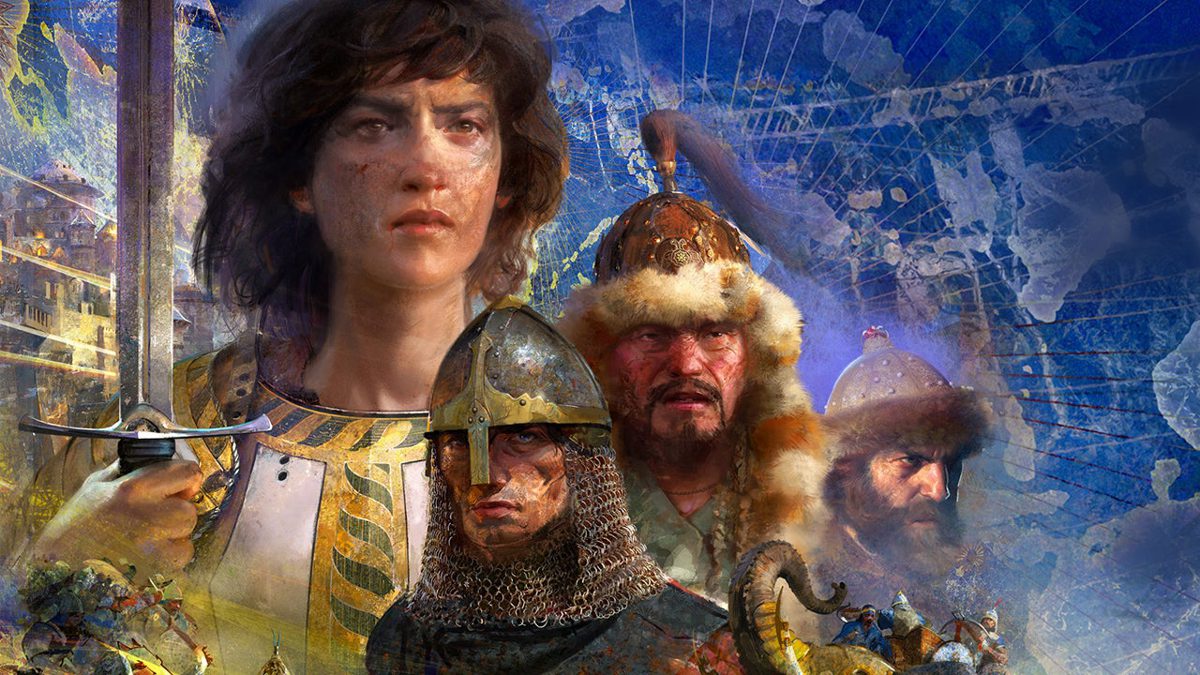 Age of Empires 4 is a base-building, sword-clashing, village-pillaging RTS of the classic style, inside and out. Jumping into a match as the tenacious English squaring off against the chivalrous French feels like being transported back – not only to its setting of the High and Late Middle Ages, but to a different era of strategy games entirely. And there are some things about that which feel really nice, like comfort food for gamers of a certain age. But it’s the few spots where Relic has taken risks here and there that this battlefield shows us its best and feels modern. Outside of that, it often just seems too careful and safe in a world where Age of Empires 2 Definitive Edition already exists.

If you’ve been sending villagers out to hunt animals, mine gold, and chop wood for decades like I have, you can slide right into the armored boots of most of Age 4’s factions with no real fuss at all. Winning pitched battles reliably requires knowing the rock-paper-scissors relationship between spears, horses, and bows. A quick raid to murder some of your opponent’s villagers and shut down their economy can be more strategically valuable than victory in any head-to-head engagement. Building walls and other defensive structures turns the late game into a tense chess match where map control is key, though eventually high-tech artillery like cannons will break the stalemate and lead to a decisive sweep for whoever fields them most effectively. The pacing is right where it needs to be when you’re against an evenly skilled opponent.

I was also impressed with the semi-randomized skirmish maps, which let you choose a biome – defining the colors, tree types, and overall vibes, from European Temperate to Asian Steppe to Taiga – in addition to a layout. They each present different tactical challenges, from two opposing ridges overlooking a valley that feels very much like a StarCraft 2 tournament map, to very open layouts with lots of unit-concealing forest in the middle that encourages a cheeky guerilla war and lots of misdirection. Some of them can feel a bit unbalanced, though; mountain passes will always favor castle-building civs over nomads like the Mongols, for instance. But overall, it’s a great variety of well-designed battlefields. And while I was worried naval combat would feel like an afterthought with how little Relic talked about it leading up to launch, it’s fairly well fleshed-out, making island maps a thrilling proposition of their own.

But for six out of the eight playable factions, I just didn’t feel like there was enough new going on here. I mean, they each do play a bit differently; unique techs, units, and landmarks are great at establishing an identity evoking their historical inspiration and varying up how you maximize your economy. The Chinese gain much of their gold income from Imperial Officials who walk around collecting taxes from all of your buildings. The Abbasids get the Baghdad House of Wisdom which positions them to be a leader in tech and – hilariously if you know its real-world fate – grants fire resistance to nearby structures.

But these modest touch-ups didn’t do much to change the fact that there’s almost nothing in Age 4 that couldn’t have existed 10 years ago. That includes the graphics: even on max settings they don’t look that impressive, especially when I could go play any Total War released since 2010 and see an order of magnitude more units with much more detailed models and far higher-fidelity environments. And with Microsoft signing the checks, it’s not like Relic made this on a shoestring budget. At the same time, new mechanical ideas like being able to hide units in forests to set up ambushes are a nice twist, but other than that I’m not really doing anything that I couldn’t in the Definitive Editions of Age of Empires 2 and 3 that have been released recently.

UNLESS… WAIT FOR IT… YOU ARE THE MONGOLS

With fully mobile bases, no population buildings, and an economy heavily focused on burning down other people’s stuff to get money, the Mongol faction breaks with tradition and convention and shows what Relic can do when it’s really trying to bring something new to the table. The Mongols took me from feeling kind of lukewarm about Age 4 to excited to explore new tactics almost immediately, and I’ve spent the majority of my multiplayer time since then throat singing and microing horse archers. The Rus are a nice breath of fresh air as well, though they’re not nearly as unconventional; they focus on dominating the wilds with smaller outposts rather than having a dense, heavily defended urban core.

The Mongols took me from feeling kind of lukewarm about Age 4 to excited to explore new tactics.

Unfortunately, not even Genghis Khan could save me from the generally terrible unit pathfinding and targeting. It’s not StarCraft: Brood War bad, but it’s pretty bad, with cavalry commonly getting stuck on rubble and dancing back and forth nonsensically, scouts trying to ride through a forest instead of around it, knights trying to surround and gang up on one spearman instead of breaking off to hit the siege weapons behind him, and archers stopping to plink away ineffectually at a tower when there’s a pivotal battle going on just a short jog up the road. You are going to need to babysit your armies constantly, on a very fine, tactical level, to get the best out of them. And that’s true even when you’re not playing a super micro-heavy faction like the Mongols.

But there’s one area where Age 4’s old-school sensibilities brought me nothing but delight: It features a full 40 missions of single-player campaign goodness. The first two campaigns, featuring the English vs the French in the Norman Invasions, and then the French vs the English in the Hundred Years War, are a bit slow due to the fact that they focus on the two most boring factions – they could almost be mistaken at times for mirrors of each other. But the Mongol Empire and Rise of Moscow campaigns feature tons of interesting objectives that put you in the middle of thrilling flashpoints from history. You’ll unlock live-action mini documentaries for each scenario on things like how to build a composite bow or traditional Mongol folk music, which are pretty neat – though I would have killed for basic pause and rewind buttons as they played.

It’s worth highlighting that the music and sound design are great across the board. Traditional instruments and melodies evoking the spirit of each faction start out simple and build to something more epic as you advance through the ages. Voice lines for each unit were recorded in the native languages of their historical cultures, including some that are no longer natively spoken. The English units, for example, speak mostly incomprehensible Old English in the first age, which gradually evolves through Middle English and eventually arrives at the Early Modern English of Shakespeare’s time. This was a really nice touch, and none of it sounds overly stereotypical or cartoonish.

On the other hand, maybe my biggest disappointment so far is the lack of a map editor. One of my favorite activities in older Age of Empires games has always been designing my own scenarios and sharing them with my friends, and right now you can’t do it here. Fortunately, Relic says mod tools are on the way – I just hope they don’t take too long to get here.

Age of Empires 4 plays it safe a bit too often, but really excels when it wanders outside of its very traditional comfort zone. The expansive campaigns and offbeat factions like the Mongols and the Rus are major highlights, even when it loses some of its sharpness to a small unit cap, frustrating pathfinding, and relatively unimpressive graphics for a 2021 game. I’ve been enjoying it a lot as a whole, but it also sometimes makes me question how much room I have in my life for this age-old formula these days, when real-time strategy has come such a long way thanks to the innovations of other franchises.

Apple iOS 15.1 releasing today with new features: Everything you need to know