Activision Blizzard (NASDAQ:ATVI) have released their earnings for the quarter ending June 30, 2020, and much like competitors Electronic Arts, the company has benefitted greatly from the COVID-19 pandemic as their customers stay home and engage with live-service money-makers like Call of Duty and World of Warcraft. Acti-Blizz delivered $1.93 billion in net revenue in Q2 (their fiscal year coincides with the regular calendar year), which is way up from $1.4 billion made in Q2 2019. In fact, this was Acti-Blizz’s best Q2 in company history. Q2 net income was $580 million, up from $328 million a year ago. Earnings per share were $0.75 for Q2, or around 17 cents above forecasts. Despite across-the-board good news, Activision Blizzard stock is still slightly down in after-hours trading as investors were perhaps expecting even more glowing results. 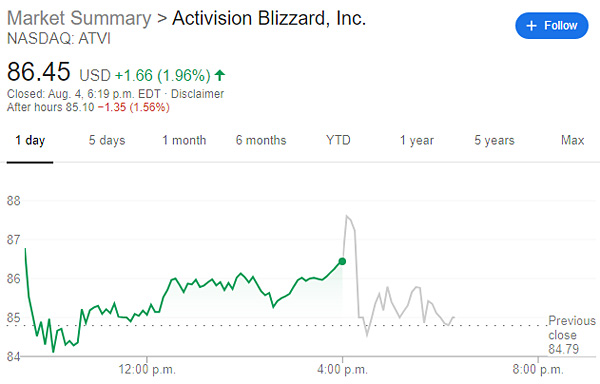 Call of Duty: Warzone Will Evolve and Be Tied to Future CoD Games Confirms Infinity Ward

Call of Duty Levels Up

To the shock of no one, Call of Duty was the main thing driving Activision’s success in Q2 2020, particularly the massive success of Call of Duty: Warzone. The free-to-play CoD battle royale game has accumulated over 75 million players to date, boosting Acti-Blizz’s overall MAUs (monthly active users) to over 400 million. Overall, engagement in the Call of Duty franchise was up a whopping 8x over Q2 2019, and a significant portion of those who play Warzone are upgrading to the premium Call of Duty: Modern Warfare, with the CoD franchise moving more copies in Q2 than any other non-launch quarter in history.

Obviously, the Call of Duty money train isn’t coming to a stop any time soon. Acti-Blizz once again confirmed a new premium Call of Duty from Treyarch and Raven Software (strongly rumored to be Call of Duty: Black Ops Cold War) will launch this year and Warzone will be receiving a major of infusion of fresh content based on the new game.

Call of Duty isn’t the only property benefitting from the pandemic – Blizzard, which has been struggling in recent years, saw a major boost in World of Warcraft engagement during Q2. Blizzard brought in $461 million in net revenue during the quarter, a very good result by recent standards, and WoW engagement is said to be higher than its been in a decade as Blizzard prepares to launch the big Shadowlands expansion of and new WoW Classic content. Of course, people being trapped at home with nothing to do has also been of benefit to Acti-Blizz’s King mobile division, which milked Candy Crush for $553 this quarter. 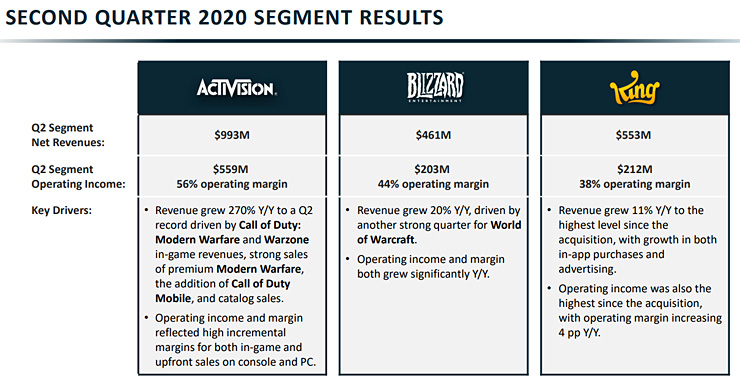 While the effects of COVID-19 may tail off somewhat in Q3, its effects should be strongly felt for some time to come, and again, Call of Duty is an absolute juggernaut right now. In addition to the new premium Call of Duty, Warzone content, and WoW Shadowlands expansion, Acti-Blizz also plans to release the nostalgia-tweaking titles Tony Hawk’s Pro Skater 1 and 2 and Crash Bandicoot 4: It’s About Time this year, which should both do well. As such, Activision Blizzard has boosted their full year 2020 outlook again to $7.28 billion (up from the $6.8 billion they anticipated during their last earnings report and the $6.45 the expected at the beginning of the year).

Looking more long-term, Acti-Blizz have also vowed to apply their new Call of Duty model, in which they support multiple interconnected yet separate titles at once, to some of their other major franchises. They’ve already announced the Crash series is jumping to mobile, and who knows what could be done with franchises like World of Warcraft or Overwatch? While Activision Blizzard CEO Bobby Kotick warns about COVID-19-related volatility, it seems like he’s rightfully confident about the future of the company…

Our mission to connect and engage the world through epic entertainment has never been more meaningful. Our 400 million players continue to experience fun, joy and accomplishment through our games. Our record engagement resulted in greater revenue and earnings per share than previously forecast. While economic uncertainty could have an impact on our near-term results, the initiatives that drove our growth for the first half of the year should also provide the foundation for long-term growth.

Many thought Call of Duty couldn’t get any bigger, but Activision Blizzard have someone levelled-up the franchise yet again. If they can pull off a similar trick with their other big series, the publisher’s future is looking very lucrative indeed.

Microsoft Confirms DualShock 4 Can Be Used For xCloud