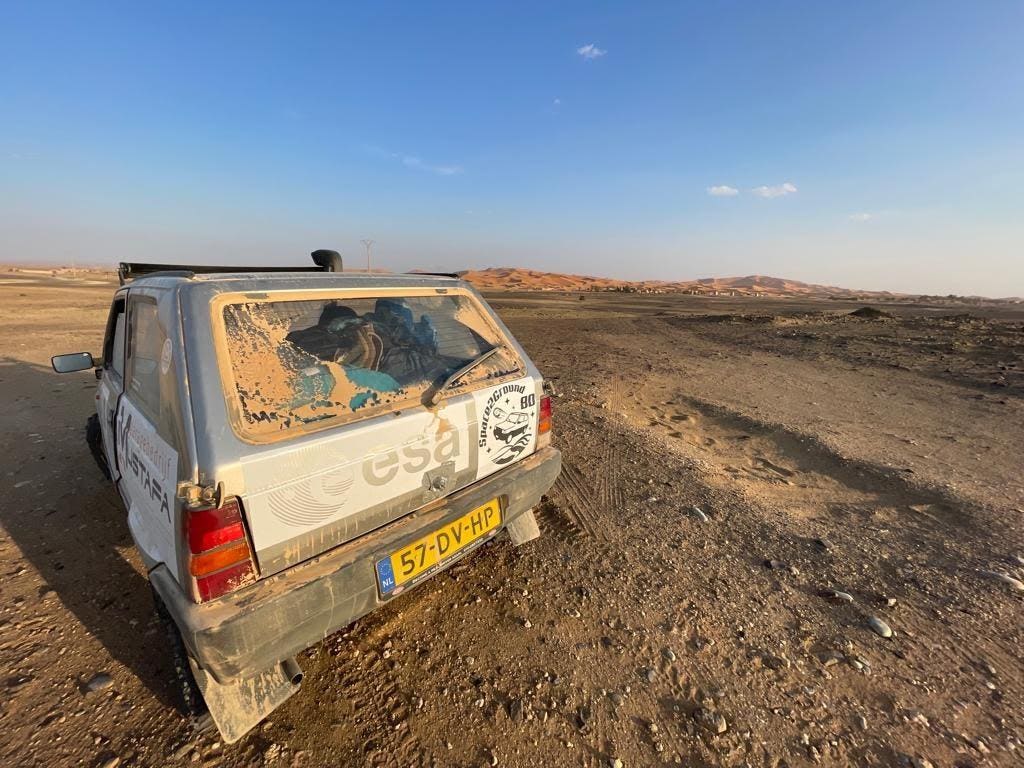 At first glance, it’s hard to see what a secondhand hatchback Fiat Panda was doing in the Sahara desert after two decades already of service.

But two engineers from the European Space Agency (ESA) saw a unique opportunity to practice what people often love to do when working in spaceflight: simulations. In perhaps the ultimate long-drive analog, the Fiat completed a nearly 1,900-mile trek in 2021 as part of the Panda Raid, and it’s set to quintuple that mark very soon.

In a year’s time, the first-generation Fiat will run 10,000 miles from Europe to the Mongolian steppes as a part of the Mongol Rally, which is something like driving across the United States coast-to-coast three times.

As if that’s not grueling enough, the two engineers said in a statement that they plan to carry space tech with them to see how it performs. “We love space and our day jobs, so are currently in contact with various ESA projects about work we might do to help them,” small satellite specialist Cesar Bernal said in the statement.

Packed somewhere in that car will be a suite of space information to see how well space systems perform when tracking an item (in this case, the Panda) across long distances. Satellite navigation receivers will assess GPS and Galileo (the European navigation system) to see their performance across wide geographic spans.

“We’ll be moving across wildly varied landscapes, from built-up urban centres to more isolated mountainous or desert regions, and down to lower latitudes as well,” software engineer Javier Fernandez, the other participant, said in the same statement.

And that’s not all, as the tiny car will also store likely items such as georeferenced soil samples to calibrate the observations of Earth-gazing satellites, some onboard computer systems, and other test boards or sensors. Even Internet of Things technology won’t be left out, as the engineers seek how accurate such tracking systems are for applications like shipping containers.

“It will be a bumpy, dusty ride, experiencing extremes of temperature, so our trip will be a good test of general robustness” for these various computers, sensors and other hardware, noted Cesar.

The lessons learned from navigation may also help serve as a proving ground for astronauts operating on the moon and Mars, where GPS is not a thing at the moment (although that will likely change as modern satellite systems are built for those environments.)

“Navigation is based around a road book rather than a map, listing a sequence of landmarks we had to follow each day. We got lost on a couple of occasions, finding ourselves completely surrounded by towering dunes and not seeing any other cars,” Cesar said, but noted all participants had backup as the Saharan organizers were tracking them remotely for safety reasons.

Happily, only one major mechanical malfunction occurred last time. “The car filled up with steam and smoke, which seemed bad, but was just a failed fuse in the cooling fan,” Javier said.

It’s likely that the team will once again do their run for charity. Back in 2021, they raised money for ESA’s Humanitarian Relief Fund, which you can learn more about here.

Denial of responsibility! TechCodex is an automatic aggregator of the all world’s media. In each content, the hyperlink to the primary source is specified. All trademarks belong to their rightful owners, all materials to their authors. If you are the owner of the content and do not want us to publish your materials, please contact us by email – [email protected]. The content will be deleted within 24 hours.
european space agencyfiatFiat PandaJavier FernandezMongol Rally
0
Share

‘Minecraft’ online bans will soon apply to all multiplayer servers

Samsung Galaxy S22 FE: Everything we know so far