A Quick Hands-On With The DualSense PS5 Controller

It’s October 30th and that means some retailers have started selling the PlayStation 5 accessories nearly two weeks ahead of the console launch. Thanks to a quick venture to our local Best Buy today, we were able to secure one of Sony’s newest controllers before they have a chance to sell out. As we don’t have a PlayStation 5 unit in the office, this means we weren’t able to check out the full range of new features on the DualSense controller. So, instead, we wanted to take a quick moment to test out the controller across other devices in our office and see if we could put this $69.99 controller to use instead of letting it rest as a fancy paperweight until November 12th.

The DualSense still adopts a wider stance than the Xbox Series X controller, with an easy grip that won’t see the user’s thumbs bump into each other when operating both analog sticks simultaneously. The textured grip to the controller that you can see in detailed pictures above isn’t nearly as pronounced as on the Xbox Series X controller to the point that you won’t even notice it’s there unless you accidentally scratch your fingernails or wedding ring against it. Both the d-pad and face buttons have a high gloss finish, but don’t let that fool you: these buttons have a polymer coating that helps grip your fingers from sliding off. Both the triggers and L1/R1 buttons feature another minimalistic grip that helps your fingers stay in place without sliding off but otherwise not offering much resistance. As you pull down the R2, your finger will catch on the raised lip at the edge of the button although the lip isn’t as pronounced as the DualShock 4 controller was. I’m eager to get a chance to check out the haptic triggers and audio features on the DualSense, but that will have to wait for final retail PS5 hardware to get the full experience.

I unfortunately could not get the controller to be recognized by the PlayStation 4 with any of the USB Type-C cables that I had around the office. Pairing through the standard Bluetooth method (Create button + Home button) would get the DualSense recognized as an eligible Bluetooth device and show up as ‘Wireless Controller’. Unfortunately, the DualSense would not respond to any input after connecting. 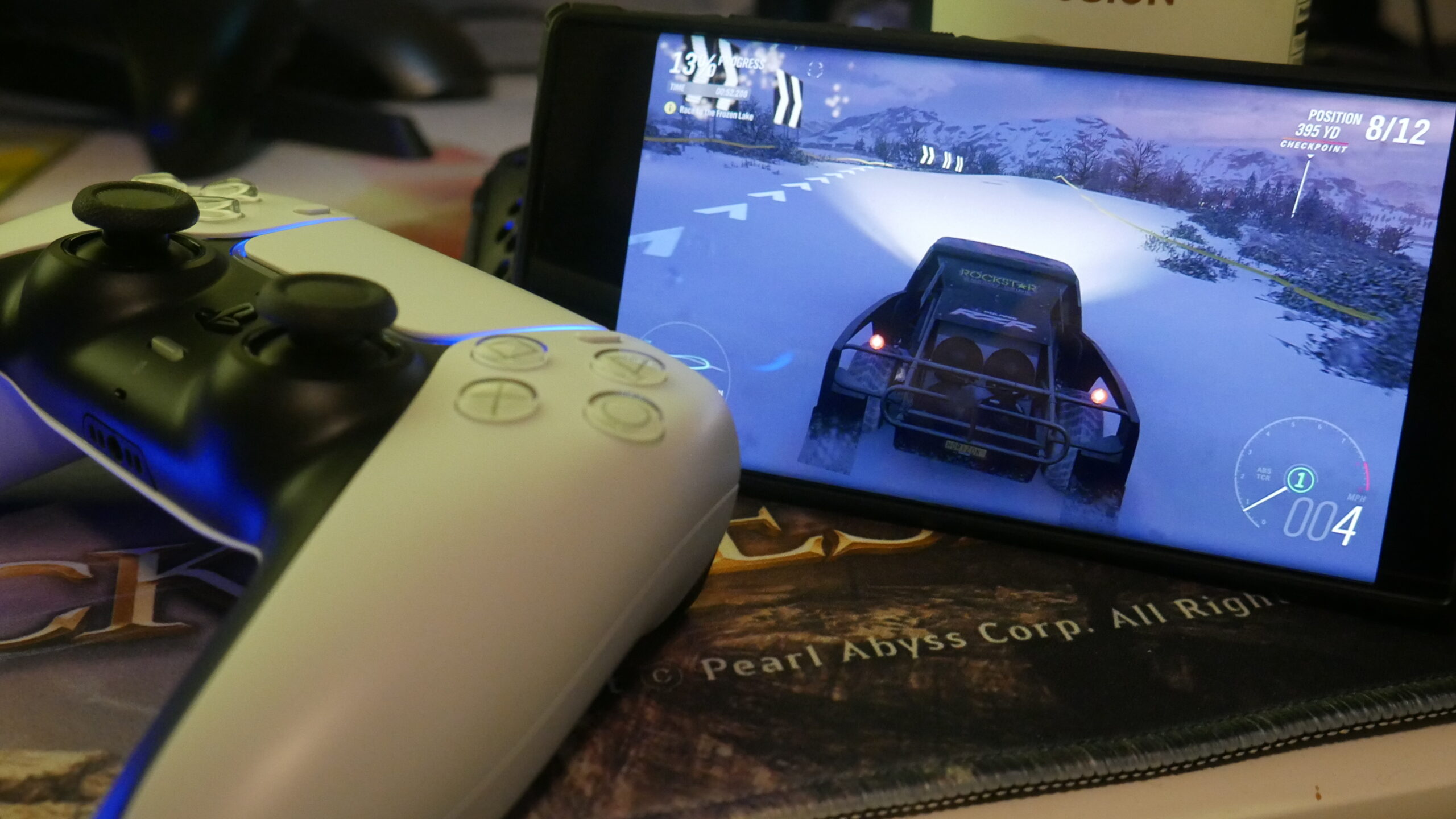 PS5 DualSense Controller and Other Accessories Launching Before the Console Itself

This was my first successful platform with the DualSense controller. After pairing it via Bluetooth, it reacted how I expected it to. I could navigate around the home screen on my Galaxy Note 20 Ultra and open up applications. PlayStation 4 Remote Play would connect to my PlayStation 4 console but, just as it did when I attempted to use it natively on the PS4 console, it would not respond. I could still use touch controls, so I knew that the remote play app was still responsive.

Interestingly, the controller worked for Xbox Game Pass streaming and I was able to load up Forza Horizon with minimal effort. The button arrangements for the DualSense were quite screwed up compared to what you would expect. The bumpers and triggers were swapped, Square would act as the A button, Cross as the B button, and so forth. However, Forza Horizon 4 has a very generous remapping option and after changing the controls around to what I would expect the PlayStation layout to represent, I was able to play this streaming title without issues. Not quite plug-and-play but for an initial attempt on mobile phones, I’d say it’s serviceable. Just expect to take some time to reconfigure the controller to your liking.

This is where I experienced a similar result as with my Android phone: the controller would pair (in this case, wired via USB Type-C) to my PC and be recognized as ‘Wireless Controller’. Again, buttons would be strangely rearranged on PC. When I loaded up Disc Room, the touchpad button would register as D-Pad Down. All of the buttons would light up in the controller config and dead zones were fairly accurate. Jumping into Steam Big Picture and setting the DualSense as a PlayStation 4 Controller fixed just about all of these issues. I attempted to use the DualSense in Call of Duty Modern Warfare and could not get the controller to be recognized.

Long story short: the DualSense PlayStation 5 controller will work on PC at the moment but be prepared to spend some extra time configuring it to your own liking (and to register the proper inputs). With the low-latency Bluetooth support on the DualSense controller, you’re able to use this controller as both a wired and wireless unit depending on personal preference

The DualSense controller for PlayStation 5, as well as the other Sony-branded accessories, are starting to make their way to retail channels ahead of the consoles launch next month. If you’re in North America, you can purchase the DualSense controller through major retailer chains such as Best Buy as well as Amazon and get the controller secured ahead of the console launch. The PlayStation 5 will launch in North America, Japan, South Korea, New Zealand and Australia on November 12th with the rest of the world seeing a staggered launch a week later on November 19th.

Amazon app quiz December 1, 2020: Get answers to these five questions…

Bitcoin Jumps to All-Time High of Over $19,800 Amid Increased Demand