A potential gamechanger for future of sustainable materials 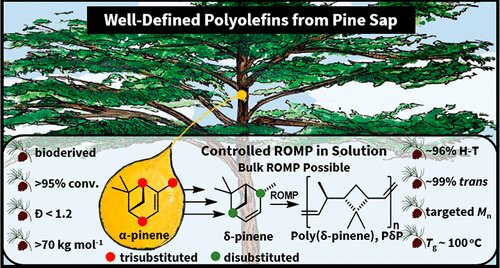 Over the past 100 years, plastics and polymers have changed the way the world operates, from airplanes and automobiles to computers and cell phones—nearly all of which are composed of fossil fuel-based compounds. A Florida State University research team’s discovery of a new plastic derived from pine sap has the potential to be a gamechanger for new sustainable materials.

Associate Professor of Chemistry and Biochemistry Justin Kennemur, the principal investigator on the study detailing the new discovery, said this was a significant step in the right direction for new plastics and is a gateway discovery that could lead to several new materials.

“What we know currently is this glassy, thermally stable plastic can be melted and shaped at a higher temperature and cools into a hard plastic at ambient temperatures,” Kennemur said. “One of the next goals is to learn some of the mechanical properties of these polymers. However, this material has many structural features that mirror the plastics we use every day, so there is promise for a multitude of applications.”

The team’s findings were published in the journal ACS Macro Letters.

“Ninety-nine percent of plastics today are produced from finite fossil fuels with increasing demand and limited geographic availability,” he said. “Producing materials from renewable resources, and particularly pine sap, which may be harvested without killing the tree, is a noteworthy effort.”

Alpha-pinene, the most abundant molecule produced from pine sap, is notoriously difficult to turn into plastics so it currently has limited uses. It’s primarily found in turpentine-based cleaners and solvents. Mark Yarolimek, an FSU doctoral student in polymer chemistry who led the study, first synthetically modified the alpha-pinene to make the compound known as delta-pinene.

Yarolimek and Heather Bookbinder, who served as an undergraduate researcher on the project before graduating with a bachelor’s in exercise physiology in 2020, then performed a range of “polymerizations”—chemical reactions to transform small liquid molecules into solid macromolecules—to test how effective this molecule was at becoming a plastic.

These tests included measuring how much delta-pinene was converted to plastic in a single reaction, how well the researchers could control molecule growth, and how condition variability affected the materials. They also characterized the various material properties of the plastic, such as what temperature at which the polymer melts and how much heat it can withstand before it decomposes, as well as exploring the materials’ molecular structure.

Brianna Coia, a graduate researcher in the Kennemur Group, simultaneously analyzed the delta-pinene to understand if it possessed the proper thermodynamic properties to undergo polymerization. With resources from the FSU Research Computing Center, Coia performed density functional theory calculations, and her computational results paralleled well Yarolimek and Bookbinder’s experimental findings.

Yarolimek said converting such biomass molecules into new high-performance plastics, like this one, is essential to continuing our way of life. The team has already worked with the FSU Office of Commercialization to file a patent for the material they discovered.

“Instead of regressing to the 18th century when petroleum runs out, the switch to biobased plastics will allow us to push further forward into what comes next,” he said.

Making new biobased plastics is only half of the conversation—the other involves the ultimate fate of the plastic, Kennemur said. For this high-performance material, having a short shelf life from being biodegradable would be undesirable, but it still needs a way to be recycled. That may mean developing decomposition processes via a chemical stimulus.

“Our research is invested in both. We make new materials, but we are also investigating their chemical recyclability,” he said. “We made this new plastic, but this is just the beginning. We need to also learn how to unmake the plastic and we have plans to start investigating that.”

Kennemur said his student researchers largely deserve the credit for the discovery while his role was to guide their efforts.

“Being a part of this research team was probably one of the most educational and interesting experiences I had during my time at FSU,” Bookbinder said. “In my opinion, hands-on experience is the most engaging way to learn and has a long-lasting effect. I will talk about the research and my role in the experience for the rest of my life.”

Phasmophobia devs tease “big things ahead” for the horror game

How climate change could impact algae in the global ocean