The streets of London are a dangerous place in Watch Dogs Legion. Authoritarian thugs batter innocent pedestrians while criminal organisations exploit them in the shadows. It’s up to you as the newest (and also as every) member of DedSec to turn the tide and fight to gain control over London. But with dozens of things to do, places to explore and things to hack, it can be a little daunting as you start your fresh subversive element life.

If you’re looking to start the game running, this is the right place to be: here’s everything you need to know as a noob revolutionary in a not too distant future. Also, stay tuned for more Watch Dogs Legion guides!

Cars are more than a vehicle 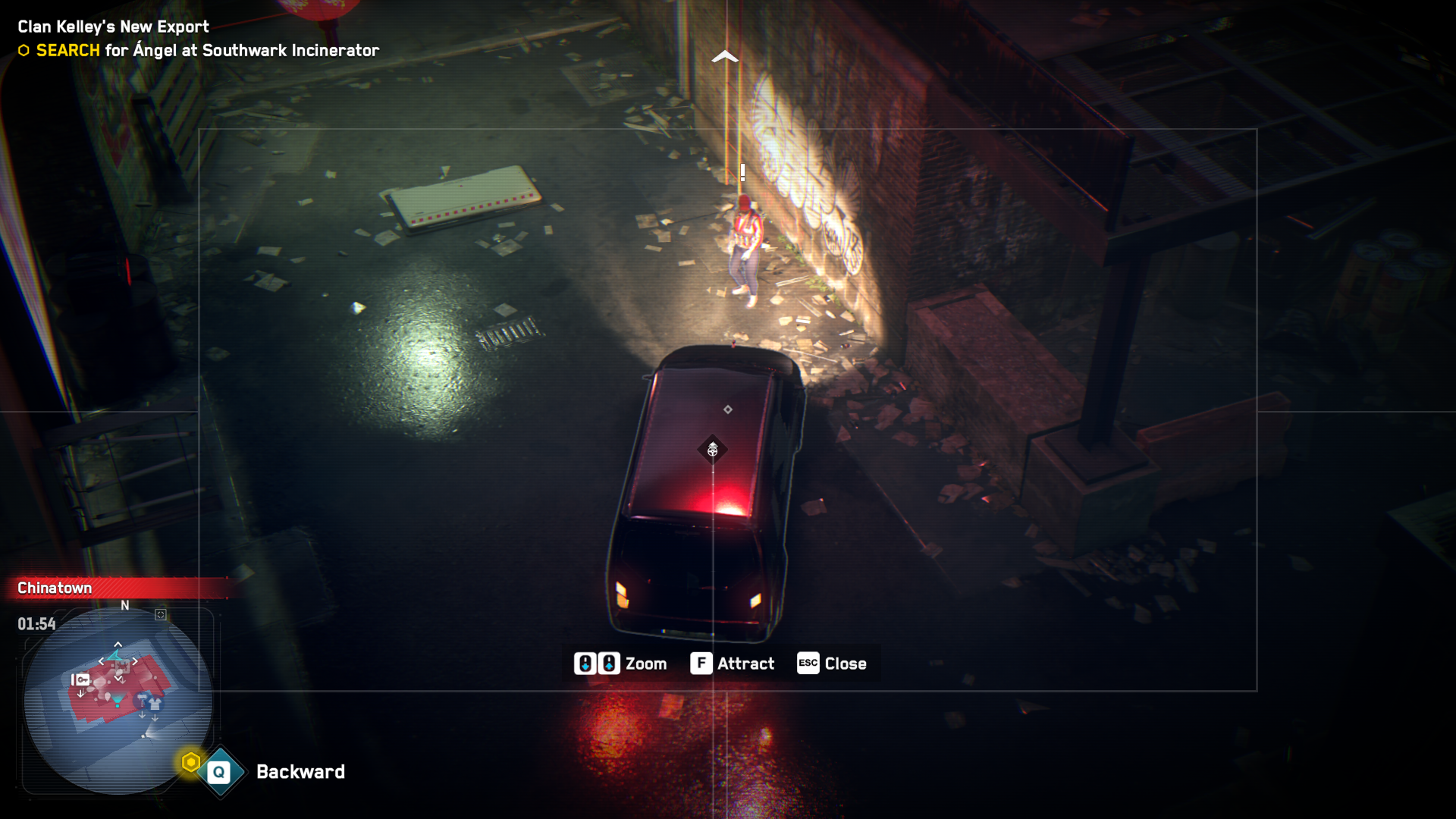 Driving in London has always been a bad idea. The congestion charge, on top of the actual congestion, makes it an expensive and ineffective way to travel the city at the best of times, but now thanks to ctOS you’ll also have to deal with hackers remote piloting your car.

In Watch Dogs Legion the streets are a lot emptier than they are in real life, but that doesn’t mean that driving is now the best way to get around. Tube stations act as fast travel locations and you’ll find they are much easier and faster than using a car if you’re trying to get somewhere in a hurry.

But cars still have their uses. Nearly everything in Watch Dogs Legion is hackable, and unlike earlier games in the franchise, you won’t have to unlock some of the basics. So while you could use your phone to move other cars out the way as you speed through the city, there’s a point of other possibilities as well.

When trying to remain discreet, players can use vehicles not just as distractions but as weapons as well. Cars turning on by themselves and driving into something causes a commotion that can distract a whole group of guards if they happen to be sight or earshot. Failing that, any guard that wanders in front of, or behind a parked vehicle can be quickly dispatched. It might not be the most stealthy way to remove an Albion footsoldier, but it’s just as effective as any weapon. 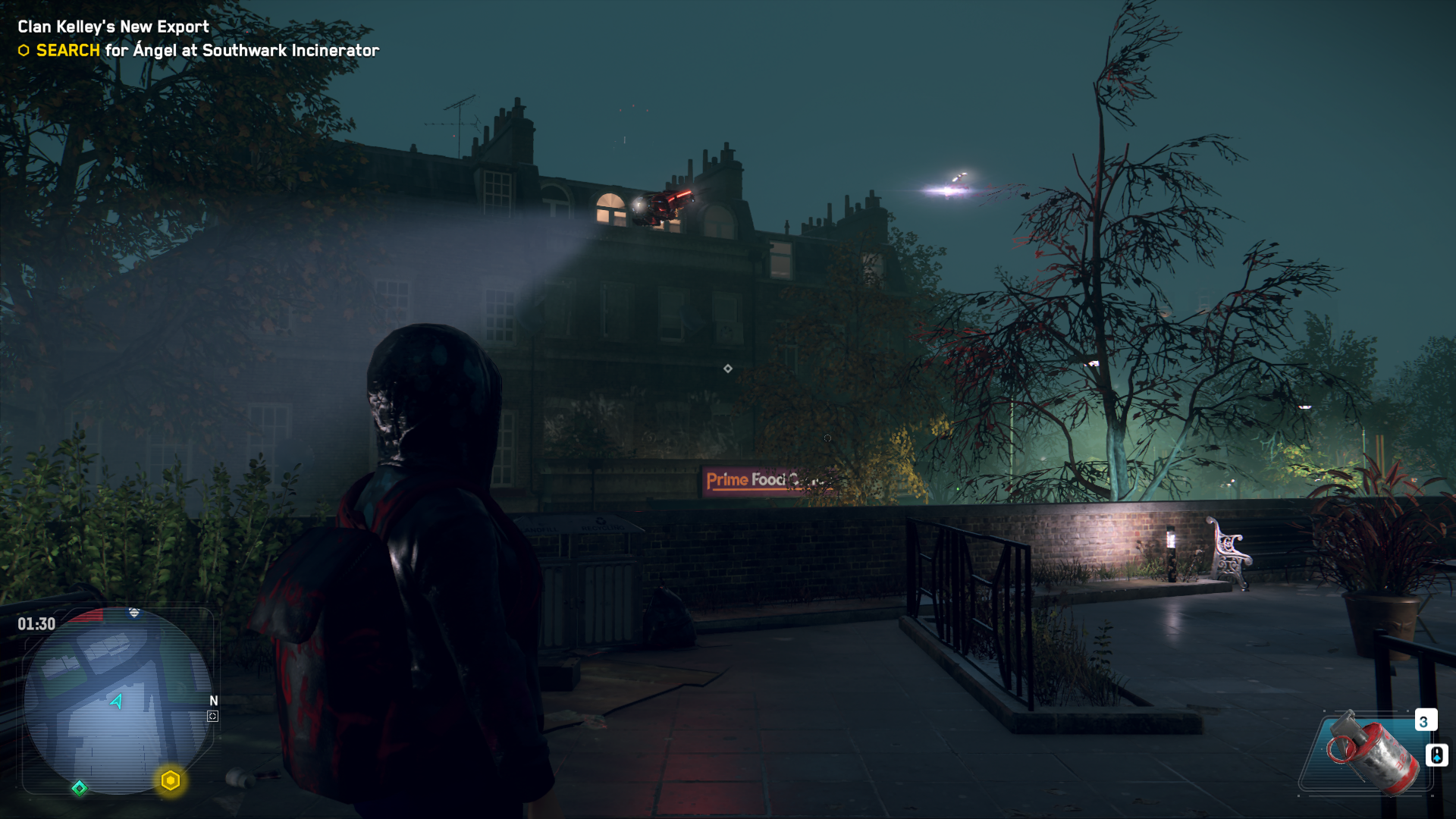 Once upon a time, the stars are blotted out from London’s skies thanks to years of industrial smog. But in Watch Dogs Legion you can see dozens of stars lighting up the night sky, as well as the day sky. On second thought, those probably aren’t stars, but that just makes them even more useful.

If you’re trying to scout a restricted area, you’ll quickly learn to use the CCTV network and hope throughout the area region highlighting enemies and spotting key objectives. But while these sweeps will give you a diorama of the section you explore to explore, it’s difficult to get the full picture. There might be blind corridors you haven’t spotted, or rooms unobserved by cameras. A drone will give you a much better chance of mapping out the area more effectively in your head.

Some operatives have access to their own drone, which you can use deploy whenever you feel a little nosey, but for everyone else, they’ll have to improvise. Luckily, the streets of London are watched from on high by an armada of different drones that you can spend a few tech points to get control of.

It’s well worth the expense as the drones can quickly and effectively scout the area, potentially even finding yourself a new route that you might have not spotted from the street level camera. A lot of the areas in Watch Dogs Legion allow you to explore the vertical and it’s always worth checking if the roofs and balconies of an area you want to trespass through. 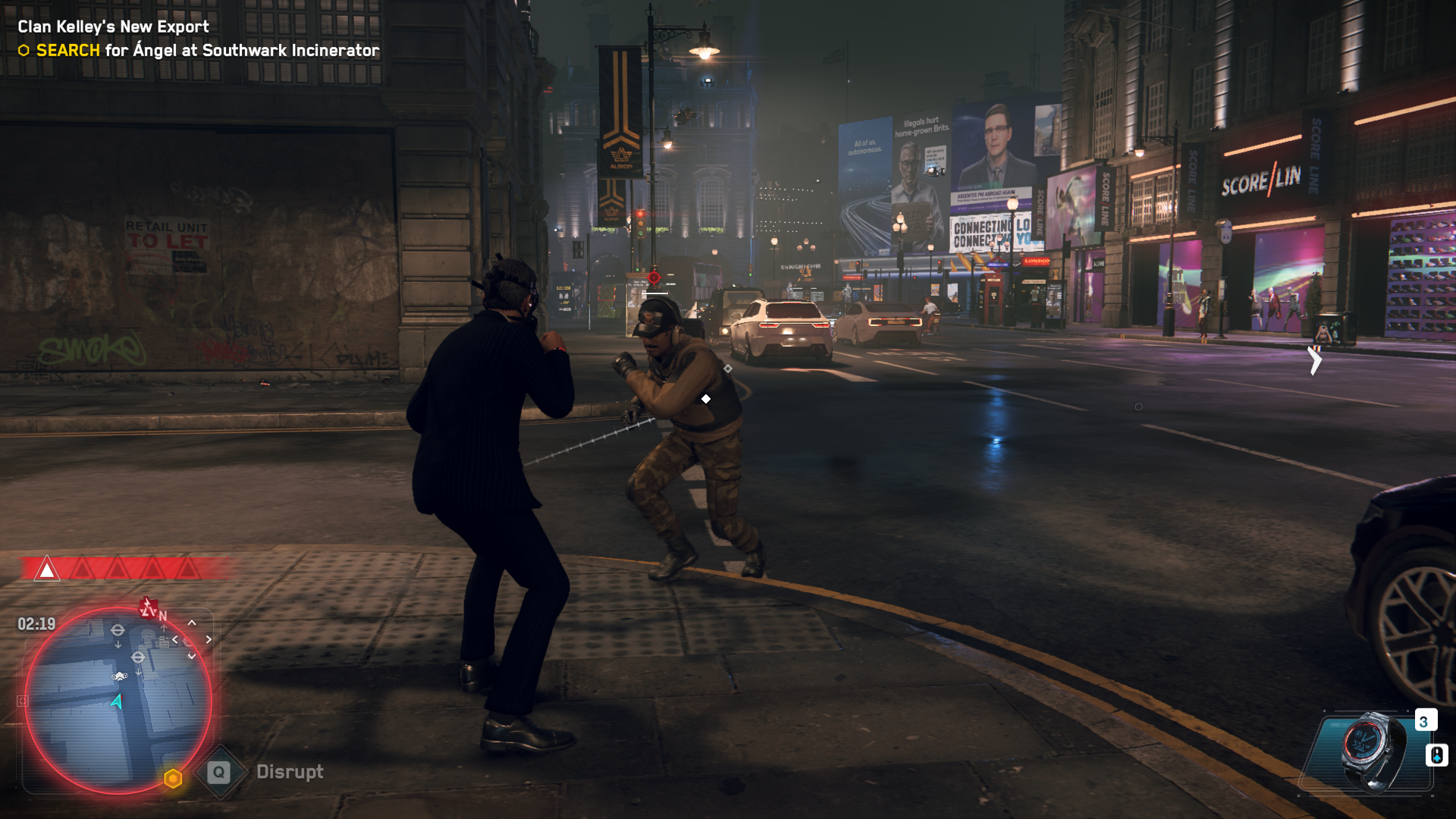 The game lets you know this, but it’s hard to fully appreciate the situation until you’ve found yourself in the crosshairs of a police sniper. Like Grand Theft Auto, Watch Dogs Legion has a wanted system that progressively gets high as you continue to wreak havoc across the city. But unlike Grand Theft Auto, Watch Dogs Legion isn’t all about guns.

If you can avoid unholstering your firearm, the security forces of London will do the same. Having a player with a melee weapon like a bat or baton will prevent the armed response agents, and drones from hunting you through the city. Obviously, if you want a bit of action, by all means turn the streets of London into a Gerard Butler film.

But if you’re trying to get away from the fight or go back into hiding, the worst thing you can do is pull out your gun and take out those you suspect are the last few pursuers. Instead, you should use your tech, set up traps and engage in a good old traditional punchup before ducking back around the corner.

Don’t try and get away on foot 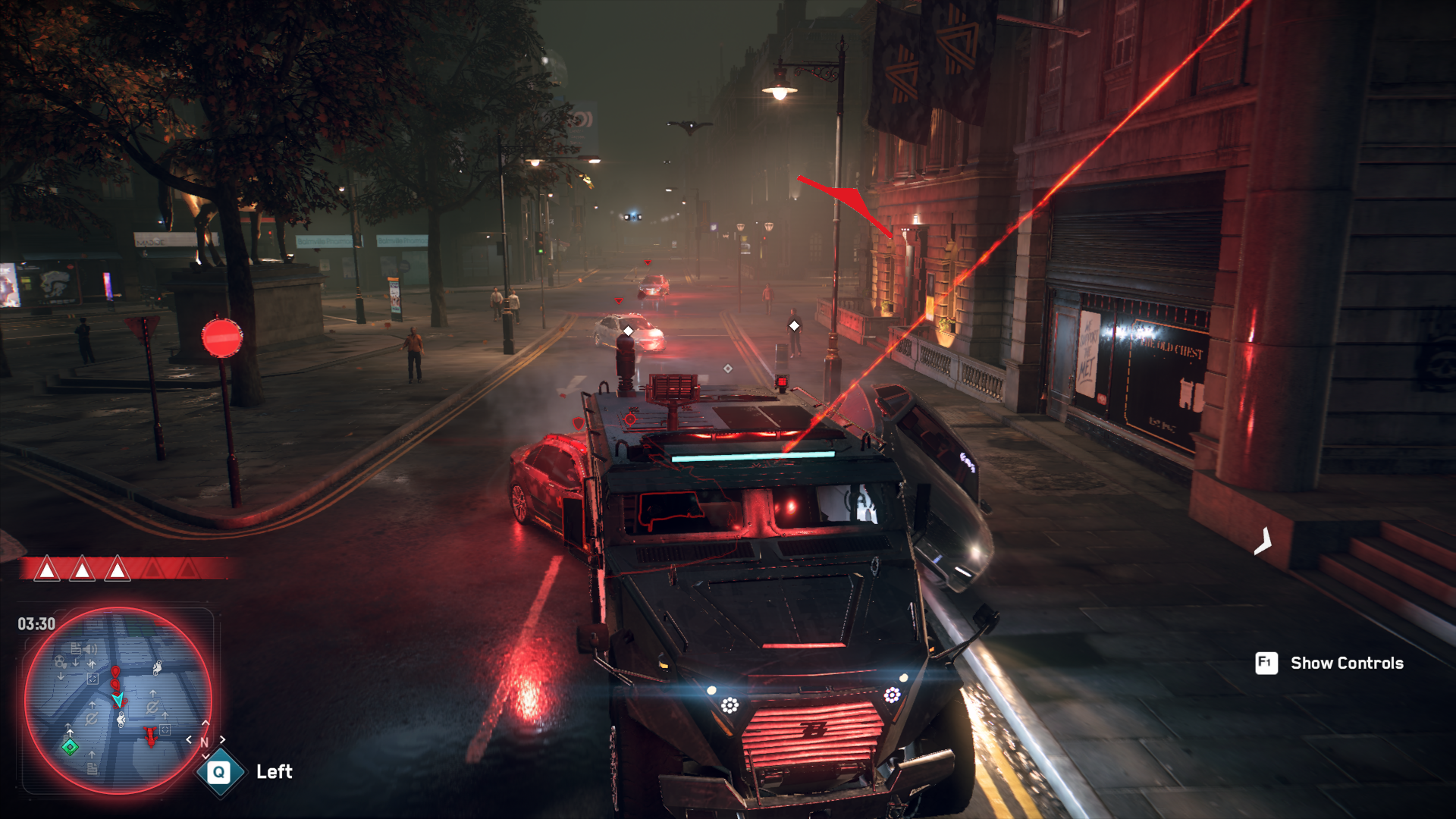 While we’re talking about escaping the law, be wary about doing so on foot. Even on the lowest wanted level, simply running from the cops, even on the easier difficulties, isn’t always easy.

Albion thugs have a pretty wide cone of vision that also extends quite far down the street. And while you might be thinking ‘that’s easy enough to avoid, I’ll just sneak around the corner and break the line of sight’, you would be wrong. On top of the drones above that can keep an eye on your, there’s also the simple fact that the game knows exactly where you are. Patrol cars will come screeching in from the edges of the map, and they’ll nearly always cut you off.

Instead of running, trying jumping in a vehicle, another ability that Watch Dogs Legion doesn’t make you unlock. Behind a wheel, you can speed past the spawning reinforcements and use Albion’s own security measures to get the slip. Not only that, but you can once again use your power over the other cars on the road to your advantage. Perform a movie-like stunt of speed a truck between you and the chasers so they chase, or simply throw as many motorcyclists between you and the pursuit vehicles as you can.

Look out for spiderbot boxes 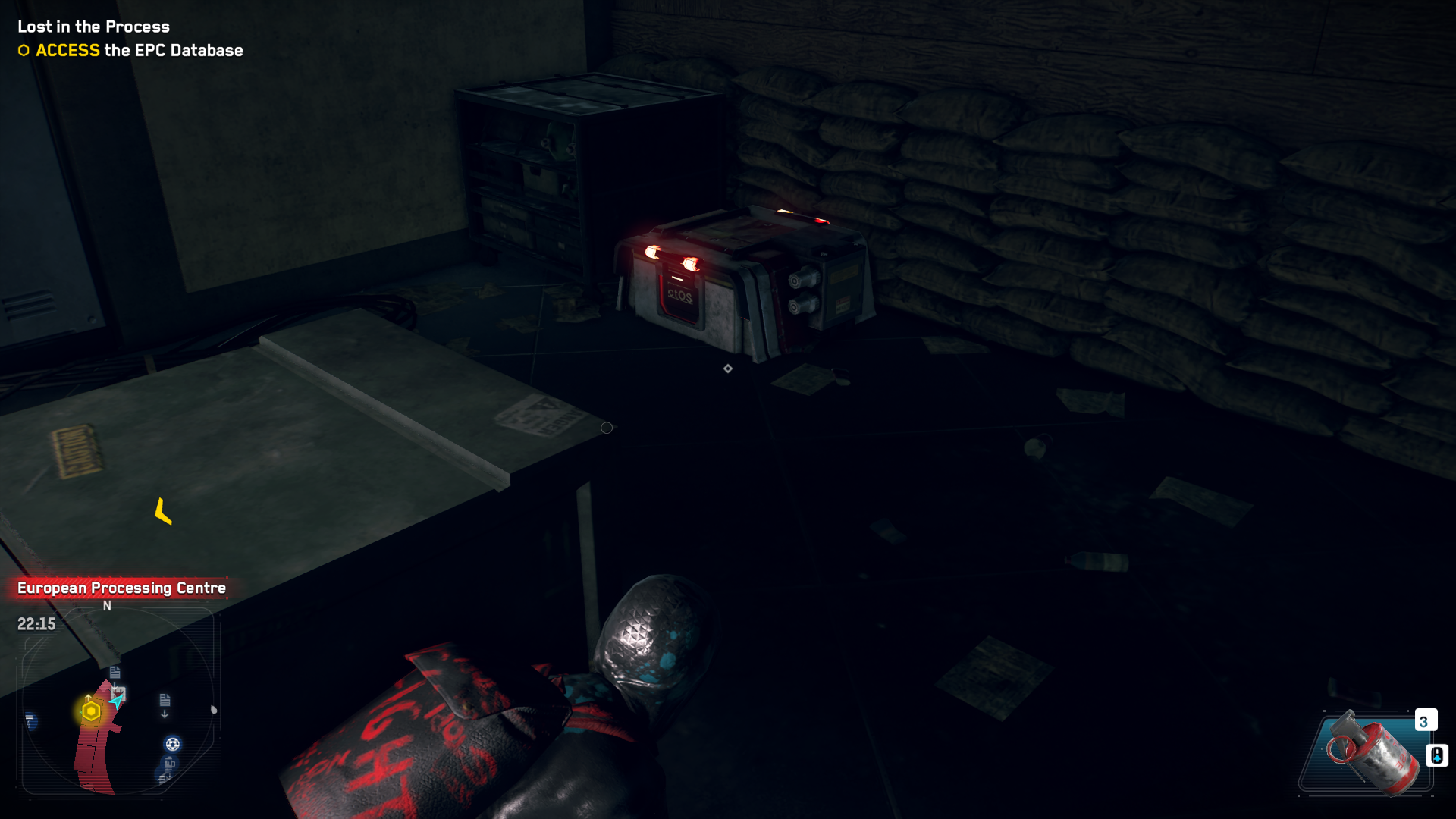 Spiderbots are one of the key gadgets in Watch Dogs Legion. Not only do they appear early on the plot, they also serve as scouts and explorers in a lot of the restricted areas. Spiderbots can skitter through air vents and gaps that you wouldn’t be able to reach otherwise.

Although you can carry one around with you, with the right operative of course, you can also find them in strange little boxes scattered around the world. What’s very useful about that is it means you can take a different gadget into the field if you want, but importantly, you can know there’s somewhere for a spiderbot to go nearby.

Even if you haven’t spotted the tell-tale break in the fence or neon red of the air vent, this little box serves as a warning, letting you know you should be looking around for somewhere to use the spider inside. These boxes are placed for a reason, so you can always find some collectibles or alternate routes nearby. The spiderbots themselves seem to have no proximity limit once you’ve hijacked them, so you can take them as far as you need if you haven’t found a closer one. Even more handily, is that the spiderbox appears on the minimap as a small spidery symbol that alerts you as well.

Deathloop Will Use PS5 DualSense Controller For Gun Jams, Haptic…