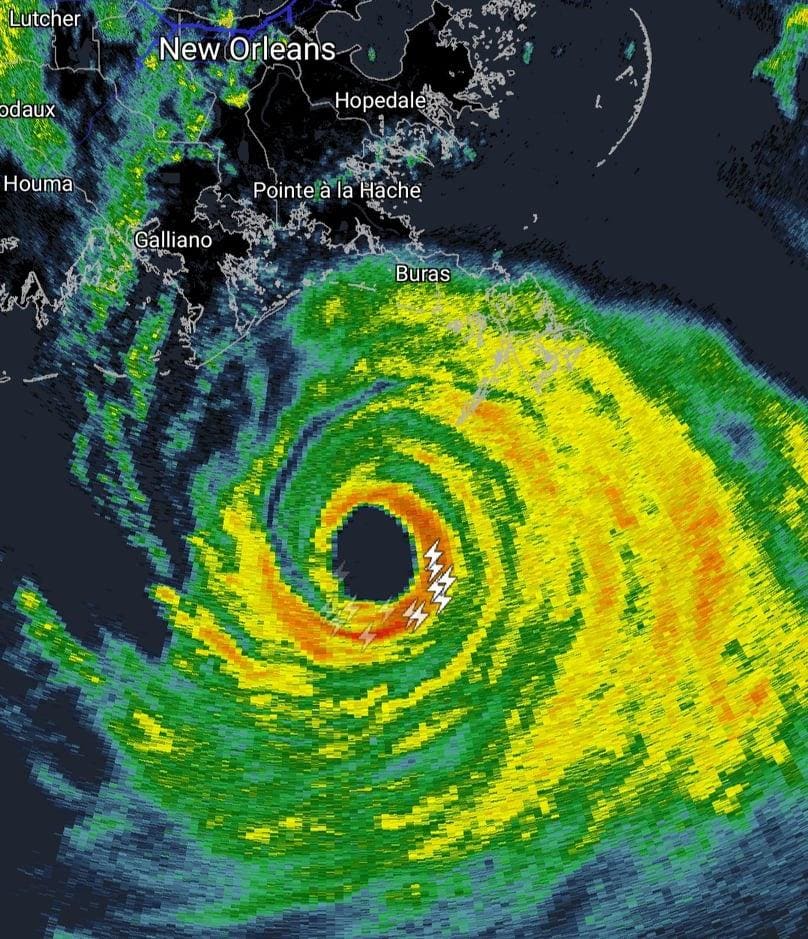 As I write this early in the morning on August 29th, 2021, I reflect on another August 29th. In 2005, Hurricane Katrina made landfall and caused catastrophic damage along the Gulf Coast, including in New Orleans. As a meteorologist and atmospheric sciences professor, there is a certain fascination with storm like Katrina but a healthy respect for how they can alter lives also. We are staring down a life-altering storm with Hurricane Ida approaching the Gulf Coast. Here are 4 reasons why Ida feels like a worst-case scenario.

The first reason is that in the last day or so, Ida was consistently on the right side of the envelope of model-projected tracks. Jack Sillin, an atmospheric sciences student at Cornell, tweeted on Saturday morning, “Satellite fixes suggest the storm remains towards the eastern edge of track guidance.” In a previous piece written on August 27th, I cautioned that an eastward jog of Ida’s track would bring the storm closer to the highly-populated New Orleans area. The current track brings the storm in just to the west of New Orleans which means that the city will be on the right side of the eye. This side, particularly the right front quadrant, is where the strongest winds, highest surge, and tornado threats tend to be located. Parts of Southeast Louisiana and New Orleans could experience a 150+ mph winds, 15-2o inches of rainfall, and 12-16 feet of storm surge.

The second reason that “worst-case” scenario comes to mind is that the storm is undergoing rapid deepening just before landfall. While writing this, I glanced at some of the latest pressure information from Hurricane Hunter planes flying within Ida. The surface pressure may down around 930 mb and dropping in the hours before landfall. Lower pressure means the hurricane is getting stronger. Dr. Sam Lillo is a research meteorologist at NOAA CIRES. He tweeted on Sunday morning that Hurricane Ida is, “The furtherest north hurricane on record in the Atlantic to deepen 50 mb in 24 hours or less.” The graphic from the amazing troPYcal software, co-developed by Lillo, provides perspective on that stunning meteorological situation. Hurricane Ida is currently a very strong Category 4 storm with 150 mph winds and before landfall later Sunday, it may be a Category 5 storm. From an impacts perspective, it won’t matter.

A third reason for a “worst-case scenario” feel is the track fetch. Ida has been coming towards the coast with somewhat of a southeast-to-northwest. Experts have described such fetches as being optimal for maximized storm surge in coastal regions near New Orleans. Much of the New Orleans area is low-lying (and even below sea level) and has to use complex pumping systems to remove water on even heavy rainfall days. It also has a very large lake (Pontchartrain) to its north. It is a city dependent upon levees and infrastructure in times like this. Let’s hope they hold.

My fourth concern will place Ida in unprecedented territory. The region (and nation) is currently in the fourth wave of the COVID-19 pandemic, and Louisiana is particularly gripped by the virus. Unfortunately, hospitals are near capacity and vaccination rates in this region have been extremely low. With vaccine denial and some people unwilling or unable to evacuate Ida, this may be the worst scenario of them all:

When I testified before Congress a few years ago, I warned policymakers about the looming threats of extreme weather events and compounding effects as our climate changes. Is our infrastructure ready? Is our healthcare system ready? While Ida is certainly an anomaly storm in the midst of a pandemic, compound events like this will continue to burden our society.

When I glanced at my radar App this morning, the image made me sick to my stomach. I am not a scholar that needs to hype the weather for the sake of my career, clicks, or likes. I am the director of the atmospheric sciences program at a major university and the former President of the American Meteorological Society. Beyond titles, I am a human being concerned for people in Louisiana and surrounding areas today.

Even if Ida is not the textbook “worst-case” scenario, it sure feels like it.

Denial of responsibility! TechCodex is an automatic aggregator of the all world’s media. In each content, the hyperlink to the primary source is specified. All trademarks belong to their rightful owners, all materials to their authors. If you are the owner of the content and do not want us to publish your materials, please contact us by email – [email protected]. The content will be deleted within 24 hours.
Climate ChangeGulf CoastHurricane IdaHurricane Katrinahurricane seasonNew OrleansSoutheast Louisianaworst-case scenario
0
Share

‘The Sims 4’ reveals next two Kits and…

Here’s how Pokemon GO trainers can get…