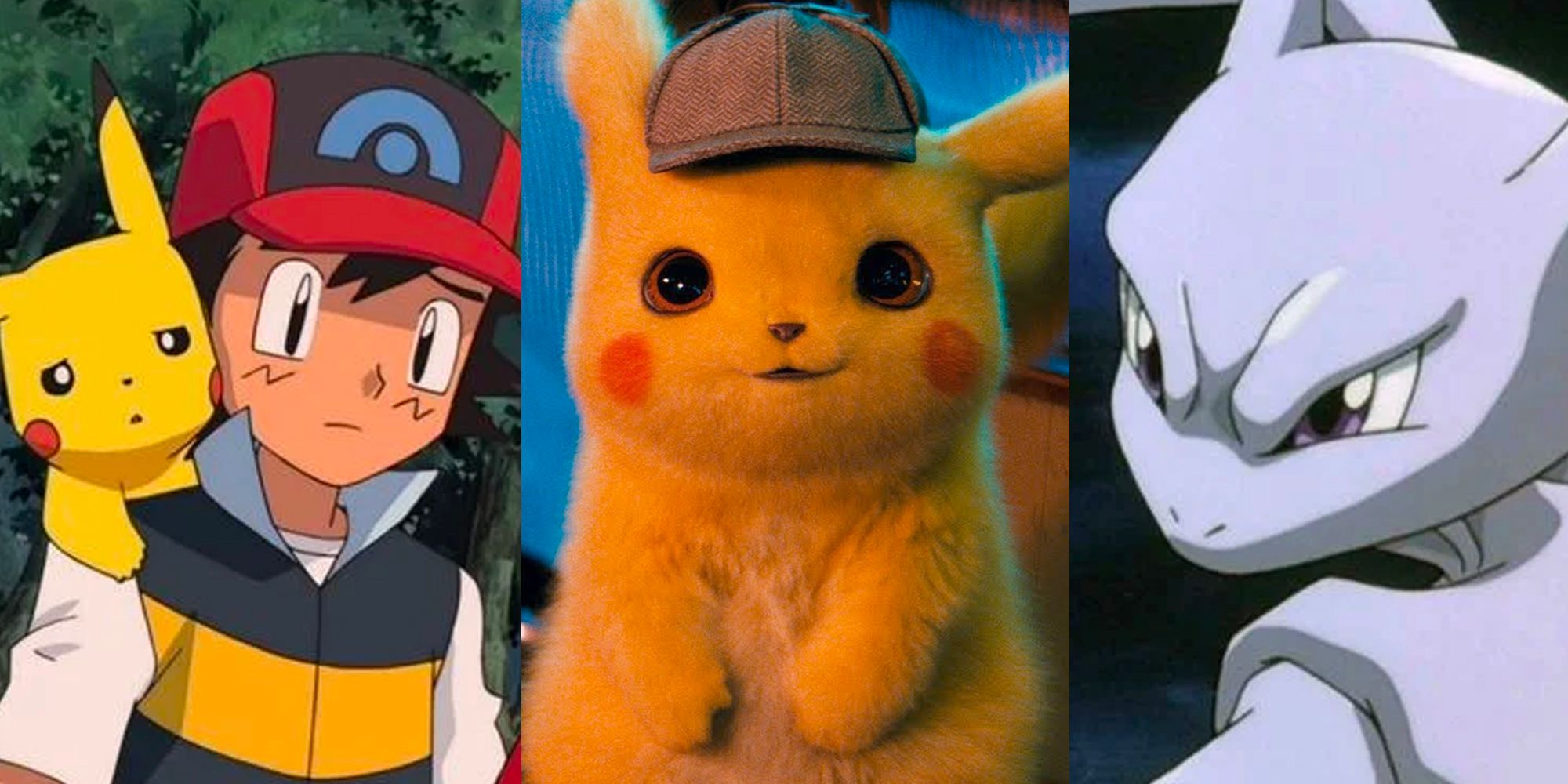 Pokémon has had a gargantuan impact on modern popular culture. While originally, the franchise was based around trading cards, Pokémon evolved into gaming, TV shows, and finally, into cinema. Since the release of the first Pokémon movie, there have been 22 Pokémon movies released, with another scheduled for release this year in 2020.

Combined with the recent release of Pokémon Sword and Shield, the continued popularity of Pokémon GO, and the success of Detective Pikachu, it is clear that Pokémon will continue to be a force to be reckoned with for years to come. This article will list the best Pokémon movies (including TV movies) ranked according to IMDb.

Updated on June 19th, 2021 by Kristen Palamara: The best Pokémon movies are always subjective as almost every fan grew up with a favorite in mind and rewatch the ones they remember seeing in theaters for the nostalgic value, but each theatrical and television release of the best Pokémon movies have been ranked according to IMDb. There is endless Pokémon content out there for fans from games to cards to animated movies and live-action movies, but these are the best Pokémon movies for fans to check out if they want to dive into the Pokémon filmography.

This recent Pokémon movie was initially released in Japan and followed Ash once again in a new adventure as he meets new friends and foes.

Ash meets a new mythical Pokémon Volcanion and the two are magically bound together much to Volcanion’s dismay as the Pokémon absolutely hates humans. But, Volcanion has to learn to work together with Ash to complete a rescue mission.

This iconic Pokémon movie follows Ash and friends including Misty and Tracey as they’re set off course from their adventure by a huge storm. The storm strands them on Shamouti Island right before an annual festival.

Ash is chosen to be the hero at the festival and the celebrations bring about the mythical Pokémon birds, Moltres, Zapdos, and Articuno who control the elements of fire, lightning, and ice.

This animated Pokémon movie follows Ash, Misty, and Brock as they travel to the Italian-esque city Alto Mare that is protected by two hero Pokémon Latias and Latios.

Team Rocket threatens the security system of the town so the group has to help the two Pokémon protect everyone in the town. Although the movie has largely negative reviews on Rotten Tomatoes, it’s still one of the higher-ranked Pokémon movies on IMDb.

Destiny Deoxys is the seventh movie in the mainline Pokémon film series and features both legendary Pokémon Deoxys and Rayquaza as the two battle above a city, wreaking havoc on the surrounding area. Rayquaza successfully defeats Deoxys after firing a hyper beam at the alien Pokémon at close range. The body of Deoxys is destroyed, leaving a purple crystal that falls into the ocean and a green crystal that is found by researchers.

The film picks up four years later and, after the mysterious return of Deoxys, follows Ash, Brock, May, and Max as they try and figure out the cause of Deoxy’s return and try to put an end to the battle that rages between the two legendary Pokémon.

The 11th Pokémon movie, Giratina and the Sky Warrior picks up immediately after the events of the prior movie, as Shaymin gets pulled into a battle between the legendary Giratina and Dialga.

After Shaymin escapes from Giratina’s reverse-world, the mythical Pokémon runs into Ash and the gang, with the rest of the film focussing around Ash, Brock, and Dawn as they help Shaymin to return to the Gracidea Flower Garden in order to participate in a flower-bearing ceremony.

Ash, Brock, and Dawn arrive in a new city to watch the Pokémon Baccer World Cup. However, while visiting the city, Ash and the gang discover that a Zoroark has fallen under the control of a maniacal villain and is wreaking havoc on the city by taking the form of the legendary trio Entei, Raikou, and Suicune.

Ash and the gang are then asked by Zorua, the child of the Zoroark, to help save its mother and free her from the grip of the evil villain.

The Mastermind of Mirage Pokémon was created for the 10th anniversary of the series and marked the first time that an English-language release of a Pokémon film was worked on exclusively by Pokémon USA.

The plot follows Ash, Brock, May, and Max as they meet up with Professor Oak and Misty in order to investigate a mysterious Mirage Pokémon System that has been developed by Dr. Yung. Ash must then battle a Mirage Mewtwo, controlled by the enigmatic Mirage Master to prevent him from achieving his plan of world domination.

This Pokémon movie is more of a prequel and shows the first adventure that Ash and his newfound friend Pikachu go on when Ash becomes old enough to be a Pokémon trainer.

Professor Oak gives Ash a Pikachu to accompany him on his first adventure and the two personalities clash at first as Pikachu is upset to be with a trainer and refuses to listen to Ash. Ash learns to respect that Pikachu doesn’t want to be in the Pokéball and the two instead work together and protect each other as their friendship grows.

Ash and several other trainers work together with their Pokémon to try to save a city in this recent Pokémon adventure.

Fula City was founded by the legendary Pokémon Lugia and the town celebrates its founding with an annual wind festival, but this year the festivities are cut off by a disastrous forest fire and hunters looking for a peaceful yet valuable Pokémon Zeraora.

This was the movie that kickstarted them all, not only starting a brand new film franchise but also managing to take its place in the childhoods of a whole generation. The film follows Ash, Misty, and Brock as they discover the creation of a new Pokémon, Mewtwo.

The movie features the classic and heartbreaking battle between the cloned Pokémon and, potentially, was the first movie many of us cried at.

Thousands of years before Ash’s time, a legendary Pokémon named Arceus came to Earth to take back the Jewel of Life it had given to a man named Damos. However, Damos was not willing to return the jewel and attacked the legendary Pokémon with an army of Pokémon. After the confrontation, Arceus left Earth and went to sleep, while vowing to judge all of humanity based on Damos’ actions.

After Arceus reawakens, angered by humanity’s actions in the past, the film follows Ash, Brock, and Dawn as they must change the past in order to change the present.

While Pokémon movies are known for having a fantastic song, most notably the Pokémon: The First Movie, this film has, perhaps, the most starstudded song, with Sarah Brightman performing the title song – Where the Lost Ones Go. In addition to the theme song, the Rise of Darkrai is strongly linked with both the Jewel of Life and Rise of the Sky Warrior, with the three films being referred to as the Diamond and Pearl Trilogy.

This film follows Ash, Brock, and Dawn as they travel to Alamos Town and attempt to save it from the devastating powers of Dialga and Palkia, who can bend time and space between them. Additionally, the gang also tries to help change the image of Darkrai, who is seen as evil and scary by the local inhabitants.

The movie picks up from the events of Pokémon: The First Movie, with Mewtwo hiding in the Johto region since the events of the movie. However, the leader of Team Rocket, Giovanni, discovers the location of Mewtwo and launches a mission to recapture the powerful, legendary Pokémon.

As luck would have it, Ash and the gang are also traveling through the Johto region and become embroiled in the plot as they battle Team Rocket and try to save Mewtwo.

Detective Pikachu represented the first foray of Pokémon into the world of live-action cinema. Due to the immense success of Pokémon Go, the Pokémon Company believed that it would be able to launch a successful theatrical Pokémon film in the west.

RELATED: Detective Pikachu: 5 Pokémon We Want To Star In Their Own Films (& 5 We Don’t)

Detective Pikachu follows a young boy as he meets a talking Pikachu (hilariously voiced by Ryan Reynolds) while trying to solve the mystery of his father’s disappearance amongst thousands of Pokémon from the games and shows. The movie received warm reviews from critics and prompted many to suggest that it is the best live-action video game movie.

Lucario and the Mystery of Mew was the eighth in the Pokémon mainline film franchise and was one of four films to be nominated for the Best Anime Feature Award at the American Anime Awards.

The film follows Ash, Brock, May, and Max as they meet an ancient Lucario and uncover events surround the Pokémon’s past, including the reasons why his master abandoned him. In addition to the Pokémon’s mysterious past, the gang must also protect Pikachu, Meowth, and Mew from the Tree of the World’s Beginning.


Next
MCU: 9 Unpopular Opinions About Thor (According To Reddit)

WhatsApp is planning another change on iPhone and Android

The Best Boxing Movies Of All Time, Ranked (According To IMDb)

Google: prepare for the most expensive Pixel 6…