11 Of The Worst Songs In The Movies, According To Reddit 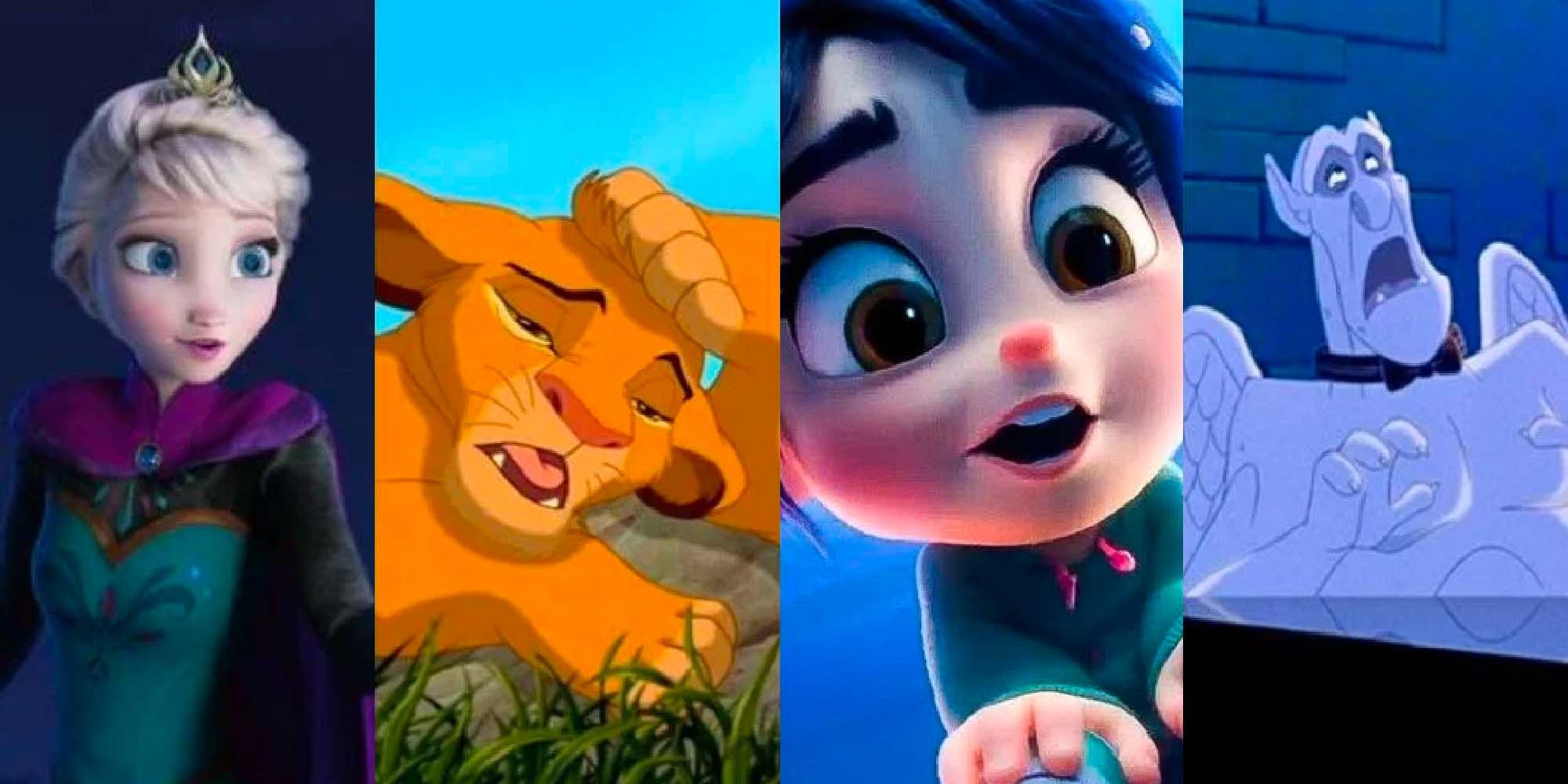 Animated Disney films have more to offer than extravagant graphics and storylines, there are also award-winning songs that get stuck in viewers’ heads. The music is just one part of Disney’s charm. It’s something viewers of all ages can join in, enjoy together, and remember years later. Although not every Disney movie has music in it, there’s something special about those that do.

Songs like “Under the Sea,” “A Whole New World,” and “Colors Of The Wind” have all won awards over the years for their lyricism and popularity, but not every song was a hit with fans. Over on Reddit, Disney fans chimed in with songs they deemed “the worst,” regardless of the movie or its popularity.

Updated on September 22nd, 2021, by Lynn Gibbs: One of the best parts about Disney movies are the songs that weave in and out. Each Disney song has a special place in the film and continues the storyline, as the lyrics typically deal with the main character’s journey. Disney songs themselves are magic because they get stuck in fans’ heads and are remembered decades down the road. However, not every Disney song is a success. Some dated Disney songs are on the controversial side of things while others are found to be just plain old annoying.

When The Lion King’s Simba runs away from home and finds himself in a new jungle with his new pals, Timon and Pumbaa, they teach him a new way of life. With Timon and Pumbaa being two of The Lion King‘s most likable characters, fans enjoyed watching their friendship with Simba grow. And with them only eating bugs and plants, they encourage the runaway prince to do the same. They also teach him a phrase they live by, Hakuna Matata. The phrase means “no worries” and became the trio’s motto.

As famous and beloved as this song is, Lakerboy226 wrote, “‘Hakuna Matata’ [is the] worst dribble ever created.” Sandydragon1 agreed and wrote that it was their “least favorite Lion King song.”

In the 1953 Disney film Peter Pan, Peter rescues a Native American princess, Tiger Lily, from Captain Hook. While Tiger Lily’s tribe is celebrating her return after being kidnapped, the tribe breaks out singing a song called, “What Makes the Red Man Red.”

On Reddit, Fonzie96 wrote, “‘What made the red man red’ and pretty much anything to do with the [Native American] ‘Indians’ in Peter Pan is horribly offensive.” The lyrics break down the unique history of their tribe that explains their skin tone, and while it may have passed in the ’50s, it’s painfully racist in 2021 and did not age well.

Disney’s version of the Greek God, Hercules, came out in 1997. In the movie, Zeus and Hera have a son, Hercules, but after Hades (Zeus’s brother) becomes jealous, he finds a way to separate Hercules from his powerful parents and transports him to the human world.

RELATED: Every Song In Hercules On Disney+, Ranked Worst To Best

Eventually, Hercules recognizes his God-like differences and begs his new friend Phil to give him hero lessons so that he can return to his Godly parents and live out his destiny. Phil sings the song “One Last Hope” as his response to assisting Hercules on his journey. Quarnex_battery told Reddit, I think one of my least favorite songs is ‘One Last Hope.'” Fontizmo agreed and followed with, “Melody and lyrics aside, no amount of manipulation could make Danny Devito’s voice appealing.”

In The Lion King, Mufasa is King and his son Simba is the future king. In one scene, Mufasa is teaching Simba about the circle of life and how he controls everything “the light touches” — a quote that was all too real for Simba. At that moment, Mufasa’s assistant Zazu flew in to give Mufasa the morning report.

At this time in the movie, Simba is practicing his pouncing and pounces on Zazu as live target practice. However, according to Cheap Theatre Tickets, in a 2003 special edition of The Lion King, a song was added to the DVDs called “Morning Report.” The song was composed by Elton John and was meant for the original soundtrack but got cut out. Disney seamlessly added the song in the 2003 edition but it looks like they should have left it out because Dansulas and Jascm found it “totally unnecessary.”

“Let It Go” is one of those songs that doesn’t need a description. It was essentially Frozen’s theme song and became incredibly popular and was on repeat for months. Sung by Elsa’s Idina Menzel, the song was written by Kristen Anderson-Lopez and Robert Lopez. Elsa sings the famed song after her dark magic abilities are revealed.

RELATED: All The Songs from Frozen Franchise, Ranked

As a new queen, Elsa had to hide the fact that she was able to freeze things with a simple touch. She was embarrassed and ashamed of her magic, so she separated herself from the community and fully accepted her skill. And while “Let It Go” went on to win oodles of awards and became the theme song of 2013, NateNate60 told Reddit, “‘Let it Go’ is the single most annoying song on the planet.”

Moana was released in 2016 and followed the life of a young girl who had to save her Pacific Island tribe from a curse that could have ended life as she knew it. She left land for the sea to start the biggest adventure of her life. And like most Disney movies, there were amazing songs on Moana‘s soundtrack but the song “Shiny” was not a favorite amongst all fans.

In the film, a crab with a glittering shell is dangling Moana around like a rag doll as he sings about loving all things that shine. Compared to the other songs in the movie, this one failed to land on Reddit. Rackik wrote, “I love Moana. I really, really do. However, I hate this song passionately.” They continued saying, “‘Shiny’ has no business whatsoever in Moana, which is not to say that it’s inherently a bad song.”

Ralph Breaks the Internet was an innovative Disney sequel to Wreck-It Ralph. Ralph and his best friend Vanellope are characters in arcade games who occasionally leave their home game to socialize with other characters.

Fun and Fancy Free is an animated movie produced by Walt Disney in 1947 that shared two stories. One story revolved around a circus bear named Bongo who escaped and fell in love with a wild bear, Lulubelle. Bongo was unaware that slapping each other was a sign of affection in the wild bear community, so when Lulubelle slapped him, he didn’t know what she was doing.

Things got tricky when Lulubelle slapped another bear accidentally, which meant she was now the other bear’s partner instead of Bongo’s. The bears break out into a song called “Say it With a Slap,” which had all the bears slapping their crushes as an explanation for the audience. The notion of slapping a person because they’re liked is not the greatest message Disney had. Foxelexof wrote that it was “The absolute worst Disney song ever.”

Disney movies have an emotional aspect to them that pulls on the strings of viewers’ hearts. And Dumbo is one of the most emotional animated movies that Disney has on its roster.

After releasing in 1941 (although there was a live-action produced in 2019), Dumbo told the tale of a baby elephant that belonged to the circus with his mother because of his magical ears. Sadly, Dumbo and his mom were separated after she became angry at those bullying her son’s ears. To soothe their mutual pain of being apart, Dumbo’s mom sang one of the saddest songs in Disney history, “Baby Mine.” The song is from a mother’s point of view that shares her love for her child. Gifmaker77 wrote, “If you didn’t cry at this scene at some point in your life then you are broken. There’s nothing like the bond between a mother and her baby.”

In 1991, Disney released yet another animated movie, Beauty and the Beast. The film follows a young woman who becomes a captive of a beast-like creature just outside of her town. As it turns out, the beast was actually a man—a young prince—who was cursed by a spell to live as a beast until the spell was broken. Along with Beast, those that worked with him were also doomed by the curse and transformed into objects around the castle.

The song “Human Again” was originally part of the film but cut at the last minute. It was later added to the 2002 Special Edition released on IMAX and the Special Platinum Edition DVD, according to the song’s Fandom page. And while Penultima admits the song has a good backstory, “It’s just a little too long, drags too much at the start, and starts to feel kind of repetitive.”

Disney’s Hunchback of Notre Dame tells the tale of the Notre Dame bell-ringer, Quasimodo, and his insecurities of his hunchback. His only true friends are the church’s gargoyles who accept Quasimodo for the man he is. While in the church’s bell area, Quasimodo watches the world beneath him unfold.

In one scene, the gargoyles sing a song praising Quasimodo’s differences and how they make him unique. The song is actually quite inspiring and lifts his spirits. Sadly, it wasn’t beloved by Reddit user Fontizmo. They wrote, “Since the rest of the soundtrack is such a beautifully composed Disney score… What the h*ll was that?”

NEXT: 10 Biggest Differences That Disney’s Hunchback Of Notre Dame Movie Made To The Original Story

Lynn is a nomad who travels the globe on the hunt for her next adventure with her husband. A lover of being outside (and finding the best latte in town), Lynn is typically hiking, walking, or jogging when she’s not focusing on her love of writing. When it comes to shows streaming on Netflix or anything Bravo-related, Lynn’s your gal.