10 Most Romantic Scenes Fans Watch Over And Over 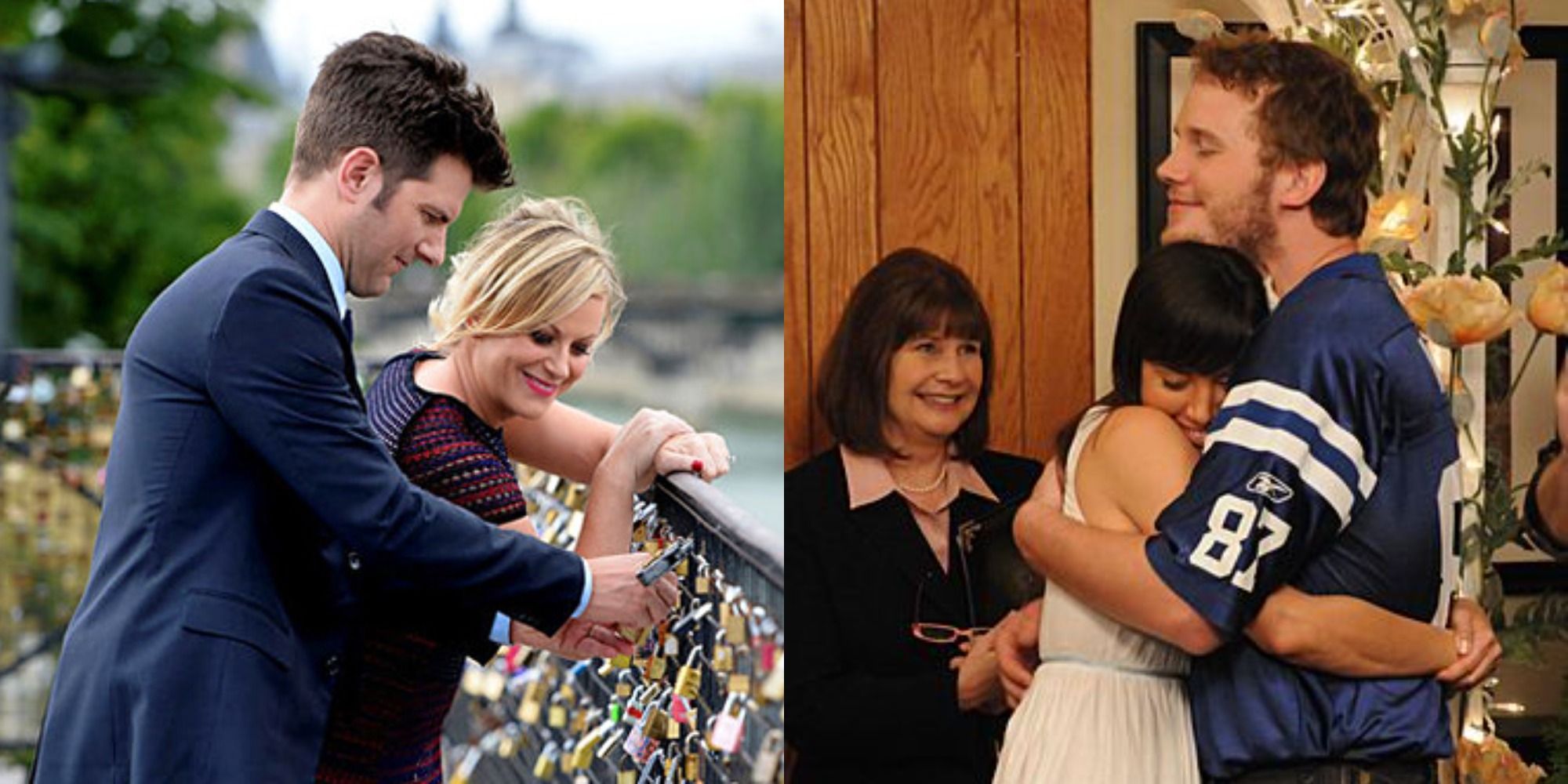 Parks and Recreation is one of the most beloved comedies of the late 2000s, and that is mainly thanks to its gang of unapologetically endearing characters. Whether it is Leslie Knope, Ron Swanson, April Ludgate or Ben Wyatt, they are all memorable and adored by fans of the series.

But for all of its moments of comedic gold, Parks and Rec also gave its fans many romantic scenes that served to make the show a classic. What are the best relationship moments in the history of the series?

Who would have thought that flu season would bring romance to Pawnee? In season 3, Leslie, Chris, and April are affected by the virus and forced to either stay in bed or be constantly tended to. While Ann takes care of Chris and April at the hospital, Ben does his best to keep Leslie alive while she refuses to rest in order to prepare for an important meeting regarding the Harvest Festival.

This episode plants the seeds for Ben and Leslie’s relationship, and at its end viewers get to see Ben bring Leslie waffles from her favorite diner along with chicken soup he made especially for her. It may not seem like much but it’s a very touching gesture from Ben, and Leslie takes notice. It is also right before the moment when Ben and Chris decide to stay in Pawnee longer, hinting that the both of them have found something special there, AKA Leslie and Ann.

The relationship between April and Andy is the first that fully flourished on the show. April fell for Andy’s sweet and goofy nature while he loved her unconditionally despite her cynical behavior. In the episode “Andy and April’s Fancy Party,” the young couple surprised their guests by announcing that what they thought to be a simple dinner party was actually their wedding.

RELATED: Andy Dwyer’s 10 Most Romantic Moments on Parks And Rec

As April and Andy had been only dating for a month, Leslie had some concerns about their decision to get married so soon, but they proved that they knew exactly what they were doing and that they were sure about each other. Although their wedding was out of the blue, these two were genuinely ready to commit and their wedding ceremony is one of the most heartwarming moments on the show.

8 Ben resigning to be with Leslie

Ben and Leslie made some questionable dating choices at the beginning of their relationship on Parks and Recreation, especially as they worked together as superior and subordinate and thus weren’t allowed to date.

In the episode “The Trial of Leslie Knope,” Leslie gets in trouble after she and Ben admit to Chris that they are in a relationship. Leslie is convinced she is going to get fired until she finds out that Ben quit his job in order to save hers and to be with her. In an official transcript of the meeting between Chris and Ben, Leslie finds out Ben told Chris he is in love with her, so she shows up at his house later that day to admit the same thing. It’s a particularly sweet moment that marks the true beginning of Ben and Leslie’s love story, and one of the most romantic things Ben ever did for Leslie, as he put their relationship before his personal ambitions.

7 Ron dressing up as a princess

In “How a Bill Becomes a Law,” Ron Swanson meets his future wife Diane when he comes to fix a pothole in front of her house. The two quickly hit it off, and while Andy is keeping company to Diane’s two daughters, he notices the sparks between her and Ron.

Andy convinces Ron to let the little girls dress him up as a princess to get Diane to like him, and the latter does it, although it goes against everything Ron Swanson stands for. It is a particularly romantic move coming from someone who usually is all about doing “manly” things. In the end, it pays off as Diane ends up asking Ron out… and in the long run, they end up getting married!

After torturing himself over a job offer that would keep him away from Leslie, Ben thinks about his future and makes a decision. In “Halloween Surprise” Ben comes back from Washington to Pawnee and proposes to Leslie.

He tells her that above everything else he wants to be with her forever and Leslie interrupts his proposal so that she can do her best to remember this moment forever. She doesn’t even let him finish asking her to marry him before she says “yes.” It’s a classic Ben and Leslie moment and one of the most romantic marriage proposals in the entire show.

Just like the beginning of their relationship, Leslie and Ben’s wedding was all over the place. In “Leslie and Ben” they try to plan a last minute wedding after a gala, but they keep hitting road blocks like an unfinished wedding dress and no rings, which prompts Ben and Leslie to reconsider their plan.

Everything comes together until councilman Jamm messes up the ceremony by throwing around stink bombs and getting into a fight with Ron. After the interruption, Leslie’s friends decide to move the ceremony to city hall to surprise her after she picks up Ron from the police station. Leslie and Ben get married in the Parks and Rec department and exchange lovely vows, proving once more that they are the sweetest couple in the show.

Ann and Chris had a very unconventional relationship. They dated, then broke up, then decided to have a baby together before getting back to dating. The episode “New Beginnings” is when their romance finally took a turn for the better. It initially features a scene during which Chris proposes to Ann while Larry is chocking on his lunch, and before long they end up in a jewelry shop to buy an engagement ring.

RELATED: 5 Times Chris Was Just Heartwarming on Parks And Rec (& 5 When He Was Just Plain Annoying)

But once in the store, they keep changing their minds about getting married before deciding that they don’t need to get a ring to reaffirm what they already know about their love for each other.The strength of it comes from the realness of their feelings, in the fact that Chris lets Ann “pee with the door open so that she “can watch the end of Grey’s Anatomy.” It’s a sweet moment for a couple that didn’t always have a lot of screentime.

Romance comes in many forms, and while some fans may not find Ron and Diane’s relationship particularly romantic, by their standards they did have plenty of loving moments in the show. The most heartwarming one might be the show’s cold open during which Diane told Ron she was pregnant and he pulled out a ring, admitting he had been waiting for their anniversary to “take her somewhere romantic” in a canoe that he had built solely for the purpose of asking her to marry him.

Next thing viewers know, Ron and Diane are marching up to the 4th floor of city hall to get a marriage license and proceed to get married. The shortest wedding ceremony is held, to Leslie’s great dismay, but it’s still beautiful in its own unique way.

After Leslie was removed from her job as a councilwoman, Ben spent most of his time in the episode “Second Chunce” trying to find the perfect gift to cheer her up. While Leslie is doing her best to find a way back on the city council, Ben considers many options before pulling out the big guns and organizing for them the ultimate present: a trip to Paris that fans get to see at the end of the episode.

There, they take a boat ride on the Seine, take pictures by the Arc de Triomphe, and visit the famous Pont des Arts to attach a lock with their initials on the popular lovers’ spot. If that isn’t the ultimate romantic gift, what is?

1 Donna establishing Teach Yo’ Self

Donna and Joe’s relationship did not get a whole lot of screen time on Parks and Rec. We saw them start dating and eventually get married but little of what happened in between, so in terms of how their romance evolved, a lot of it was off screen. In fact, one of the most romantic scenes between Donna and Joe isn’t even their wedding but something that happens toward the end of the show.

In the beloved series finale “One Last Ride” viewers see them in 2017 when they are now happily married and Joe just lost his job because his school decided to stop teaching math. Instead of going on vacation, Donna uses her wealth to set up an education non-profit and therefore start a new adventure with Joe, and it’s the most romantic thing Donna does for him.

NEXT: 10 Best Heartwarming Scenes Of Parks And Rec

Marine Perot is a freelance entertainment journalist specialized in TV and Film.

5 Friendships That Would Work (& 5 That Wouldn’t)